(RNS) — The Rev. Myrlande DesRosiers likens what has happened to Haiti in the past few months to biblical plagues: the mounting death toll of COVID-19, the assassination of the Haitian president and a massive 7.2 magnitude earthquake in August that left thousands dead on the island nation and reduced homes to rubble.

And this month, a fourth catastrophe: the mass deportation of Haitian migrants by federal agents along the U.S.-Mexico border.

It’s a belief in eventual deliverance that gives DesRosiers, founder of the Everett Haitian Community Center in Massachusetts, hope. “The day will come where God will elevate these people,” she said. “But in the meantime, we continue to do the best that we can and work with our partners to denounce the inhumane treatment.”

DesRosiers is one of several U.S. religious leaders who have lambasted the U.S. government’s treatment of Haitian migrants in recent weeks after mounted border agents were caught on video earlier this month as they swung leather straps at Haitians.

The images quickly went viral on social media, spurring a backlash from groups such as Faith in Action and the Council on American-Islamic Relations, who called for an investigation into the border incidents.

Then on Monday, CBS News reported that the U.S. has deported more than 4,000 Haitians in just nine days without allowing them the chance to seek asylum. Experts believe many of the migrants haven’t lived in Haiti for some time, having left years before to look for work in primarily South American countries.

In the days since, religious leaders have refocused on ending the deportations by prevailing on the administration to abolish a pandemic-era public health order known as Title 42, which was enacted under Biden’s predecessor, President Donald Trump.

Faith-based refugee resettlement groups such as Lutheran Immigrantion and Refugee Service and HIAS, formerly the Hebrew Immigrant Aid Society, have assailed the policy, with HIAS officials referring to it as “disastrous.”

Bishop Mario E. Dorsonville, chairman of the U.S. Conference of Catholic Bishops’ Committee on Migration, and Sister Donna Markham, head of Catholic Charities USA, issued a statement, saying that use of Title 42 “undermine(s) the vulnerability of those against whom they are applied.” 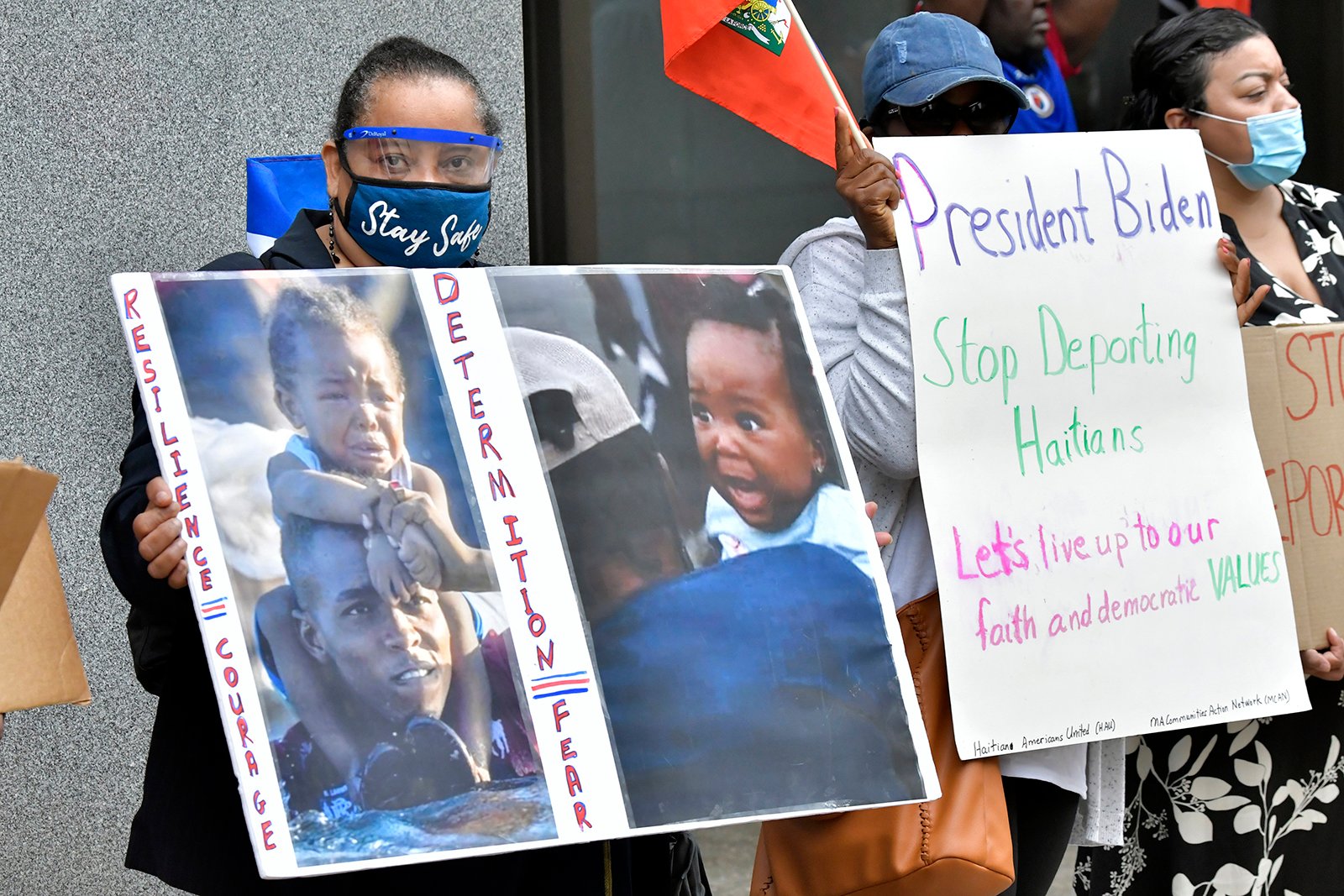 Haitian-Americans, including Clare Raymond of Boston, left, during a demonstration at the JFK Federal Building in Boston on Friday, Sept. 24, 2021. Members of Boston’s sizable Haitian community staged a protest outside the Federal building to denounce the mistreatment of Haitian migrants at the border with Mexico. (AP Photo/Josh Reynolds)

RELATED: ‘Insular’ Orthodox Jews mobilize to save lives, from Haiti to Kabul

“We are American faith leaders from six different faith traditions, including yours,” read the letter, which was distributed with Auburn Seminary. “We see our nation continuing to spectacularly fail in welcoming the stranger, something clearly and repeatedly called for by every one of our faiths, including yours.”

One of its signers, the Rev. Jennifer Butler, head of the advocacy group Faith in Public Life, said the U.S. government should welcome migrants “with dignity, not drive them away with violence and callousness.”

“We call on the Biden administration to hold Border Patrol accountable for abuses, halt all deportations to Haiti, and end the use of Title 42,” Butler said in a statement.

In addition, efforts are being made to extend Temporary Protected Status to Haitians fleeing the country’s mounting disasters. The Rev. Dieufort J. Fleurissaint, a Boston pastor who heads a Haitian advocacy group, said he and others have been advocating for an expansion of TPS status at least since the earthquake in August.

The Biden administration did extend TPS status for about 150,000 Haitians already living in the U.S. earlier this year, but the measure generally doesn’t apply to those at the border.

Fleurissaint, who spent much of last week in Washington advocating alongside other immigrant rights activists, said he spoke with a dozen Haitian migrants on Monday who made it through the U.S. immigration system.

For many who make the trek to the border, he said, faith plays a key role. “Because of their trust in God, this is how they made the perilous trip through seven or eight different countries,” he said. “They went through jungles. They went through rivers. They walked at night. They spent many days without eating. So their faith basically took them there.”

Meanwhile, several religious organizations are working to settle Haitian migrants who have arrived in the Boston area. DesRosiers said her group is assisting with efforts to provide access to health care and overall orientation. They are one of several faith groups that have offered such aid, including some along the border that operate in partnership with the U.S. government.

But as the “plagues” persist, so does advocacy: DesRosiers said her group joined other Boston-area Haitians on Saturday for a rally to denounce the treatment of Haitian migrants.

“We still believe that we should not lose hope,” she said. “We will continue to do what we need to do in terms of advocacy here in the States. We still need to continue to do the organizing.”