HOLLYWOOD, Calif. (RNS) — Against the backdrop of the famed Hollywood Sign lies the Monastery of the Angels, where for nearly a century, a community of cloistered Dominican nuns have devoted their lives to study Scripture and to pray for those who come to them for guidance and penance.

But the community is dwindling as the nuns age and after some died from COVID-19 and other causes. Neighbors and preservationists fear the four-acre property — that many refer to as a “retreat” and an “oasis” amid the clamor of the city — is at risk of closure or being sold.

An online petition seeking to save the monastery has garnered more than 3,300 signatures as of Thursday night (Dec. 9). Los Angeles residents say the monastery is “loved by people of all faiths” and represents “kindness in an ocean of distraction, indifference and preoccupation.”

RELATED: In a rare move, Catholic nuns set out to build a new monastery

Founded in 1924 by a New Jersey nun, the Monastery of the Angels has received financial support from wealthy L.A. families and celebrities such as the Doheny’s, through the Carrie Estelle Doheny Foundation, and the late actress Jane Wyman, through the Jane Wyman Charitable Foundation.

The nuns also bake and sell their famous pumpkin bread, peanut brittle, chocolate mints and other treats at the gift shop. The smell of baking pumpkin bread emanates from the monastery.

Supporters of the monastic community are asking leaders of the Archdiocese of Los Angeles, the Dominican Order, and of the North American Association of Dominican Monasteries to prevent its potential closure or sale. 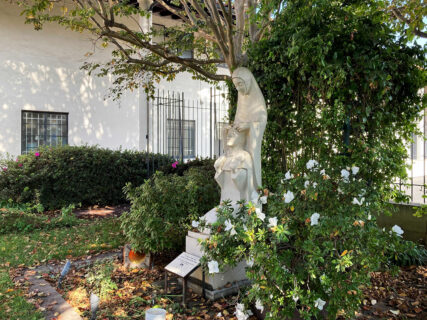 A statue of “Our Blessed Mother Mary Inspiring St. Dominic with the Rosary” stands at the Monastery of the Angels, a donation from the late actress Jane Wyman. RNS photo by Alejandra Molina

Los Angeles’ archdiocese does not have jurisdiction over the monastery, nor may it interfere with its governance, the archdiocese said in a statement. However, local prioress Sister Maria Christine — president of the Association of North American Dominican Monasteries — told Religion News Service no decision has been made to sell. The situation is “fluid,” she said, adding that “we’re looking at many options and trying to find the best suitable resolution.”

Currently, five nuns reside in the monastery, and the prioress said that is not enough to sustain the community’s “democratic way of life.” In recent years, Christine said, the monastery has lost a total of eight sisters, including three who died from COVID-19. None of the sisters are forced to transfer to a care facility or to another Dominican monastery, she said.

Still, stories have circulated about frightened nuns expressing distress over a potential move.

Sheryll McGinest’s biological sister, Sister Mary Gabrielle, is one of the concerned nuns.

Through her sister, who she speaks with at least once a week over the phone, McGinest has heard of plans to put the monastery up for sale. McGinest, who lives in L.A., said they also want to place her 74-year-old sister, who is the only African American nun at the monastery, at the retirement center St. John of God. The center, she said, is referred to as the place where “nuns are sent to die.”

“She doesn’t want to go there,” McGinest said.

Although her sister needs a walker to get around, McGinest said that “she has lots of life left.”

Ideally, she said her sister would like to stay at the monastery, and if not, she wants to live with McGinest. But McGinest said she doesn’t have an available room, and with high L.A. living costs it would be difficult to “uproot her life and move” somewhere else.

“She’s feeling misplaced, and they are not making it clear to family what is happening to our sister,” McGinest said. 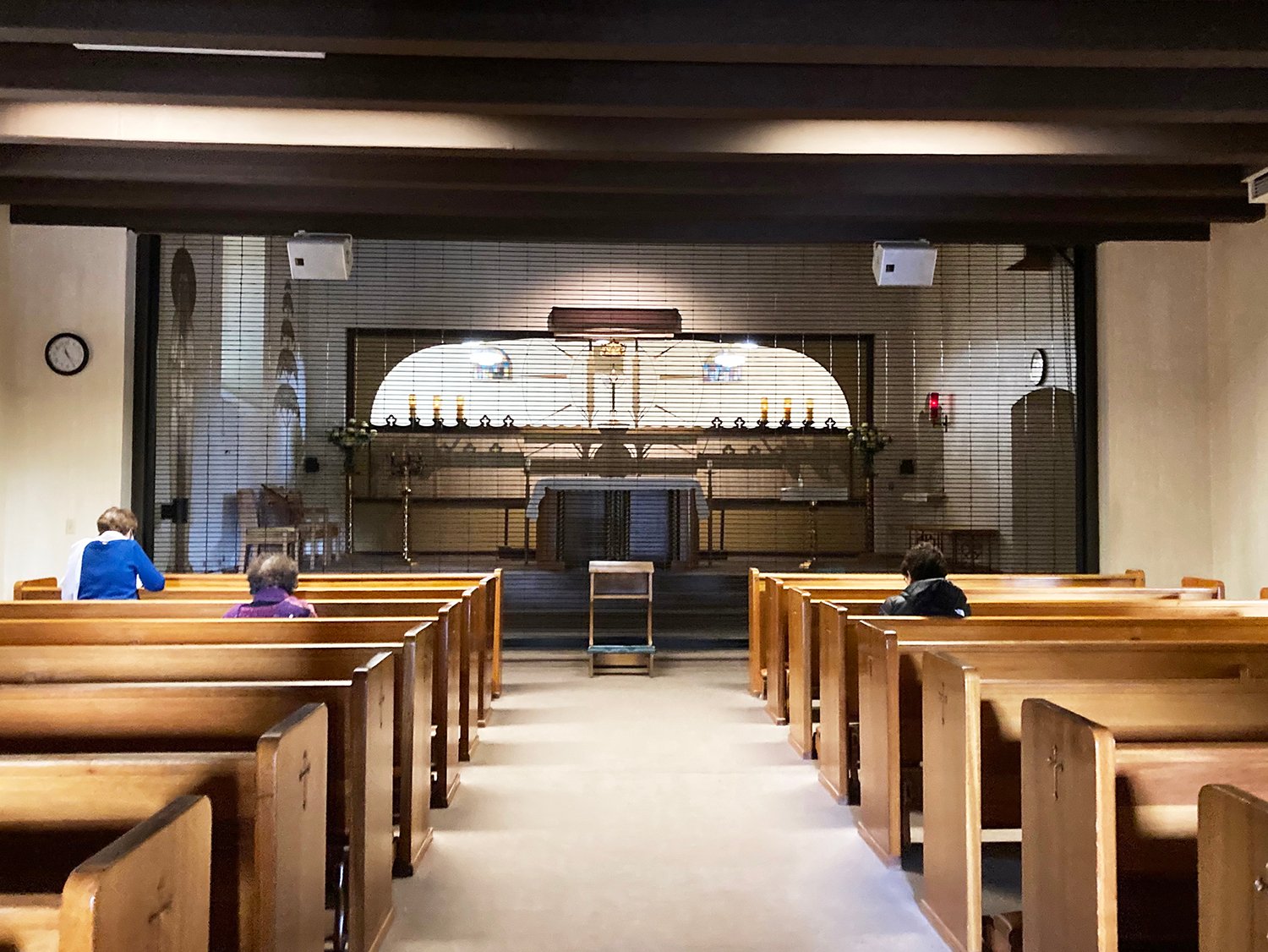 A handful of people visit the chapel on Wednesday, Dec. 8, for midday prayer at the Monastery of the Angels. RNS photo by Alejandra Molina

Among those leading efforts to preserve the monastery is Theresa Baker, whose father worked as a groundkeeper there in the late 1940s. Baker recalls childhood trips to the monastery as a “treat,” visiting the nuns and participating with her siblings in the May processions for the Virgin Mary. As she got older, it became a place for prayer.

“If you were sick, or if you knew someone who was sick, someone who had passed away, you could just pick up the phone and call and ask for their prayers. In my opinion, you can’t have more powerful prayers going up for your intentions than at the Monastery of the Angels,” Baker said. “It’s just that special and that real.”

Throughout the years, Baker kept in touch with one particular nun, Sister Mary St. Pius, who Baker said died after contracting COVID-19. Baker would call the monastery, especially in the height of the pandemic, and ask if the nuns were in need of anything. After the sister’s death, Baker stopped calling as often, until she decided to check in this summer in August. That’s when she learned of concerns about the monastery potentially closing down.

To Baker, it would make sense to bring in more nuns to help sustain the community.

“Surely, there is something that can be done to bring nuns from other areas. L.A. is diverse, with nuns from different countries. If we can’t get any local L.A. vocations, or from California, or anywhere nearby, maybe from other countries,” Baker said.

Sister Maria Christine said she is looking into it and talking with other religious communities to see if they have enough sisters who could manage the monastery, but, she added, “We’re looking at all options, and that’s included in the options.”

Christine said the handful of nuns left in the monastery are not sufficient to have “a balance and a choice when you make decisions.”

“For Dominicans … we come together for prayer, for Mass, for liturgy, for singing, for everything. And, you count on your sisters to form that community,” she said. “When you become very small, that becomes a problem.”

The prioress also noted in Angelus News, the news outlet of the Archdiocese of Los Angeles, that a majority vote of the nuns favored the closure. Christine said the nuns wouldn’t be allowed to speak about the matter with the press. McGinest, whose biological sister lives at the monastery, wasn’t aware of there being such a vote.

“This has been a process that has been going on for at least four years. It’s nothing sudden,” the prioress said. “It’s nothing new, but we had not gone public because this is a private business for the sisters. They’re cloistered nuns. This whole decision process is their process, not the public’s process.” A past group of nuns at the Monastery of the Angels. Courtesy of Sheryll McGinest

Dawn Eden Goldstein, a Catholic theologian studying canon law, has been monitoring the situation at the monastery and believes this process should be transparent.

Goldstein said donors should be informed during a process of closing and selling a building owned by the church, “and that doesn’t seem to be happening here, at least not yet.”

“There are many questions that supporters of the monastery as well as the L.A. historical-preservation community would like to have answered,” Goldstein said.

Richard Schave and Kim Cooper are a husband-and-wife team who run Esotouric — a tour company that explores the city through an architectural, historical and spiritual lens. Their spiritual L.A. tour includes Hindu and yoga temples as well as the Monastery of the Angels.

To Schave, “our morals, our inclinations to social outreach” emerged from monastic orders.

“I’m hoping that Archbishop Gómez can be empowered by the Dominican Federation to bring in another Catholic contemplative community into that space,” Schave added. Carlos Sanchez, general manager of the Monastery of the Angels, said he hopes the monastic community remains in Hollywood. RNS photo by Alejandra Molina

As for Carlos Sanchez, general manager at the Monastery of the Angels, he just wants the “truth to come out.”

“Is it easier to sell? Why not do the hard thing and help it survive?” asked Sanchez, who’s been working at the monastery for more than 20 years.

Sanchez does everything from managing the people coming in and out of the monastery and ordering items for the baked goods to fixing repairs and promoting the work of the nuns to the Hollywood Chamber of Commerce.

“I hear a lot about people calling the sisters ‘prayer warriors’ because that’s what they do, they pray for the people. I’m proud to work with the sisters,” he said.

Sanchez is inspired by the nuns, “by the way they live.” Amid concerns for the future of the monastery, Sanchez said he won’t look for another job. Sanchez said he feels like a “byproduct of the sisters.”