There must be one person in this country who has been willing and able to totally miss out on the two major sports events that have been happening this past week. I refer to the Winter Olympics and the Super Bowl.

I am that person.

I have quasi-moral reasons for sitting those events out.

I have often enjoyed the Winter Olympics, and in a normal year, I might have even watched some of the events.

Alas, this is not a normal year. I refused to watch the Winter Olympics from Beijing, knowing full well that they have served as an elaborate sidebar to China’s horrendous human rights violations – in particular, the arbitrary detention, torture, and forced labor of millions of Uyghurs and other Turkic groups.

There are few things as majestic and as exciting as the Olympics. They celebrate the international and universal value of sportsmanship and striving.

But, Jews know that there has been a dark side to those international games.

In 1936, Hitler used the Summer Olympics in Berlin as a public forum to promote antisemitism and Aryan racial supremacy. Jews were prohibited from competing, and when the Black athlete Jesse Owens won several gold medals, the German leader publicly snubbed him.

36 years later, in 1972, at the Summer Olympics in Munich, Palestinian terrorists kidnapped and killed Israeli athletes. Avery Brundage, who had been the president of the International Olympic Committee, demanded that the games continue without pause, as he had previously fought against the proposed boycott of the Berlin Olympics in 1936.

So, when it came to the Winter Olympics in Beijing – no.

And, the Super Bowl?

In this country, sports is a national religion. To make a statement against sports, or against a particular sport, constitutes an act of heresy.

Therefore, let me make a confession: I am not a football fan, though I have often loved the Super Bowl half time shows.

But, as for football itself, let us be honest and admit that the game constitutes a serious ethical challenge.

In a study of former football players published in The American Journal of Sports Medicine in August, Andrea L. Roberts from Harvard University’s T.H. Chan School of Public Health concluded that “the data suggest that seasons of play and playing position in the NFL are associated with lasting neuro-psychiatric health deficits … depression, and anxiety appear to be associated with concussion in the long term.

My esteemed colleague, Rabbi Stephen Fuchs, goes so far as to call the Super Bowl “the Concussion Bowl.”

There are effects on kids who play football as well. In 2013, researchers from the University of Washington and Seattle Children’s Hospital found that adolescents with a history of concussion were more than three times more likely to experience depression in their lifetime than their uninjured counterparts.

If I say that I am opposed to organized violence as public entertainment, I do so out of an ancient pedigree.

Several summers ago, while on my way to Jerusalem, I stopped over in Rome. On my first day in Rome, I walked over to the Coliseum, which had been built by Jewish slaves.

But, while I walked through the Coliseum, thinking of the movies Gladiator and Ben Hur, marveling at the ancient architecture, a piece of me winced.

The Coliseum was the great cultural center of ancient Rome. It drew its appeal from gladiator contests and lions eating Christians. The gladiatorial games featured fights to the death, matching man against man, man against beast, and beast against beast.

As Stewart Rubin wrote in his essay, “Jewish Opposition to the Ancient Gladiatorial Games,”

Romans regularly organized fights to the death between hundreds of gladiators, the mass execution of unarmed insurgents, captives, or criminals and the indiscriminate slaughter of domestic and wild animals.

Gladiatorial fighting took place in amphitheaters throughout Rome and its provinces. Historians estimate that there were a total of 400 arenas throughout the Roman Empire at its greatest extent, with a combined total of 8,000 deaths per year from all causes, including combat, execution, and accidents.

Let us now turn to a text in the Talmud (Avodah Zarah 18b), in which the ancient rabbis asked the question: Should Jews be permitted to attend gladiatorial games?

The majority of rabbis said: No.

But, some rabbis thought differently.

Not only can Jews go to the Coliseum.

Because if you go to the Coliseum, and you see a gladiator gravely wounded, with his opponent standing over him, ready to finish him off – what happens?

So, why should you be in the Coliseum?

Because you have a job to do.

You must scream out: Spare him! Let him live!

Perhaps it would be your scream that would save the life of the wounded man.

You, in the crowd of callous people – perhaps the emperor will hear you.

Here is the amazing thing.

Rome did not lack for sensitive individuals — poets and playwrights and philosophers.

But, almost none of them protested this madness.

The Jews were the only people in the Roman Empire who dared open their mouths in protest against this barbarism.

That Talmudic text was the first Jewish critique of mass culture. It served as a Jewish protest against violence.

It did not advocate censorship. It did not say that the games should not exist.

But, it did say that there were certain things that Jews should not do – because those things violated Jewish values.

And yet, it would be easy for Jews to simply withdraw from the ambient culture, as much as is possible. Some Jews do precisely that.

The passage from the Talmud actually counsels against that. It says: No, don’t stay away! Show up! Make your voice heard! That is what it means to be a Jew in the world! Perhaps your single, solitary cry will be the cry that spans the distance between life and death.

That would be my Judaism.

Not one of withdrawal from the world.

But, one of active protest.

You never know whether it will be your voice that turns the moral tide. 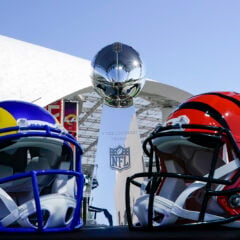 Opinion
Rams or Bengals? The annual divining of the Super Bowl victor through sacred texts. 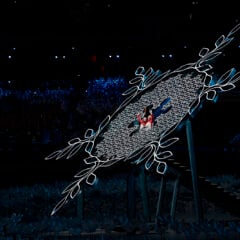