(RNS) — It is unusual for a world Muslim leader visiting the United States to request to meet with local Christian leaders. But King Abdullah II of Jordan has his responsibilities: The Hashemite king, whose lineage goes back to the Prophet Muhammad, is also the custodian of Muslim holy places in Jerusalem, via a religious trust known as the Waqf Council.

On Monday (May 9) in New York, the king met with a group representing American Catholics and several mainline and African American Protestant denominations, as well as Armenian and Greek Orthodox Christians, to discuss a host of issues — from taxation to the renovation of Christ’s tomb and the Chapel of the Ascension at the Mount of Olives. He also met with affiliates of some evangelical Christian groups that have been seeking full recognition in Jordan.

But the meeting with Christian leaders was primarily aimed at paving the way for crucial discussions in Washington later this week about mounting tensions at Al-Haram Al-Sharif, which is the third holiest site in Islam and includes the Al-Aqsa Mosque.

The 35-acre mosque compound, known to Jews as the Temple Mount, constitutes some of the most contested real estate in the world. Its ownership and visitation rights are governed by a centuries-old dictate known as the Status Quo Agreement.

In recent years radical Jewish nationalists have been demanding a right for Jews to pray in groups on the grounds of the mosque, in violation of both the Status Quo Agreement and a 2014 promise by then-Prime Minister Benjamin Netanyahu to respect its parameters.

Israeli officials say they are committed to the agreement, but since October 2000, when they removed the Waqf’s guard from the mosque compound’s Moghrabi Gate, the Israeli authorities have allowed whomever they choose to enter. Groups of Jews have become increasingly bold about not only praying but holding ceremonies on the plaza outside the mosque. 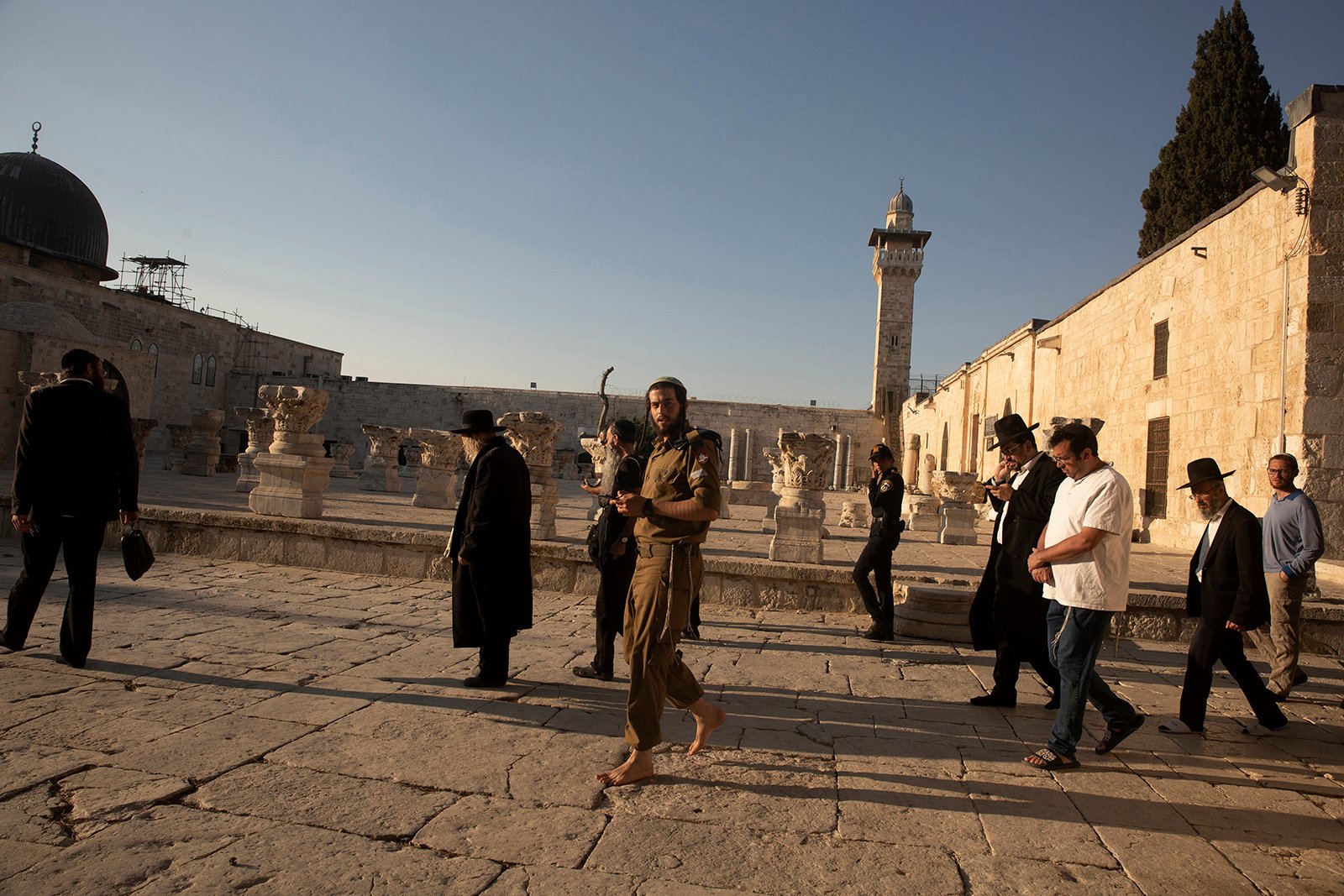 Religious Jews arrive to pray at the Temple Mount, known to Muslims as the Noble Sanctuary, in the Old City of Jerusalem, Aug. 2, 2021. (AP Photo/Maya Alleruzzo)

Reconfirming the status quo in Jerusalem will require some hard diplomacy and a lot of goodwill. The latter seemed to be the point of the king’s meeting in New York with church leaders.

Kyle Cristofalo, senior director of advocacy and government relations for Churches for Middle East Peace, which helped put together the gathering, said that the Christian representatives were deeply grieved by the ongoing assaults against the status quo and affirmed the commitments of their respective communities to work for harmony and justice for all who live in the Holy Land.

“The daily violations of human rights and religious freedom against Christians and Muslims in the Holy Land must stop,” Cristafalo said. “So too must the occupation. We look forward to continuing to work with His Majesty in the service of a future in which all Palestinians and Israelis are able to flourish.”

In a statement, the Rev. A. Roy Medley, general secretary emeritus of American Baptist Churches USA, said he had “expressed on behalf of Baptists our dismay when religion is weaponized to demean, divide, and destroy.”

RELATED: Why is Islamophobia wrong at home and acceptable against Palestinians?

But the difficult diplomacy remains. Israel has finally acquiesced to Jordan’s repeated requests to talk about the use of the Al-Aqsa plaza. When King Abdullah visits Washington on Friday, and during President Joe Biden’s upcoming visit to Israel, the powers involved will need to work out a formula that will preserve the rights of Muslims and Christians at their holy sites while keeping them open for well-intentioned visitors.

(Daoud Kuttab is a Christian Palestinian from Jerusalem. He is a former Ferris Professor of Journalism at Princeton University. Follow him on Twitter@daoudkuttab. The views expressed in this commentary do not necessarily reflect those of Religion News Service.)