(The Conversation) — The word “evil” circulates widely in the wake of terrible public violence. The May 24, 2022, massacre at an elementary school in Uvalde, Texas, is a case in point.

Texas state safety official Christopher Olivarez spoke of “the complete evil of the shooter.” Others expressed their resolve with the same word. “Evil will not win,” the Rev. Tony Grubin told the crowd at a vigil.

Days later, at the National Rifle Association’s convention in Texas, CEO Wayne LaPierre acknowledged the Uvalde victims before arguing against gun control legislation. His reasoning pivoted on the concept of evil: “If we as a nation were capable of legislating evil out of the hearts and minds of criminals who commit these heinous acts, we would have done it long ago.”

Evil is one of the most complex and paradoxical words in the English language. It can galvanize collective action but also lead to collective paralysis, as if the presence of evil can’t be helped. As a philosopher studying moral concepts and their role in communication, I find it essential to scrutinize this word.

The evolution of ‘evil’

Evil wasn’t always paradoxical. In Old English it was simply the common word for bad – for any kind of misfortune, illness, incompetence or unhappy result. This meaning lingers in phrases such as “choosing the lesser of two evils.”

Starting around 1300, the word bad gradually emerged as the familiar opposite of good. Yet even while bad was becoming common, people continued to encounter the word evil in older written works, and speech influenced by these works. Translations of the Bible and Anglo-Saxon classic literature surely shaped how the concept of evil came to seem larger than life, and spiritually loaded. Some things seem too bad for the word bad. But what, exactly, does evil mean?

Many people would answer that they know evil when they see it – or when they feel it. If there’s any good occasion for using the word, surely a planned massacre of vulnerable children seems an uncontroversial case. Still, this commonsense approach doesn’t shed much light on how the idea of evil influences public attitudes.

One philosophical approach – pragmatism – may be helpful here, since it focuses on how words do things, rather than on how they should be defined. People who use the word evil are doing something: sending a clear signal about their own attitude. They are not interested in excuses, justifications or coming to some kind of shared understanding. In this pragmatic sense, the word evil has something in common with guns: It’s an extreme tool, and users require utter confidence in their own judgment. When the word evil is summoned to the scene, curiosity and complexity go quiet. It’s the high noon of a moral standoff.

As with reaching for guns, however, resorting to the word evil can backfire. This is because there are two deep tensions embedded in the concept.

First, there’s still some confusion about whether to locate evil out in the world, or within the human heart. In its archaic sense, evil could include entirely natural causes of great suffering. The Lisbon earthquake and tsunami of 1755 is an infamous example. Tens of thousands of people died agonizing deaths, and thinkers throughout Europe debated how a good God could allow such terrible things. The French philosopher Voltaire concluded, “evil stalks the land.” 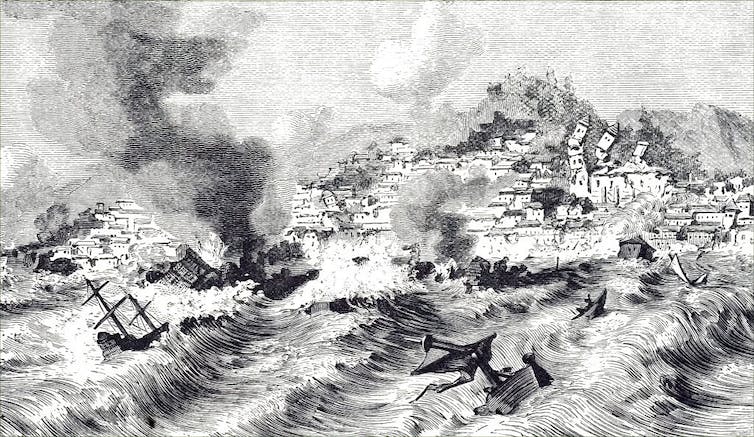 An 18th-century engraving depicts the destruction of Lisbon, Portugal, by an earthquake and tidal wave in 1755.
Universal History Archive/Universal Images Group via Getty Images

At the opposite extreme, many Christian thinkers – and some classical Greek and Roman ones – treat evil as entirely distinct from worldly events. The 18th-century German philosopher Immanuel Kant, for example, defines evil as an inner moral failure, which might lurk behind even the most acceptable-looking acts. Given his faith that innocent victims would go to heaven, Kant did not focus moral concern on the fact that their lives were made shorter. Rather, he argued murder was terrible because it was the expression of a morally forbidden choice.

Most people today would reject both of these simple views and focus instead on the connection of inner and outer, where human choices result in real-world atrocities.

Yet the purely inner view casts new light on LaPierre’s argument, that legislation is powerless to prevent evil. If evil were strictly an interior, spiritual problem, then it could be effectively tackled only at its source. Preventing that evil from erupting into public view would be like masking the symptoms of a disease rather than treating its cause.

The paradox of blame

There is a second major tension embedded in how the word evil works: evil both does and does not call for blame.

On one hand, evil seems inherently and profoundly blameworthy; evildoers are assumed to be responsible for their evil. It’s constructive to blame people, however, when blame helps to hold them responsible. Unfortunately, that important role is undermined when the target of blame is “evil.”

Philosopher Gary Watson helps illuminate this paradox in his essay “Responsibility and the Limits of Evil.” Blame involves attempting to hold people responsible as members of a shared “moral community” – a network of social relations in which people share basic norms and push one another to repair moral expectations after they are violated. Taking responsibility, in Watson’s view, involves a kind of competence, an ability to work with others in community.

Evil, however, implies being beyond redemption, “beyond the pale” of this community. Calling someone evil signals a total lack of hope that they could take up the responsibility being assigned to them. And some people do seem to lack the social bonds, skills and attitudes required for responsibility. Examining the life story of a notorious school shooter, Watson reveals how his potential for belonging to a moral community had been brutally dismantled by chaotic abuse throughout his formative years.

If evil implies such a complete absence of the skills and attitudes required for moral responsibility, then calling people evil – while still holding them morally responsible – is paradoxical.

Compare this with the paradoxical power of the number zero – a quantity that is the absence of quantity. Zero is a powerful concept, but it requires a warning label: “Steer clear of dividing by this number; if you do, your equations are ruined!”

The English word evil is powerful, no doubt. Yet the power of the concept turns out to be driven by turbulence below the surface. Laying blame on evil can bring this turbulence to the surface in surprising ways.

(Elise Springer, Associate Professor of Philosophy, Wesleyan University. The views expressed in this commentary do not necessarily reflect those of Religion News Service.)