(RNS) — Marooned in their homes, many Americans made the best of the early days of the pandemic by sorting through old boxes of family artifacts. One Saturday morning in March 2020, Dan Larsen and his wife were doing just that when they discovered the world’s only verified photographic image of Mormonism’s founder, Joseph Smith Jr.

Larsen, 79, is a great-great-grandson of Smith, who was killed by a mob near Nauvoo, Illinois, in 1844. Among the effects passed down to Larsen was a pocket watch that bore the initials of his great-grandfather Joseph Smith III, the prophet’s oldest son and founder of the Reorganized Church of Jesus Christ of Latter Day Saints, now called Community of Christ. There was also a second object, a locket that resembled a pocket watch.

When Larsen inherited the locket shortly before his mother’s death in 1992, its finial was bent and he was not able to open it, so he put it away for safekeeping.

While riding out pandemic shutdowns in 2020, he and his wife embarked on a project of sorting through items collected from both sides of their family. “I was a little hesitant” about prying the locket open, Larsen told Religion News Service in a phone interview. But he was soon able to wrest it open and shine a penlight inside.

Expecting to find a watch face, he was stunned to see the face of a man.

“In my mind, there was no question who it was,” Larsen said. He felt sure he was staring into the eyes of Joseph Smith Jr. For years, historians had speculated about the possibility that a photographic image of Joseph Smith was out there somewhere, based on claims various Smith relatives had made, and an advertisement from the 1850s.

Larsen felt certain he’d found such a photo. And because the locket had been closed up tight for decades, protected from light, the image was still remarkably clear. 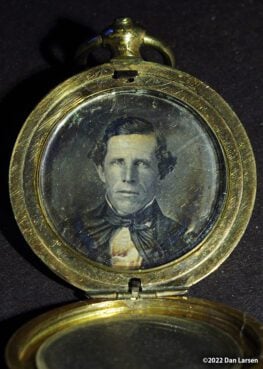 An heirloom locket with a daguerreotype of Joseph Smith Jr., possibly from May or early June of 1844, discovered by Smith’s great-great-grandson Dan Larsen. Photo © 2022 Dan Larsen. PHOTO NOT AVAILABLE FOR PUBLICATION.

What followed was more than two years of verification. Larsen called his nephew, the historian and Community of Christ apostle Lachlan Mackay, to help him assemble experts and test the hypothesis that the image was that of Smith. Mackay joined forces with historian Ron Romig, the retired chief archivist for Community of Christ.

In an article in the spring/summer issue of The John Whitmer Historical Association Journal, out Thursday (July 21), the two historians detail the steps they took to authenticate the daguerreotype.

They hired facial recognition experts to compare the daguerreotype to Smith’s death mask. The company reported back that 19 of 21 measured features matched, within a 95% confidence interval.

Another expert compared the daguerreotype’s facial features with those seen in the most famous oil painting of Joseph Smith, noting that the hairline and other features were a match and that both images showed the same “distinctive frown line near the left eyebrow,” the article states.

Meanwhile, Mackay and Romig tried to verify the find through historical research. Now that they knew the long-rumored daguerreotype was housed inside a locket, they realized that it had, in fact, been “hiding in plain sight” all this time.

“The locket shows up on prominent Smith family women through the years,” Mackay said. Bertha Madison Smith, who married one of Joseph Jr. and Emma’s sons, wore it in a portrait in 1869. In 1875, a granddaughter wore it in her wedding portrait, in which the locket was hanging from a chain.

It’s believed that the locket remained in Emma’s possession until her death in 1879 and that she loaned it to female family members for special occasions. It eventually made its way to the family of the RLDS prophet Fred M. Smith (1874–1946), Joseph Jr.’s grandson and Larsen’s grandfather.

Mackay and Romig also investigated links to the likely photographer, a man named Lucian Foster. A Mormon branch president in New York City in 1839, when daguerreotypes first reached U.S. shores, Foster was an expert in the craft by the time he moved to Nauvoo to join his fellow Mormons in April 1844. Since he rented a room in the prophet’s home, he had close proximity to the Smith family. Experts think it’s during the brief period of May or early June of 1844 that Smith had Foster take his picture.

Now it’s time for the photo’s story to be told.

Larsen kept his discovery of the daguerreotype under wraps during the verification process. Few people other than the experts have seen the image. He and Mackay are planning to give a presentation about the daguerreotype at the Smith family reunion in Nauvoo in early August, telling other Smith descendants about the image’s history and the way it was passed through the family.

David Howlett, a professor of religion at Smith College and the author of “Kirtland Temple: The Biography of a Shared Mormon Sacred Space,” got a preview of the presentation and believes the evidence is strong. “I think that they’ve been very careful, and they make a convincing, plausible case for this,” he said.

Larsen would not say definitively what would happen to the locket and the Smith image next. “I probably won’t speculate on that right now, but I have to say that I feel that the original artifact needs to be in Salt Lake with The Church of Jesus Christ of Latter-day Saints, which I am now a member of,” he said. He grew up in the RLDS church but converted to the Utah-based LDS church about eight years ago.

The few people who have seen the image so far have been struck by Smith’s eyes. “If you look at the picture, and those eyes, it’s mesmerizing,” Larsen said.

Mackay agreed. “I think for generations, people have wondered what Joseph looked like. Where was the charisma that people talk about? What was it about this man that caused people to follow him through incredible difficulty through the years? I think I can see through the eyes what might have induced those people to follow him. Parley P. Pratt and others talk about Joseph Smith’s eyes, his gaze, the way he could almost look right through you. And I think I see that.”

The new issue of The John Whitmer Historical Association Journal is available for $15 as a downloadable PDF or $25 in print form.

Correction: An earlier version of this story conflated the pocket watch that was monogrammed with Joseph Smith III’s initials on it with the locket housing the daguerreotype that is believed to be of Joseph Smith, Jr.

The Mormon reinvention of Emma Smith 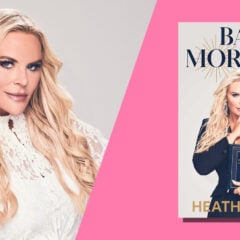