DURHAM, N.C. (RNS) — Eli N. Evans, a noted chronicler of Jewish life in the South, was buried Friday (July 29) in his native Durham, North Carolina. The 85-year-old memoirist died July 26 at a hospital in New York City. He was 85.

The cause was complications from COVID-19.

Evans was born to a prominent Jewish family in Durham and wrote endearingly of his family’s minority status in the Christian-saturated South in his book, “The Provincials: A Personal History of Jews in the South.” The book was published in 1973 and released again in 1997 and 2005. He followed that up with “The Lonely Days Were Sundays,” published in 1993.

Abba Eban, the 20th-century Israeli scholar and diplomat, wrote in praise of Evans’ second memoir, saying, “The Jews of the South have found their poet laureate.”

Evans described Southern Jewish in warm, nostalgic terms. Though he never denied the presence of antisemitism, he personally experienced far more philosemitism — the love of Jews — among his fellow Southern Baptists and other evangelicals. Though some would try to convert him, he wrote that he was never offended by such gestures, which he felt were undertaken out of love and concern for his salvation. 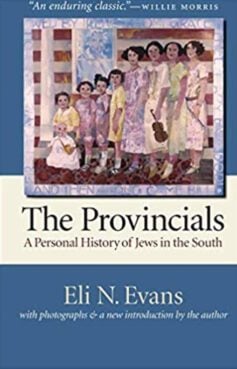 Eli Evans’ book “The Provincials: A Personal History of Jews in the South.” Courtesy of Amazon

“The history of Jews in the South lies not in the cross-burnings of the Ku Klux Klan, the bombings, the acts of overt anti-Semitism,” he wrote in the introduction to “The Provincials.” “It is found in the experience of growing up Jewish in the Bible Belt, the interior story reflected in family histories and tales and letters home.”

For his book, he traveled widely across the South recounting the first Jewish settlements in South Carolina and the booming Jewish community of Atlanta, Georgia. He described how Jews came to Durham after James Buchanan Duke made a trip to New York City to offer Russian immigrant Jews jobs rolling cigarettes in his new Durham factory, and how they prospered there, eventually becoming traders and wholesalers.

Evans himself left the South after earning his undergraduate degree from the University of North Carolina at Chapel Hill, where he was also elected president of the student body. He returned frequently but made his home in New York City. After law school at Yale, he was a speechwriter for President Lyndon B. Johnson, an executive at the Carnegie Corporation and later president of the Charles H. Revson Foundation, a philanthropic organization, from 1977 to 2003.

He never forgot his alma mater and was founding chair of the advisory board for the Carolina Center for Jewish Studies. He also kept his membership at Beth El Synagogue.

But he famously observed that few children of Southern Jewish shopkeepers wanted to remain in the family business, saying, “Fathers built businesses for sons who did not want them.” The Evans store is long gone. Today’s Southern Jews are far more economically and professionally diverse.

Evans wrote that even after leaving the South he could not escape its hold on his imagination. “With such entanglements, a native son remains irredeemably and endurably Southern.”

Even at the birth of Evans’ son, Joshua, in a New York City hospital, he clutched a vial of North Carolina soil, so connected was he to the South. “I wanted him to know his roots,” he wrote, “and I believe that one had to begin to create family legends early.” 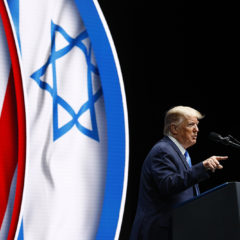 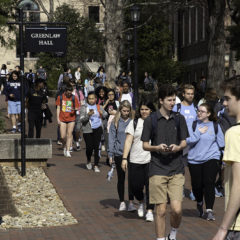 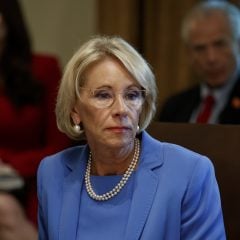 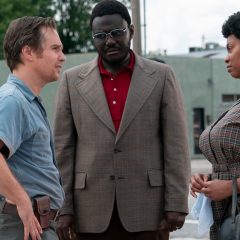 News
‘Best of Enemies’: Real faith and racial reconciliation on the big screen