Former Indianapolis Colts coach Tony Dungy and his wife, Lauren, walk off the field after Dungy was inducted into the Colts Ring of Honor during an NFL football game in Indianapolis, Monday, Nov. 1, 2010. Indianapolis Colts president Bill Polian is at left, while Colts owner Jim Irsay is at right. (AP Photo/Darron Cummings)

(RNS) — Retired NFL coach Tony Dungy and his wife Lauren see the key parts of their life — football and family — as forms of ministry.

The parents of 11 both lead Bible studies in addition to his work as a broadcaster on NBC’s “Sunday Night Football” and hers as vice president of the Dungy Family Foundation.

Their new book, “Uncommon Influence: Saying Yes to a Purposeful Life,” set to release on Aug. 9, aims to help people see their family, neighborhoods and workplaces as platforms where they can have a positive effect.

“Many people think ‘Oh, I don’t influence anybody,’” said Tony Dungy, the first African American head coach to win the Super Bowl. “The reason why we wrote this book was to encourage people to know that they can have influence. They do have influence.”

Married 40 years, Tony Dungy, 66, and Lauren Dungy, 65, gradually parented a growing family, modeling their support of adopting children and fostering “countless” kids. They describe themselves as “born-again” Christians who attend nondenominational evangelical churches in Tampa, Florida, and Eugene Oregon, where they spend part of the summer.

They talked to Religion News Service in mid-July about their joint prayer life, race and the NFL, and supporting pregnant women in the wake of the Dobbs decision overturning Roe v. Wade.

RELATED: Faith at the Olympics: Does it give an athlete an edge?

In your new book, you both write about ways to live purposefully in everyday life. Tony, could you describe what seems like a prayerful approach to people-watching that you mentioned in your book? 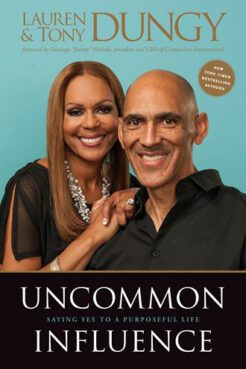 Tony Dungy: For me, it’s always been: What can you do to make an impact in your community, in your family and your job and that is helping people get better? That’s something I always enjoyed as a coach. And so that’s what I look at nowadays. Sometimes you have to pray about that. How can I be impactful in this person’s life? What is going on with them? And that’s more than just casually meeting you and saying hello. Really getting to know you and understanding what your needs are. And is there a way that God can use me to help?

Lauren, you talk about some basic steps that you and he take, including praying before you even step out of bed and start your morning routine. Can you describe that a little bit and why you take that approach?

Lauren Dungy: It’s important to hear from our Heavenly Father every day and really, for that matter, all day long. But certainly before we begin our morning routine, Tony and I do spend time before the Heavenly Father, and we pray together. We pray for each other, for our family, our household and for what God might be calling us to do that very day. And we need him to direct our path. It’s a daily practice that we do, and every now and then we’ll miss that. And, I’ll tell you, our day is just a little off. We feel that something is missing, or maybe we’re second-guessing some decisions. And it’s because we didn’t take the five or 10 minutes to talk to God.

Tony, you write about teamwork and advising on how to keep diverse people coming together, working together, winning. How do you view the ways the NFL has handled itself in light of the allegations and findings related to sexual misconduct by people both in the ranks of players and owners?

TD: Well, I don’t think we’ve done a great job. We have a very, very high standard, and we should have a high standard. I always talked about that with my players when I coached. We have young people looking at us to set the tone, and they’re going to do what we do. So I think it’s really important that we be above reproach, and obviously you can’t have everybody at that level. But I think we do need to deal with those who fall under the bar, whether it’s players or owners or management or front office, and I don’t think we’ve done a good job of that, so that’s someplace we can improve.

There also have been a range of issues related to race in the NFL in recent years, from controversies about taking a knee during the national anthem to concerns about racial discrimination in hiring in upper ranks of the league and also denial of payments to retired Black players who had dementia. Do you think these times are more tense and difficult than when you became the first African American coach to win a Super Bowl in 2007?

TD: No, I think we just hear about it more. The thing you mentioned with the retired players and the testing, that’s been going on for years and years, and I was a player and I didn’t even know about it. I didn’t know about the baseline they used until this article came out a year or so ago. So I think those issues have been there. I think they’re being brought more to light. 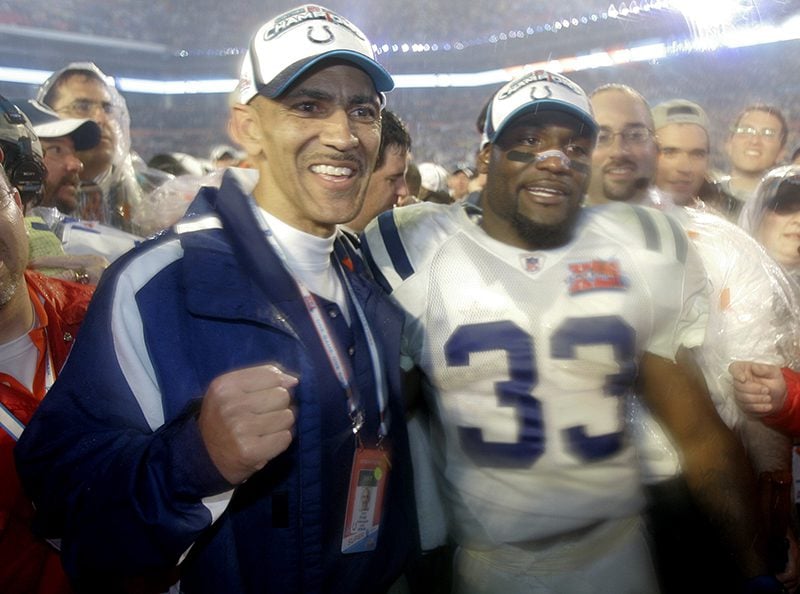 Do you see any better days ahead and for the NFL on race relations?

TD: I do. I do. I think we have people that are concerned about it. The Diversity Committee is meeting and putting together recommendations. Getting people to follow those recommendations is always a different story. But I do think bringing the issues to light has helped.

Lauren, your Dungy Family Foundation has been supportive of crisis pregnancy centers. In light of the Supreme Court decision overturning Roe v. Wade, do you anticipate your foundation is going to take particular steps as more women don’t have access to abortion when they are facing unexpected pregnancies?

LD: We’ve always been proponents for life beginning at conception, and we’re outspoken about that, and we will be there. We are supportive of moms that have made the courageous decision to carry their baby and then place for adoption or seek help so they can raise their child. Our foundation will stand in the gap and help those moms in crisis. We understand there are situations where they have to raise the baby and they don’t have the support of family or their spouse or partner. But we do believe all life is precious, and God does not intend to terminate life for any reason. So our foundation is committed to walking alongside these women in crisis and helping them.

Football players are sometimes known for thanking God when they win, or when they score a touchdown. Tony, you described in adolescence that you were a sore loser. TD: Very much so.

What do you think football players and others, for that matter, should do when they lose a game or something else?

TD: I think the world looks at us in our times of disappointment much more so than they look at us in our times of triumph. If I see someone who wins the Super Bowl and they give credit to God, I’m going to say, well, that’s normal. That’s a natural thing. How is that person going to be when it doesn’t go well? For me, that was always convicting. I have to model my behavior and model my dependence on Christ even when we don’t win. So how are people going to look at me when I get fired? How are they going to look at me when we do lose the game on a bad call at the end of the game? That to me is much more important than how I act when things are going smoothly.

And you still need to be thankful or grateful about the loss?