(RNS) — On Sundays at 8 a.m., the Rev. Melva Sampson dons her bright, chunky glasses and a frayed pink robe as she welcomes attendees by name to worship via Facebook Live. No COVID-19 workaround, Sampson’s ministry has always been online — and for a reason: Its theology isn’t made for Sunday morning walk-ins.

“In this space, while there are many representations of different religious traditions, it is the African Indigenous traditions that hold center,” Sampson told Religion News Service in a recent phone interview.

The weekly services, called The Pink Robe Chronicles, are distinctly womanist and Afrocentric — focusing on the spiritual wisdom of Black women and members of the African diaspora. Sampson refers to the gathering as a “digital hush harbor,” adapting the refuges where 19th-century enslaved Africans would secretly gather, integrating African and Christian rituals.

She began the group unintentionally six years ago, after she had been disinvited to preach at her own church outside of Atlanta, Georgia, and reeling from the death of a Black woman in Baltimore who had been killed by police. Sampson went on Facebook to share brief reflections on lessons inherited from her grandmother. At first it was attended by friends and family, but it grew, and Sampson’s meditations now cover topics such as sacred motherhood or the burdensome myth of the Strong Black Woman and delve into spiritual books by Black women authors — “Red Lip Theology,” by Candice Marie Benbow; “Divining the Self,” by Velma Love; “Making a Way Out of No Way,” by Monica Coleman; and others. Today the meditations are followed by a Zoom discussion called The Clearing, where participants are invited to “talk back” to the chronicle shared. About 50 women normally attend, though in the early days of COVID-19, she could expect some 175.

Sampson, who is a minister in the Progressive National Baptist Convention and assistant professor of preaching and practical theology at Wake Forest University School of Divinity, said, “It allows women to engage and practice and stand and speak from their own lived experiences, validating them in a way that traditional religious faith has not.” The group’s spirituality is occasionally Christian, but it pushes past the bounds of organized religion.

The Pink Robe Chronicles is just one of several groups that grew during quarantine but have taken on a post-pandemic life. Several groups are populated by women of color, many of them grappling with religious trauma. For them, the digital meeting places provide a spiritual community free from the symbols and hierarchies that some find triggering.

Liberated Together’s online presence took off in May 2020, days after George Floyd’s murder, after public theologian Erna Hackett took to social media on a whim to ask whether any Asian American women were interested in meeting virtually to discuss anti-Blackness. To her shock, about 100 people said yes.

“In lockdown, we were desperate for connection. Everyone was watching stuff go down with the murder of George Floyd and all this anti-Asian hate. So that’s when I started experimenting — maybe this could be a thing?”

Soon, Hackett was turning people away, having filled up virtual rooms with non-Black Latinas working on anti-Black bias, 20-something women of color leaders or those wanting to “decolonize with badass Indigenous grandmas.”

Liberated Together charges from $450 to $1,800 per “cohort,” depending on the number of meetings and whether an in-person retreat is included. (Scholarships, Hackett said, are available.) The cost, she explained, ensures that the group leaders are fairly compensated. 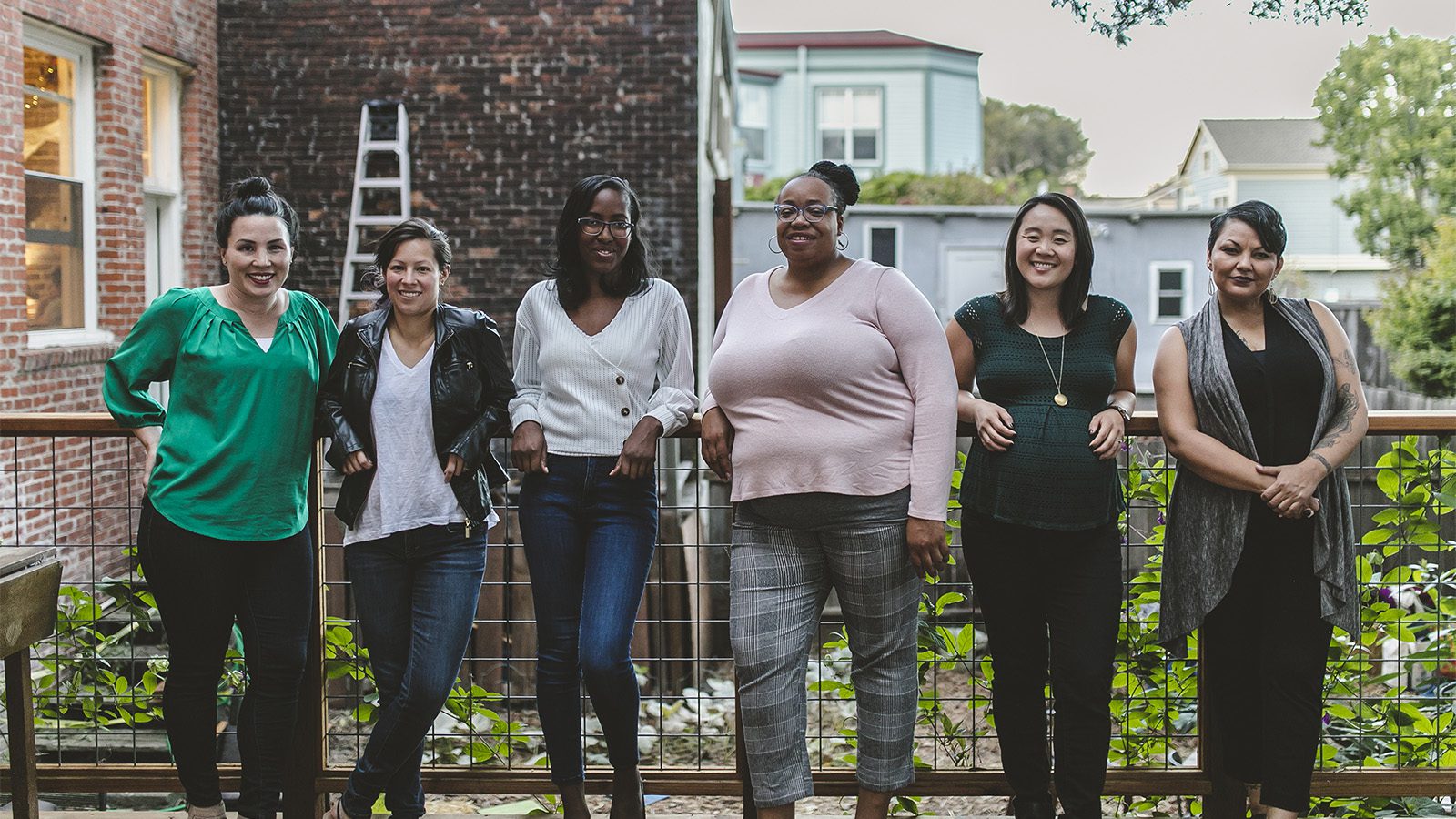 Members of the Liberated Together team. Photo by Kayleigh Shawn

The Liberated Together website makes clear that some debates are off-limits, including whether women can be spiritual leaders, whether queer women should be fully included or if trans women are women, and if patriarchy and white supremacy are real.

“I’m not trying to be for everybody. I’m not trying to be a big tent,” said Hackett. “For many of the women, when the Zoom opens up and they know everybody there has agreed to be not just tolerant, but actively co-creating a space that centers liberated queerness and queer theology, it starts the conversation in wildly different spaces.”

That proved to be true for the Rev. Riana Shaw Robinson, a pastor in Oakland, California, who attended Liberated Together’s cohort for women of color over 30. She said one of the biggest gifts was simply being heard and believed.

“My years in seminary, in the ordination process and serving at a multiethnic church wore me down to a very sad and burnt-out place,” said Shaw Robinson. “And it was women of color who put me back together, who listened me back into life and invited me back into joy.”

RELATED: The ‘Nap Bishop’ offers rest as a tool of resistance

Some women who participated in Liberated Together’s cohorts saw the need for another group, in which they could start to imagine the spiritual spaces they wanted to be part of long-term. Hackett teamed up with three others in late 2021 to launch QUNI, a network for disabled people, queer people of color and women of color. QUNI — a made-up word that allows others to decide what it means — has a podcast and an Instagram account and has offered a series of virtual listening sessions and gatherings. Erica Ramos-Thompson, a master’s degree student at Gonzaga University in Spokane, Washington, who is now a QUNI facilitator, attended one of the first listening sessions for disabled people of color.

“Being surrounded with people that have more than one intersectional identity point overlap with me, I was like, I can breathe. I’m not holding my breath, and I’m not preparing to explain or justify myself in this space,” said Ramos-Thompson. “I felt like I needed to take shoes off, it felt that holy and sacred to me.”

This fall, QUNI will launch networks for spiritual directors and church planters. One of the women who hopes to “birth” a church, as she puts it, is Shaw Robinson, who says her church will start off with an online Advent series later this year. She says the church will initially only be open to women of color, who will set the cultural foundation before it opens up to others. Eventually, she hopes the church will also have an in-person component.

Sampson is also looking to expand the Pink Robe Chronicles’ in-person ministry. The group has given rise to a traveling event series called the 1Love Festival, and Sampson already visits community members with health problems and has officiated weddings for folks who got to know her online.

The group has also used its networks to raise more than $20,000 to support Black women-led households during the pandemic and offers scholarships for Black women attending historically Black colleges and universities.

“Just because I am not tied to a brick and mortar church does not mean I am out of touch and does not mean that I am not called,” said Sampson. “It means I have been called alongside others to usher in something new.”

RELATED: New documentary ‘Daughters of Eve’ imagines a Bible, and world, with women at the center

This story has been updated to show that Sampson’s former church was located outside of Atlanta, Georgia. A previous version said it was in Winston-Salem, North Carolina.