(RNS) – Each week Religion News Service presents a gallery of photos of religious expression around the world. This week’s photo gallery includes Hindu Durga festivals, followers of Maria Lionza in Venezuela and more. 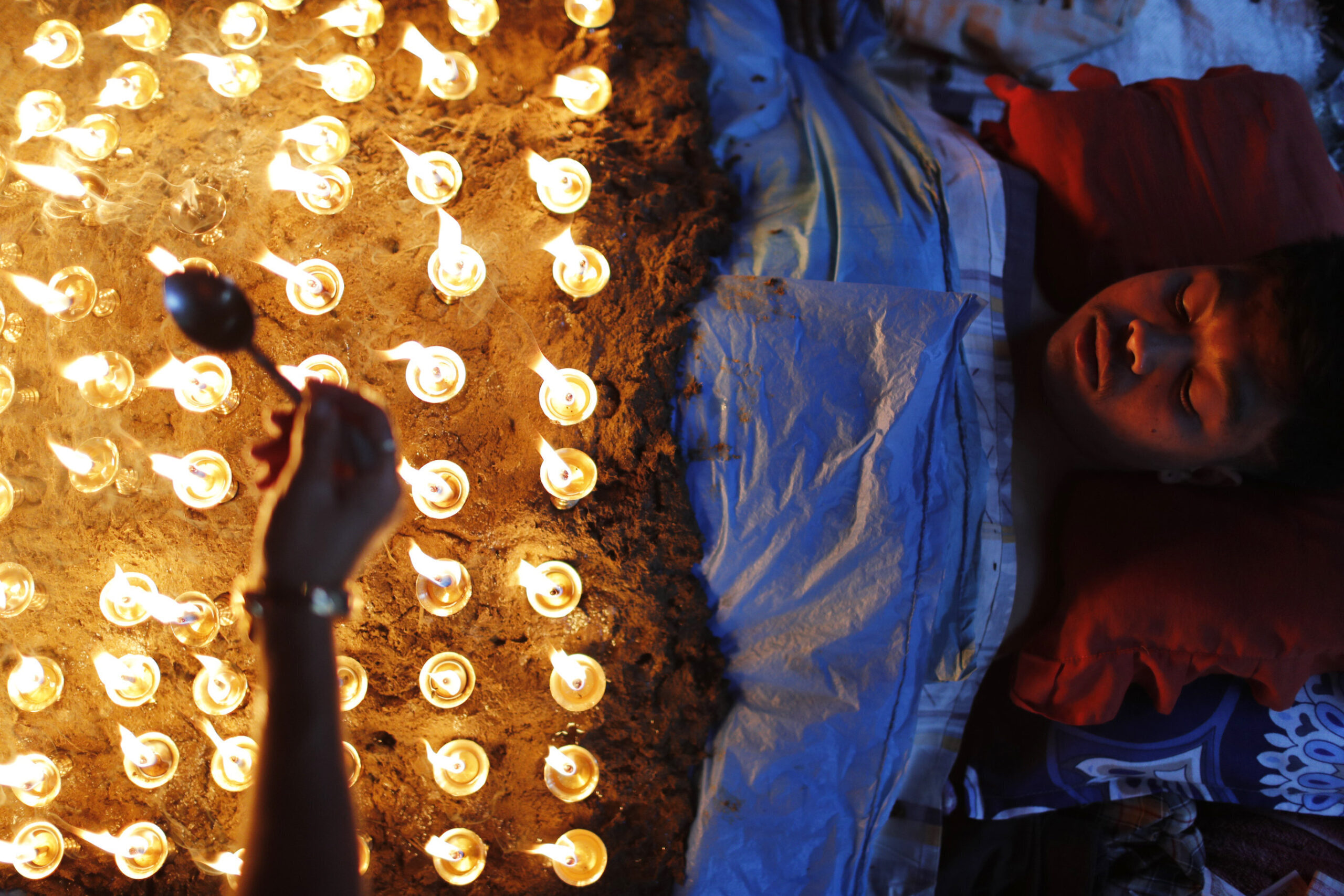 A man lies still as devotees light oil lamps over his body as part of rituals to celebrate the tenth and final day of Dashain festival in Bhaktapur, Nepal, Friday, Oct. 15, 2021. The festival, known by different names in different parts of the world, commemorates the slaying of a demon king by Hindu goddess Durga, marking the victory of good over evil. (AP Photo/Niranjan Shrestha) A priest offers prayers to Hindu goddess Durga inside a “pandal,” a temporary structure set up to worship, during the Durga Puja festival in Kolkata, India, Thursday, Oct. 14, 2021. The festival commemorates the slaying of a demon king by goddess Durga, marking the triumph of good over evil. (AP Photo/Bikas Das) Men of the Barot community dress up as women as part of a tradition to celebrate the eighth night of Navratri, the Hindu festival of nine nights, and perform Garba, the folk dance of Gujarat state, in Ahmedabad, India, Thursday, Oct. 14, 2021. The men perform the dance in the belief that it will free their community from a curse. (AP Photo/Ajit Solanki) 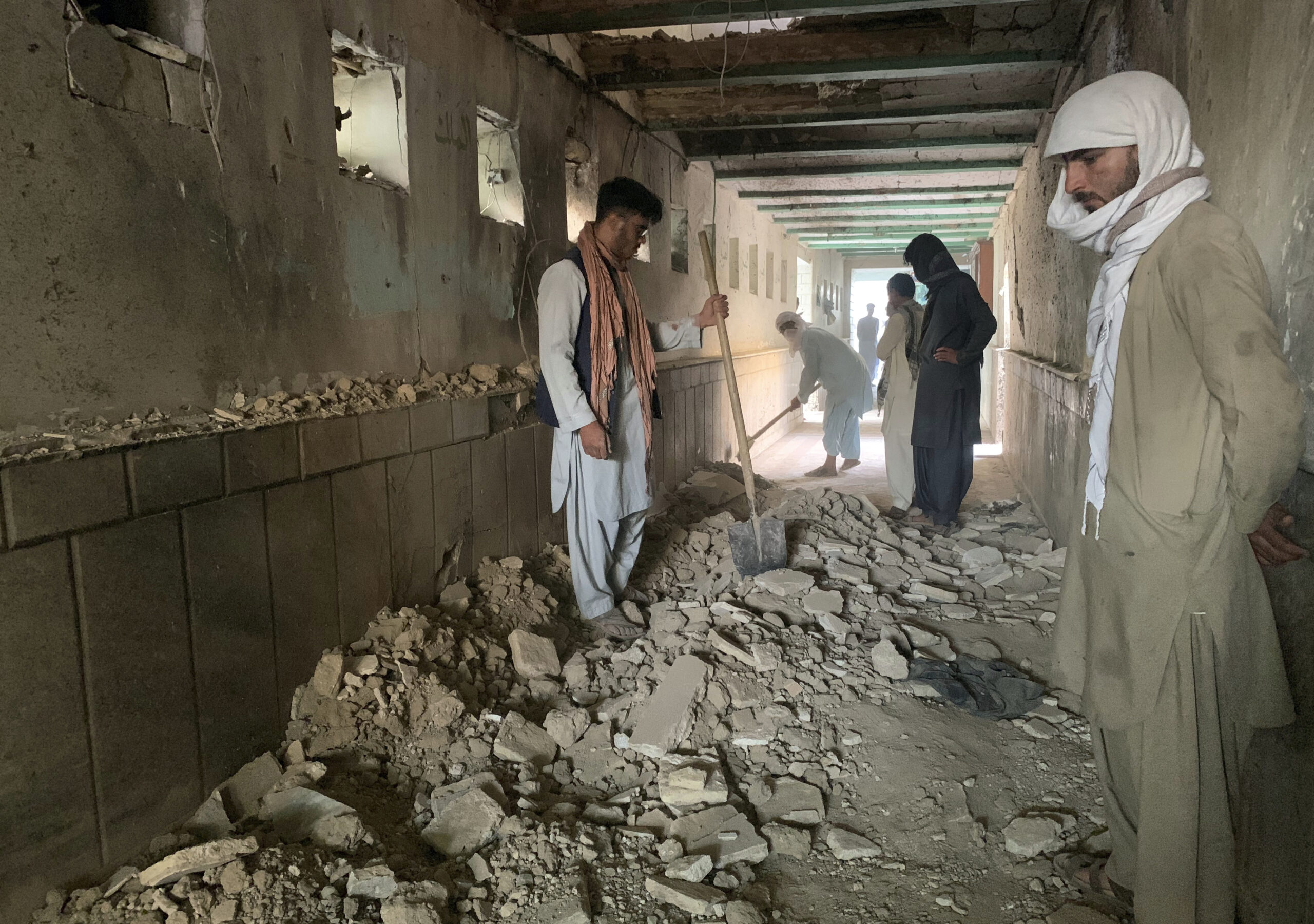 The clean up begins inside a mosque following a suicide bomb attack in the city of Kandahar, southwest Afghanistan, Friday, Oct. 15, 2021. Suicide bombers attacked a Shiite mosque in southern Afghanistan that was packed with worshippers attending Friday prayers, killing several people and wounding others, according to a hospital official and a witness. (AP Photo/Sidiqullah Khan) 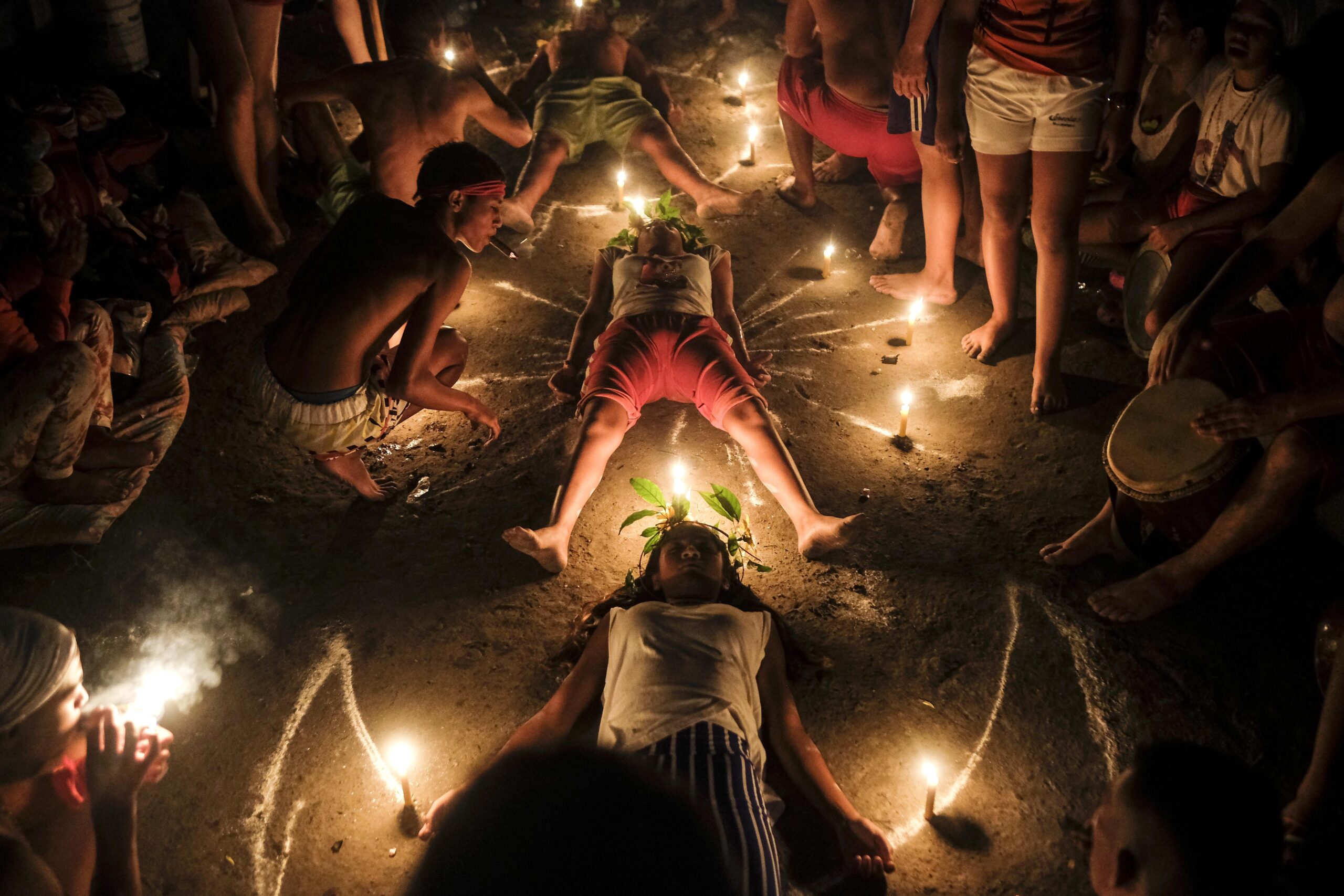 Followers of the Maria Lionza cult perform a ritual at Sorte Mountain in Venezuela’s Yaracuy state, early Tuesday, Oct. 12, 2021, one year after the annual pilgrimage was cancelled due to COVID-19 restrictions. Along with Santeria, Venezuela is home to other folk religions, such as the sect surrounding the Indian goddess Maria Lionza, an indigenous woman who according to tradition was born on Sorte Mountain and whose cult has spread to Colombia, Panama, Puerto Rico, Dominican Republic, and Central America. (AP Photo/Matias Delacroix) 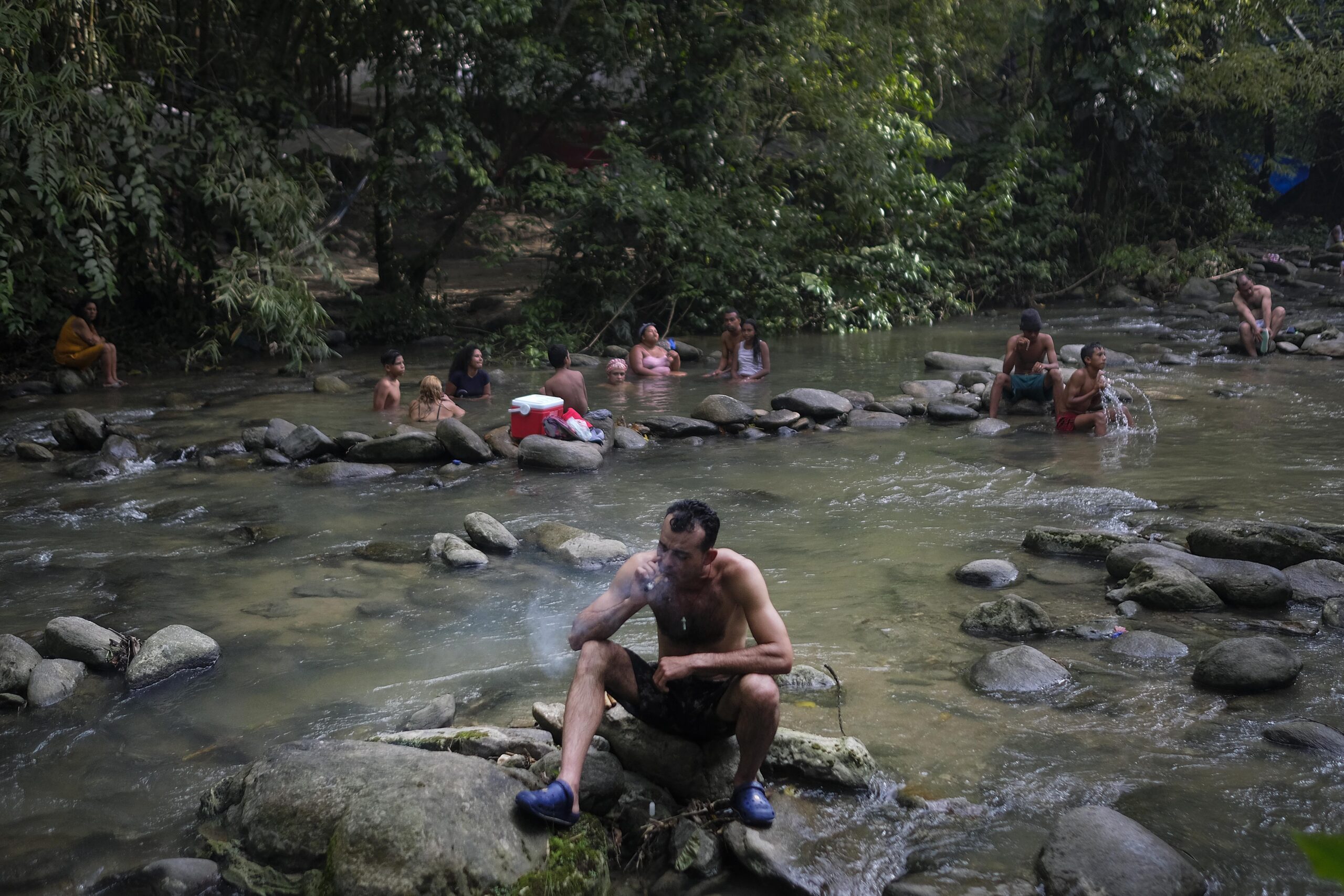 A follower of Maria Lionza’s cult smokes tobacco in a river at Sorte Mountain in Venezuela’s Yaracuy state, Monday, Oct. 11, 2021. Believers congregated for rituals on the remote mountainside where adherents make an annual pilgrimage to pay homage to the goddess, seeking spiritual connection and physical healing. (AP Photo/Matias Delacroix) 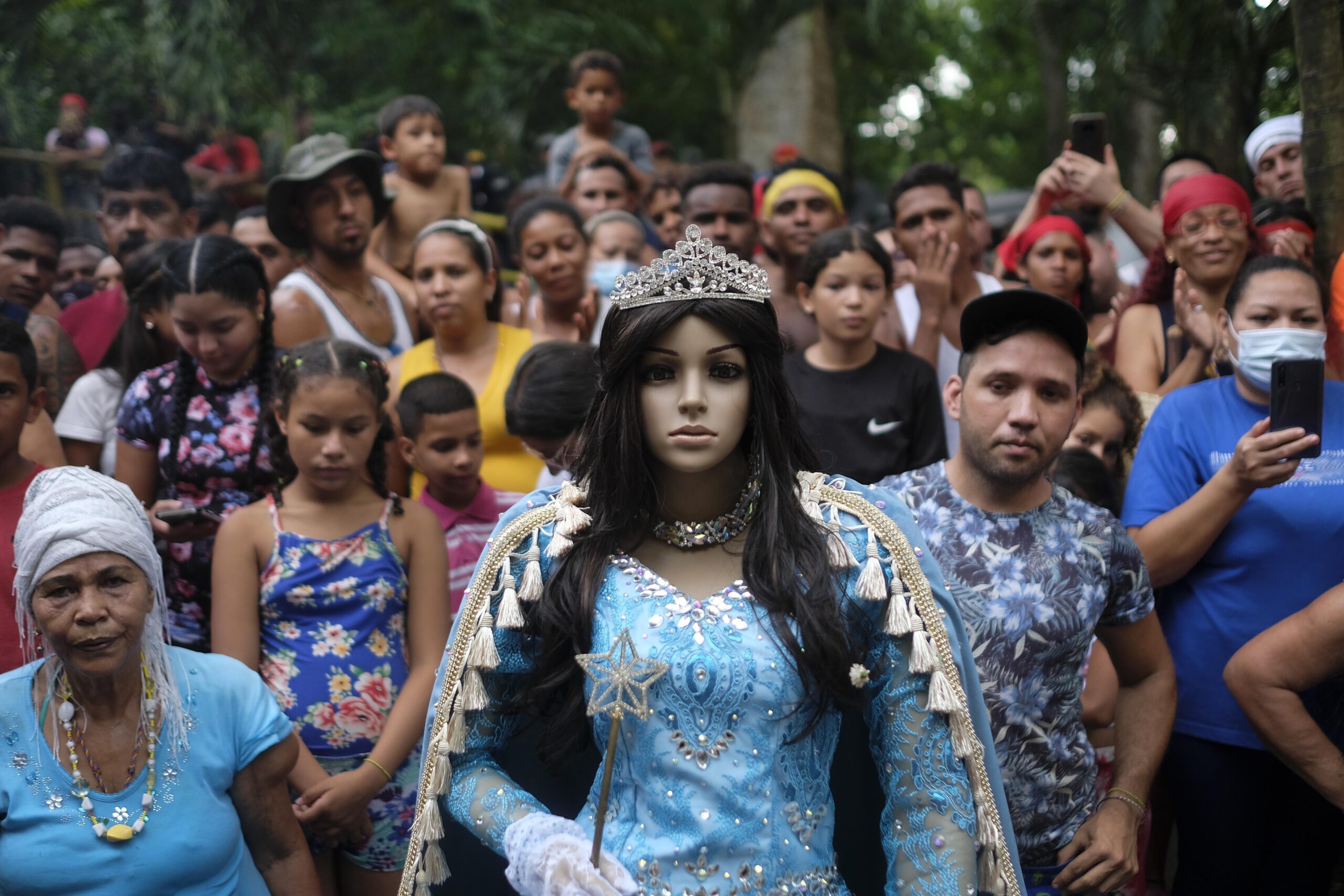 A statue of Maria Lionza stands in front of followers of her cult during their annual gathering at Sorte Mountain in Venezuela’s Yaracuy state, Monday, Oct. 11, 2021. (AP Photo/Matias Delacroix) 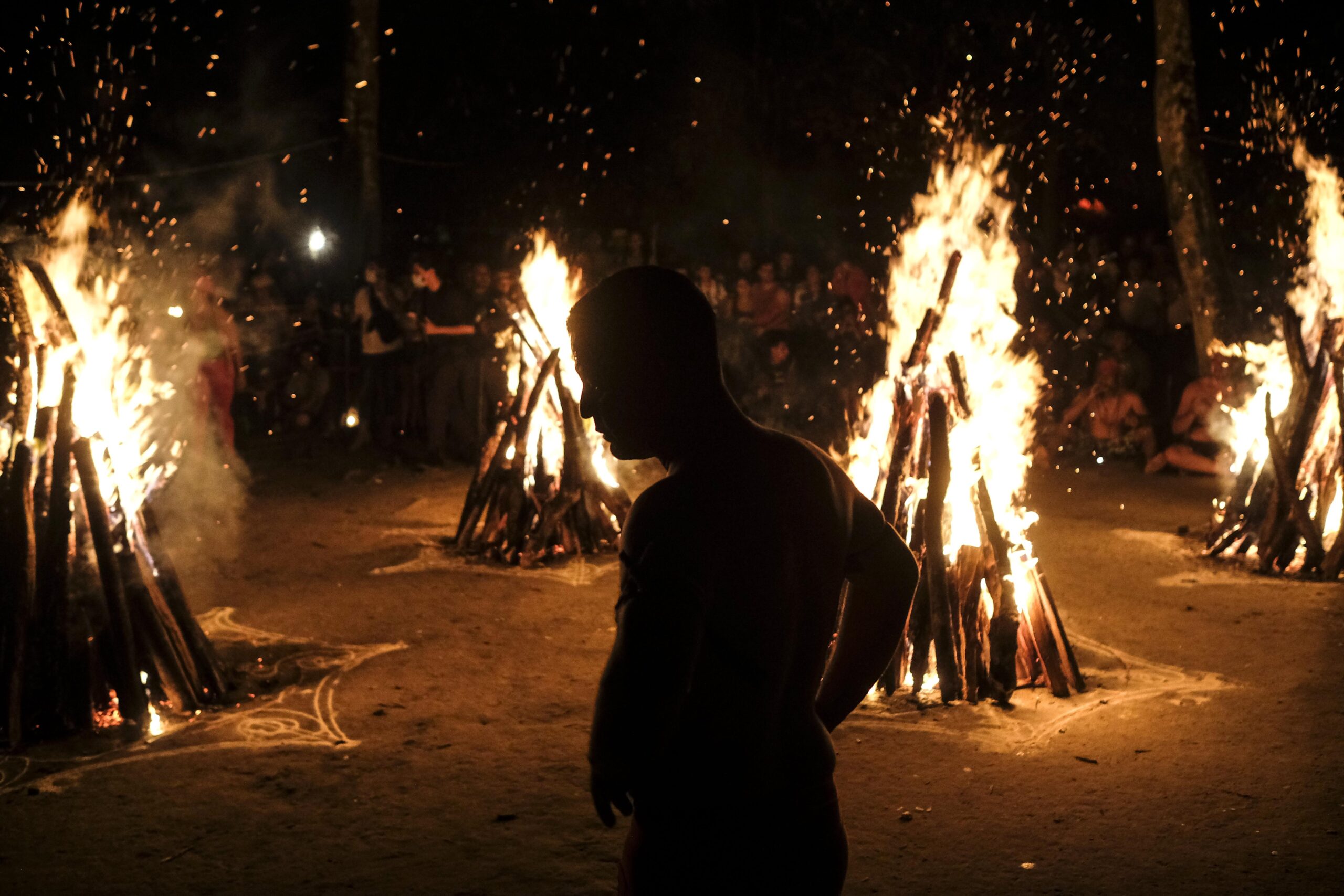 A follower of Maria Lionza’s cult prepares for the flame dance at Sorte Mountain in Venezuela’s Yaracuy state, Monday, Oct. 11, 2021, one year after the annual pilgrimage was cancelled due to COVID-19 restrictions. Those immersed in the tradition say it puts them in a trance that allows them to channel spirits and escape injury from otherwise dangerous feats. (AP Photo/Matias Delacroix) Muslims shout slogans during a protest over an alleged insult to Islam, outside the country’s main Baitul Mukarram Mosque, in Dhaka, Bangladesh, Friday, Oct. 15, 2021. Friday’s chaos in Dhaka followed reported incidents of vandalism of Hindu temples in parts of the Muslim-majority Bangladesh after photographs of a copy of the Holy book Quran at the feet of of a Hindu Goddess went viral on social media in a temple at Cumilla district in eastern Bangladesh. (AP Photo/Mahmud Hossain Opu) 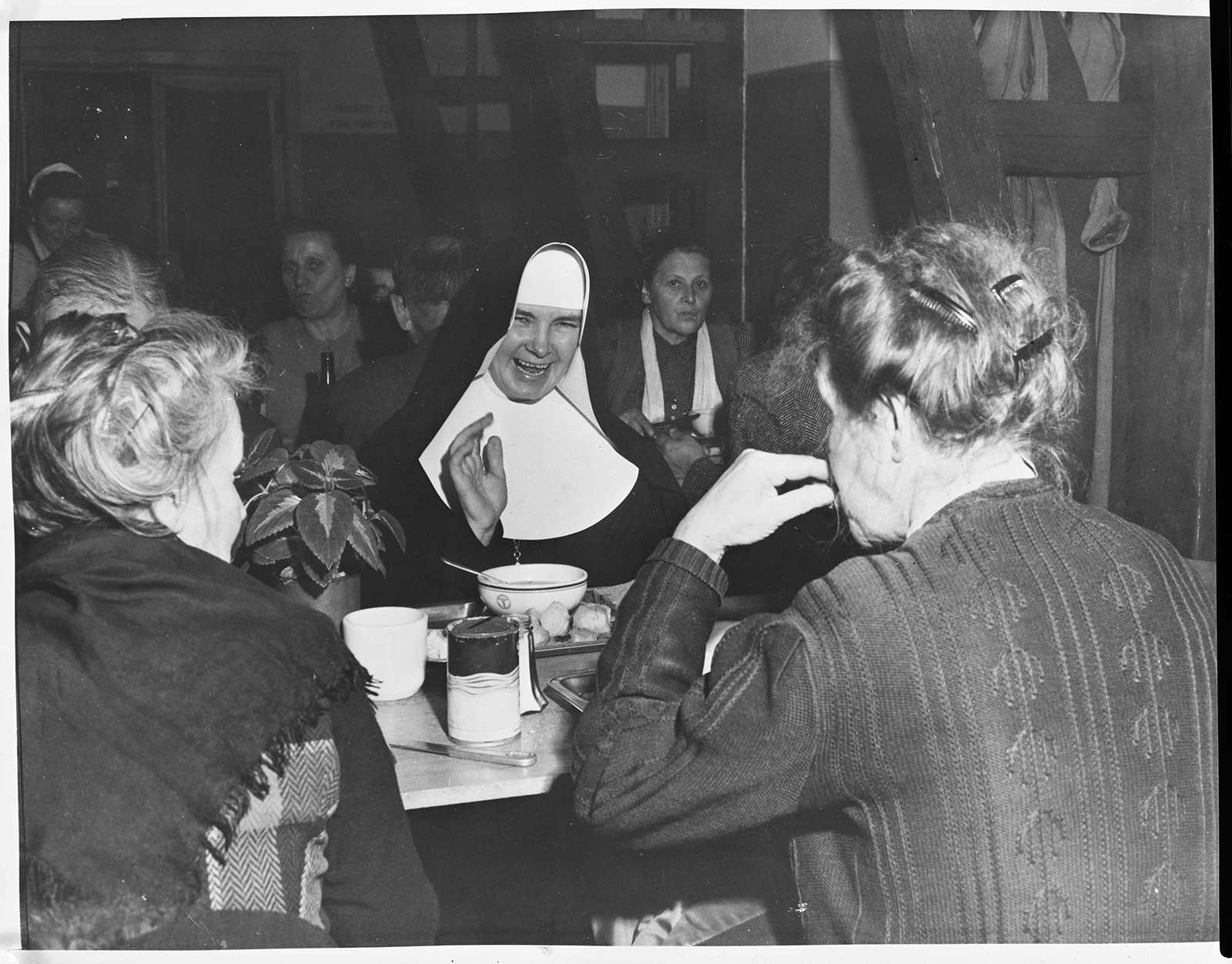 Displaced persons from Eastern Europe have a meal before boarding the U.S. Army transport General William M. Black, the first displaced persons ship bound for the U.S., at Bremerhaven, Germany, in Oct. 1948. At left are Orthodox Jews, whose dietary laws are strictly observed — a “kosher” sign marks their table. A Catholic nun, center, happy to be leaving Germany for the freedom of the United States, shyly laughs and eats. RNS archive photo by Allyn Baum. Photo courtesy of the Presbyterian Historical Society. 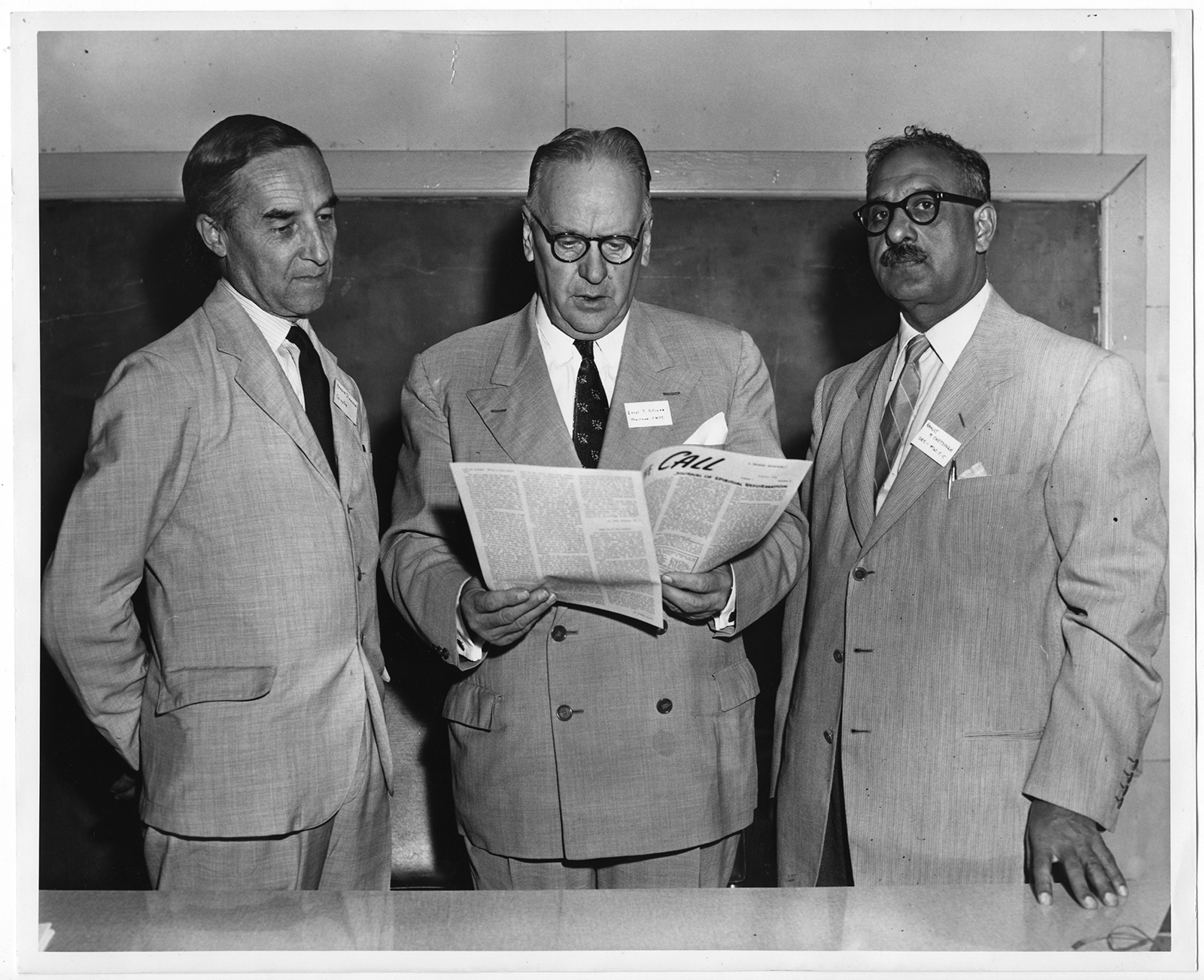