The New York Times bestselling author talk about overcoming her struggle with cutting and how brokenness can be used to hurt or heal.

Outside Paris, a clinic aims to tackle an age-old practice

ST.-DENIS, France (RNS) A mother, cut as a child, seeks help to make sure her own daughter doesn’t suffer the same fate. 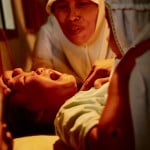 (RNS) Because of its severity and prevalence, female genital mutilation is arguably one of the most important human rights issues in the world. But the practice remains poorly understood, both by supporters who assert it is mandated by Islam, and opponents who, according to some activists, do more to sustain the practice than end it. By Omar Sacirbey.