MOSCOW, Idaho (RNS) — For many local residents, this town is just about perfect.

Surrounded by the rolling Palouse hills, the city of 25,000 is home to the University of Idaho and trendy coffee shops and restaurants like One World Cafe, Bucers Coffeehouse Pub and the gastropub Tapped.

In 2018, Moscow, nicknamed “heart of the arts,” was named by Livability as the best city in the U.S. to raise a family. It’s a place where progressive residents and local entrepreneurs get along just fine, said Ryan Rounds, a resident and veteran and a former University of Idaho student.

“Moscow is an amazing city that tries to strike a balance between the ‘hippie’ population and the business/development-oriented population,” he said.

The city also stands out for its residents’ unusual take on God and politics.

Most Idahoans are evangelicals, according to Pew Research Center, and most vote Republican. 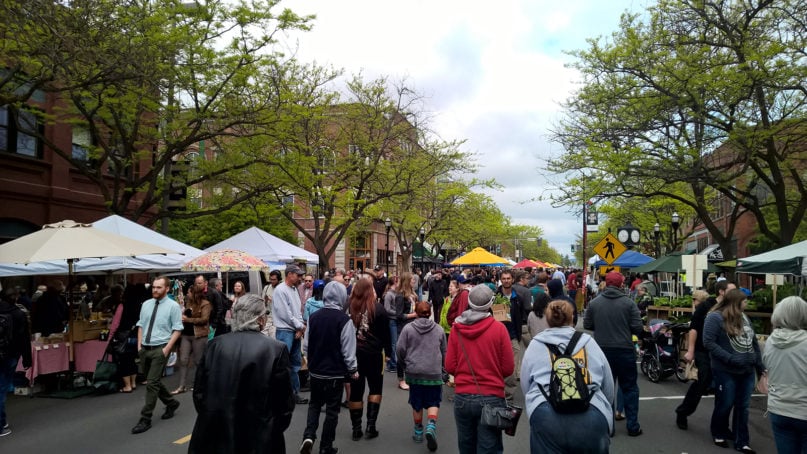 People amble through a farmers market in Moscow, Idaho, in 2015. Photo by Jeremy Segrott/Creative Commons

In Moscow and the surrounding county, however, about half the population voted for Hillary Clinton in the last election. And while the city has plenty of churches, including four Church of Jesus Christ of Latter-day Saint meetinghouses, only 30 percent of Moscow identifies as ‘religious,’ according to an analysis from Best Places.

One congregation is hoping that will change — an ambition that’s been a source of tension for years.

Led by controversial pastor Douglas Wilson, Christ Church of Moscow has for years been planning a spiritual takeover of the town — transforming both its politics and its soul. Wilson is gentle and soft-spoken when not behind the pulpit but will go head-to-head with anyone in a debate.

And he does not mince words about his views on Moscow.

“Basically this is a blue dot in a very, very red state and the blue dotters are pleased,” Wilson told Religion News Service in an interview. “Our mission is ‘All of Christ for all of life’ and if you drill that down, then for all of Moscow.”

“Our desire is to make Moscow a Christian town,” it reads, “ … through genuine cultural engagement that provides Christian leadership in the arts, in business, in education, in politics, and in literature.”

Not everyone in the community is on board with that plan, Wilson admits. He also told RNS the idea of a spiritual takeover of Moscow started with his father, James, who came to the area after retiring from the Navy to start a Christian bookstore at the nearby Washington State University campus. Jim Wilson is now in his 90s and is being cared for by Douglas Wilson and his wife, Nancy. 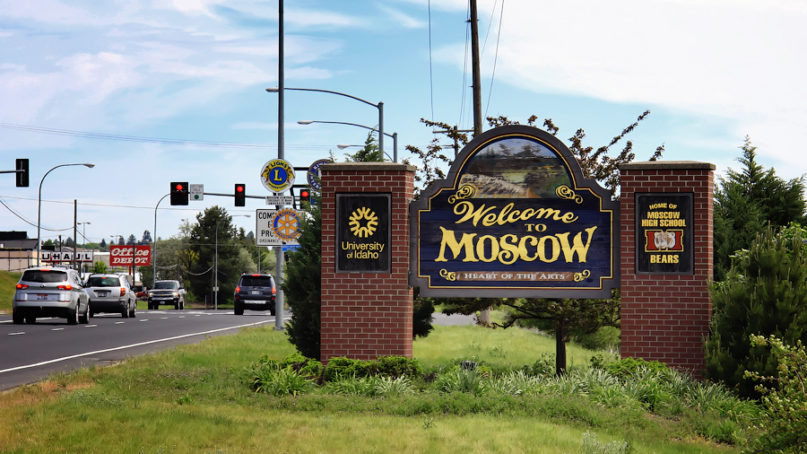 In his 1964 book, “Principles of War: A Handbook on Strategic Evangelism,” Jim Wilson explains that the concepts of physical warfare can be applied to strategic evangelism.

According to his dad’s text, Douglas Wilson said, a takeover of Moscow is feasible because of the city’s relatively small size and its reputation. And a takeover is strategic because it would mean a significant loss to the enemy.

“We could have Bovill for Jesus in two weeks,” Wilson joked, “but that wouldn’t be strategic.”

Bovill is a nearby town with only 260 residents.

Instead, the Wilson family set its sights on Moscow, where the plan remains controversial.

The Wilsons are revered by the 1,300 people affiliated with Christ Church and loathed by many others — in both cases because of their conservative, Reformed evangelical biblical teachings. Christ Church preaches that procreation is an essential part of marriage. The Wilsons have three grown children and 17 grandchildren. The entire family dines together weekly for Sabbath Dinner. 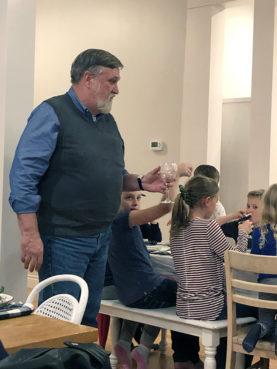 Douglas Wilson with his grandchildren during Sabbath Dinner in Moscow, Idaho. RNS photo by Tracy Simmons

They also believe that homosexuality is a sin and that wives should submit to their husbands.

Wilson promotes the church’s beliefs in a direct, take-no-prisoners approach to preaching and writing. That approach is highlighted in a recent video featuring Wilson sitting on a burning couch and smoking a cigar while talking about his newest series of blog posts.

In the posts, Wilson says he plans to speak the “unvarnished truth” and “to see how the general public likes them apples.”

“It’s not the job of the preacher to be a firefighter out in the world — we’re not supposed to be running around putting out other people’s fire,” Wilson says in the video. “We are supposed to be arsonists.”

“Moscow, a university town with a diverse population, should be a welcoming community for all faiths and beliefs. Christ Church’s goal promotes division and excludes our many friends of whatever faiths including Jewish, Muslim, atheists or anyone besides Christians, as defined by Christ Church. Moscow should not be defined by any religion and certainly not owned nor controlled by any church,” wrote Moscow resident Linda Pike in a recent letter to the editor in Moscow-Pullman Daily News.

Wilson’s past behavior has also given locals reason for concern. In 2001, he presided over the wedding of a convicted pedophile, a decision he still defends.

“He had repented,” Wilson told RNS.

After Wilson counseled and vouched for the suspect, Steven Sitler, Sitler was released on probation, married a young Christ Church member, became a father and was later removed from his home for violating probation.

Despite Sitler’s status as a convicted sex offender, Wilson told church members he was “very welcome” at the church’s services, just like any other sinner.

Wilson also organized a conference about Southern slavery in 2004. The event was held on the University of Idaho campus in response to a pamphlet Wilson wrote titled “Southern Slavery: As It Was,” which argued that slavery created “a genuine affection between the races that we believe we can say has never existed in any nation before the War or since.”

“It was a history conference that people said was a pro-slavery conference,” Douglas Wilson said.

Despite the controversies, the church continues to grow. Nancy Wilson said it’s part of God’s plan.“It’s the story God’s writing. We’re surprised,” she said. “It’s been a really good story and every story has tension.”

Wilson and his followers don’t limit themselves to spiritual matters. They also have a prominent role in the local business community and town politics. Members of Christ Church own construction companies, farms and several popular downtown restaurants. Others are CEOs and business leaders around town.

“I would say any tension between the town and the church is one-sided in that the city bends over backwards to try and accommodate the church and school, granting them special use permits for buildings so they don’t stay unoccupied, while trying to maintain a business district,” Rounds said. “The church just gets really upset when they’re told no.” 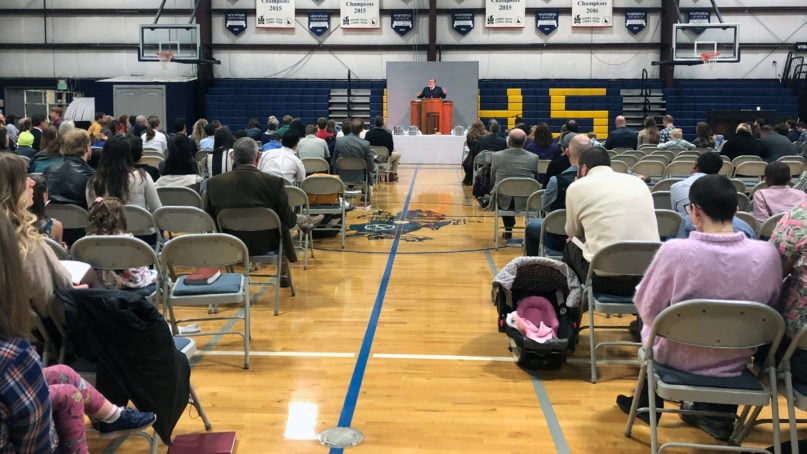 Douglas Wilson, though, says his church’s influence on the town is organic. While Christ Church members operate businesses up and down Main Street, Wilson said that the church has no official role in them. Church members, he said, aren’t following his orders.

Besides, members of the two local congregations that are part of the Communion of Reformed Evangelical Churches — which Wilson was instrumental in forming — make up only about 5% of the town. Christ Church has about 900 members and Trinity Reformed Church, a church plant of Christ Church, has about 400.

Andrew Crapuchettes, a Christ Church elder and CEO of Emsi, an economic development agency in Moscow, recently purchased a historic building downtown, which houses apartments as well as numerous businesses. He said his business endeavors are separate from the church.

“Christ Church has zero governmental authority over my business. My business is owned and controlled by its shareholders,” he said in a statement to RNS.

Nevertheless, apprehension remains. Many residents, like the Rev. Elizabeth Stevens, avoid supporting businesses with ties to the church. Stevens, minister of the Unitarian Universalist Church of the Palouse, said she prefers to patronize businesses that share her values.

“I look for a ‘welcoming and affirming’ decal from PFLAG. I look for products that are ethically sourced, and employers that treat their employees fairly and with dignity,” she said. “How we spend our money is one way we live our values in the world, and I do think we need to be conscientious consumers.”

The Wilsons said they want to support all local businesses, even ones that disagree with their theology. 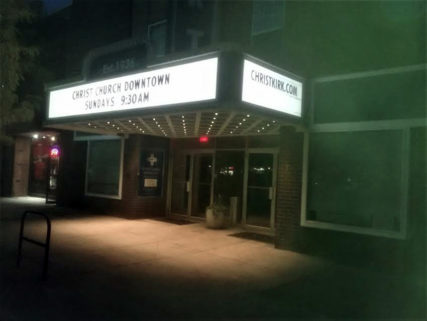 Christ Church has also been in local headlines lately because of New Saint Andrews, a Christian college that the church helped form. Earlier this year, the City Council voted to restrict new colleges and universities downtown and to reject the expansion of existing ones. NSA purchased a second downtown building prior to the vote and will be allowed to continue with plans to convert the building — a former nightclub — into a music conservatory.

“We want to do nice things, good things. Like open a conservatory on Main Street instead of a nightclub,” Douglas Wilson said.

Along with those plans, Christ Church also is building a larger facility on the edge of town for Logos, its K-12 school. That school was founded in 1981 and is part of the Association of Classical Christian Schools, an organization with about 300 members, including NSA, that urges the formation of Christian schools using a model of classical education.

Friction over the growth of NSA has led to tension during the City Council election, in which two people affiliated with Christ Church are running for office: James Urquidez and Kelsey Berends.

Wilson said he learned of their campaigns the same time everyone else did.

“It looks like a power move, but we’re running into people trying for City Council for the same reason you run into them at (the local tire store). They’re just part of the community. People have homes here and buy businesses. It happens. It’s not a directive,” he said.

At a recent candidate forum, Urquidez said, “There’s a big population of Christians in the town that I think need to be represented on City Council.”

His daughter, Pris Urquidez, disagrees. On social media, she has urged residents not to vote for her father – or any candidate from Christ Church. On Facebook she wrote that with the combined might of NSA, Christ Church, Emsi, Logos and Trinity backing her father, it would be dangerous for Moscow.

Stevens, the Unitarian minister, worries that if Wilson’s followers become leaders of the City Council, they might pass policies that discriminate against LGBT residents, given the church’s views on sexuality.

But she is hopeful.

“That said, spiritual battles happen in people’s hearts, and I have a lot of faith that the majority of people in this community support human rights and respect their neighbors’ rights to worship, love and live as they choose.”

Heather Wilson, daughter-in-law of Douglas Wilson, said members of Christ Church are used to people lashing out at it. Recently her son’s pickup was vandalized for having an NSA bumper sticker.

“A lot of it is remanufactured Moscow misconceptions. People have a habit of yelling things out of context,” she said. “We take care of our kids, be good neighbors, but people always have something to say. People are looking to find offense and give offense when really, at the end of the day, we’re just trying to be good neighbors.”

“The parallels of the two are obvious. They have different cultural histories, yet they converge on the sense of ‘We are an intentionally dissident sort of community and we will exert our power in the marketplace, in democratic elections, and then we will, on purpose, take over and make it our place,’” he said.

Douglas Wilson said the divide that’s happening in Moscow is reflected nationally. He said the country seems to be in a “slow-motion civil war with no bullets” because of an uptick of hatred and animosity.

“The only possible solution is a massive religious revival,” he said. “Short of that and we’re headed for trouble.”