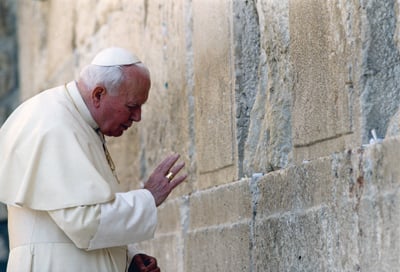 (RNS4-MAY12) John Paul II places a prayer expressing remorse for past treatment of Jews in the Western Wall in Jerusalem during a trip to Israel in 2000. The political situation on the ground, and relations with both Muslims and Jews, have changed dramatically since. Religion News Service file photo.

(RNS1-MAY12) Pope John Paul II, shown here looking out over the Holy Land at Mount Nebo,
became the first pope in 2,000 years to officially visit the state of Israel. The photo is part of the
exhibit ``A Blessing to One Another: Pope John Paul II and the Jewish People,'' opening at Xavier
University in Cincinnati on May 18, which would have been the pontiff's 85th birthday. See RNS-
JOHNPAUL-EXHIBITS, transmitted May 12, 2005. Photo courtesy John Paul II Cultural Center