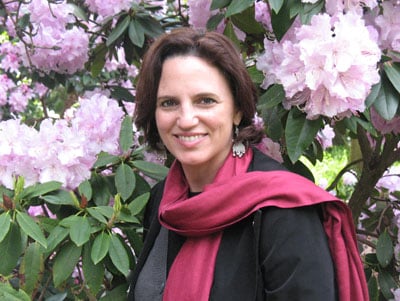 (RNS6-JUL12) Laila Al-Marayati, a spokeswoman for the Los Angeles-based Muslim Women’s League, says Muslim men often ignore the Quran’s guidance to “lower their gaze” while chastising women for not covering their heads. For use with RNS-LOWER-GAZE, transmitted July 12, 2010. RNS photo courtesy Laila Al-Marayati.

(RNS) It was a moment Laila Al-Marayati wishes she had back.

Standing outside the Islamic Center of Southern California in Los Angeles following Friday prayers, a male worshipper approached and chastised her for not wearing a headscarf.

“If you were a true Muslim,” he snapped, “you would keep your hair covered.”

Al-Marayati, a spokeswoman for the Los Angeles-based Muslim Women’s League, was taken aback and too shocked to be able voice her anger. Looking back, she wishes she could have given him a piece of her mind.

“And if you were a true Muslim,” she would have told him, “you wouldn’t be staring at me.”

Al-Marayati and other Muslim-Americans say that ogling is one of the biggest yet least-talked about problems in their communities. Among the worst offenders, they say, are self-styled morality police who are quick to reproach women for how they dress, yet ignore the mandate from the Quran to keep their eyes to themselves.

The result is a double standard that not only discriminates against women and is inconsistent with the Quran’s guidance to “lower their gaze and be modest,” critics say, but contributes to the objectification of women that Islam was supposed to eliminate.

“People have stories like this all the time,” she said.

Ogling is also discussed in the hadith, the collected sayings of the Prophet Muhammad. “And the eyes commit adultery. Their adultery is gazing,” according to one saying, while in another, Muhammad states that the first glance is not a sin because it is by accident, but a second glance would be a sin. (One joke among Muslims recommends making the first glance a long one, since it’s not a sin.)

Despite the apparently clear command to both sexes not to ogle and to dress modestly, critics say many mosques ignore male responsibilities while segregating women with barriers or placing them in balconies or separate prayer rooms.

“That’s a point that doesn’t get talked about, and that’s a huge policy issue, because so much time and energy is spent on keeping women behind a curtain, but not much effort is made to make sure men keep their gazes low,” complained Rizwan Kadir, executive director of the Muslim Community Center Full-Time School, an Islamic middle school in Morton Grove, Ill.

Islamic historians say one reason the imbalance persists is because many Muslim communities are rooted in patriarchal societies.

“Throughout the ages, Islam has always been interpreted in terms of patriarchal culture,” said Riffat Hassan, a retired Islamic scholar from the University of Louisville. “This particular text talks to both men and women, but the part that applies to men is disregarded.”

The problem is exacerbated, Al-Marayati said, by religious leaders who know the verse about lowering one’s gaze but tolerate men who chastise women out of fear of being seen as soft on female modesty.

The issue is not completely ignored, however, popping up on websites where Muslims seek advice from religious leaders. In the “Ask the Scholar” section of Islamonline.net, for example, Saudi scholar Muhammad Saleh Al-Munajjid recommends that Muslims struggling to not look at the opposite sex should avoid places where there is temptation, and fast, since hunger diminishes sex drive.

When lowering the gaze is invoked, it is often done too literally, disregarding a person’s intentions or the need to practice self-control, critics said. While some situations merit turning away, Muslim men and women in professional, educational, and social settings should be able to hold a conversation without having lurid thoughts enter their minds.

But rather than stressing self-control, Kadir and others worry, many Islamic figures preach an impractical and unnecessary separation that makes it difficult for Muslim Americans to succeed or function in larger society.

“I’ve seen a lot of young Muslims in work situations who act shy and don’t look their co-workers in the eye when they’re talking with them, because they’ve been taught to lower their gaze,” Kadir said. “We can’t control the society and how people dress. We have to find something within ourselves to practice our religion as it was meant to be practiced, and that something is self-control.”

Hassan, from the University of Louisville, agreed.

“My interpretation is that it means you should not stare or ogle at somebody. It does not mean you have to look at the floor when you talk to someone of the oppose gender,” she said.

While it may remain relatively rare, Hassan said fed-up women are increasingly telling men to keep their eyes to themselves. “It’s moving in the right direction, but it will take a long time before things are equalized,” she said.

For her part, Hassan has invoked the gaze verse. Several years ago at an interfaith meeting in the Midwest, a man told her that she was not a real Muslim because she was not wearing a headscarf.

“And I said, `Neither are you. Not only are you staring at me, but I can see your chest,”‘ Hassan recalled. “The man was so ashamed he almost slid under the table. He wasn’t expecting that.”