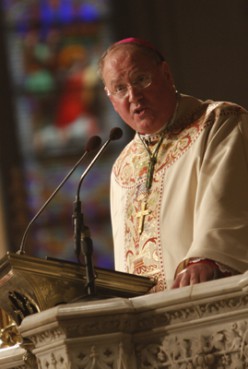 (RNS) Archbishop Timothy M. Dolan of New York, president of the U.S. Conference of Catholic Bishops, is increasingly at odds with the Obama administration over several policies. Religion News Service file photo by Gregory A. Shemitz.

NEW YORK  (RNS) In the wake of President Obama’s controversial decision to mandate that religious groups pay for contraceptives for their employees, much of the coverage focused on how the president had disappointed progressive allies by giving religious groups an extra year to comply.

“I have to say, there’s a sense of personal disappointment,” Dolan said Tuesday (Jan. 24) after he gave a lecture on “Law and the Gospel of Life” at Fordham Law School.

Last November, amid deepening tensions between the bishops and the administration over the pending contraception mandate and other issues, Obama invited Dolan to the Oval Office, where the two men shared what Dolan called a productive and “extraordinarily friendly” meeting.

“The president seemed very earnest, he said he considered the protection of conscience sacred, that he didn’t want anything his administration would do to impede the work of the church that he claimed he held in high regard,” Dolan recalled on Tuesday. “So I did leave a little buoyant.”

That optimism ended last Friday, however, when Obama phoned Dolan to tell him that he was not expanding the conscience exemption to include religious institutions — such as Catholic hospitals, universities and social service agencies. In a bid to appease critics like Dolan, the White House gave church organizations an extra year to find a way to comply with the mandate that all health insurance plans provide free contraceptive coverage.

“I had to share with him that I was terribly let down, disappointed and disturbed, and it seemed the news he had given me was difficult to square with the confidence I had felt in November,” Dolan said.

Dolan indicated that his preference is to keep the lines of communication with the administration open. But Dolan is already facing pressure from other bishops to take a more confrontational stance toward the White House.

Dolan was scheduled to leave Wednesday for a nine-day spiritual pilgrimage to Israel; after a brief return to New York, he will head to Rome where he will be formally elevated to the rank of cardinal by Pope Benedict XVI.