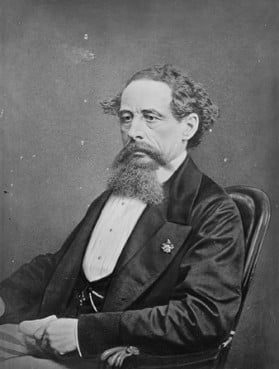 It seems a fitting gesture, given that the Abbey's Poets' Corner houses the famous writer's remains. But it is also ironic in light of Dickens' distaste for religious structures and rigid dogma.

Dickens, a member of the Church of England, believed deeply in Jesus as savior and in his moral teachings, but many of the novelist's most avowedly Christian characters represent the worst in religion: greed, hypocrisy, indifference to human suffering, arrogance, self-righteousness and theological bullying.

“He was more interested in the general spirit than the specific letter of the faith,” said Brian McCuskey, who teaches English at Utah State University. “Holding broad, loose beliefs, he had little patience for either institutional or evangelical Christianity.”

To Dickens, says Barry Weller, a professor of English at the University of Utah who specializes in 19th- and 20th-century British literature, “any sectarian commitment got in the way of essential Christianity.”

It was Christian zealots' attitude toward the poor that bothered Dickens the most.

“What we find again and again in the novels is that (these Christians) want to do charity in a wholesale rather than individual way,” Weller said. “They are not sensitive to the needs of individual families and their situations. Instead of giving them what they need, they hand out a bunch of (religious) pamphlets. When they visit the poor as representatives of religion, they seem more eager to impress (on the needy) a certain doctrine than try to help them.”

So where did Dickens' get his wariness toward Christian institutions?

After a somewhat idyllic childhood, the 12-year-old Charles was sent to work for 12 hours a day, Benson writes, “pasting labels on bottles at a tumbledown, rat-overrun shoe polish factory on the Thames.”

The elder Dickens landed in debtors' prison, where he was joined by his family. The future novelist had to walk three miles a day to the prison from his factory job. Eventually, the family went free, but the young Dickens never forgot the trauma.

“These cruel turns of fate — his humiliating enslavement to menial labor and his father's imprisonment and disgrace — would haunt Dickens for the remainder of his life,” Benson writes. “Abandoned children and orphans like Pip — the hero of 'Great Expectations' — are everywhere in his work, and abandonment of course need not be literal to wound deeply and permanently.”

The experience also gave him an instinctual empathy for the suffering masses and an antipathy for those proclaiming the Christian gospel who failed to care for them.

In Dickens' novels, McCuskey said, many scenes illustrate the churches' institutional neglect of the poor, including a parish's cruel treatment of Oliver in “Oliver Twist” and Jo, the crossing sweeper in “Bleak House” staring up “uncomprehendingly at the cross at the top of St. Paul's Cathedral, which seems very, very far away.”

Many Christian characters symbolize negative values, he said, noting the “gluttonous Rev. Chadband in 'Bleak House,' who spouts platitudes and sweats train oil, or the fanatical Mrs. Clennam in 'Little Dorrit,' who keeps secret from her son the fact that she is not his real mother.”

The first person who taught him to read,” Weller said, “was an Anglican clergyman in Rochester where the family was living.” As a successful writer, Dickens became involved in many charitable causes, including homes for “fallen women” and orphanages, he said.

Dickens connected his intense empathy for children's suffering with Jesus' own receptiveness to the young and innocent, Weller said, and alludes frequently to the Christian savior's example in the New Testament.

The novelist believed strongly in “the moral values of Christianity — self-sacrifice, charity, compassion, forgiveness,” McCuskey said, “and his heroes and heroines embody those values.”

The question that comes up over and over for Dickensian characters is whether there's a possibility of genuine transformation. The clearest exemplar? Ebenezer Scrooge.

In “A Christmas Carol,” Scrooge is visited by ghosts, not angels, but the pilgrimage through his own past, present and possible future has the same effect: He is eager to alter his destiny.

“I am not the man I was,” Scrooge says to the Ghost of Christmas Yet to Come. “I will not be the man I must have been but for this intercourse.”

Dickens' most overtly religious work, “The Life of Our Lord,” emphasizes Christ's “humanity and moral lessons,” McCuskey said, not his divinity. In this small volume, the novelist penned a simplified version of the New Testament for his children, which retells the Gospels' familiar stories and parables.

The book concludes with a plea to “do good, always” and to live, without boasting, the “quiet” Christian qualities of love, gentleness, meekness and humility.

“It outlines his faith,” great-great-grandson Gerald Charles Dickens writes in the introduction, “which was simple and deeply held.”