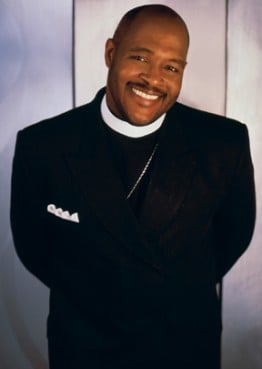 Marvin Winans will give the euology at Whitney Houston’s funeral on Saturday in Newark, N.J.

NEWARK, N.J.(RNS) Marvin Winans is no stranger to fame. He comes from a musical gospel family known far and wide. Just say “the Winans” and people in the music world know who you're talking about.

Marvin was the premier songwriter for the group, their albums top sellers spanning the 1980s and 1990s. Though he's a gospel giant, he has worked in the secular music world as well, fusing gospel and rhythm and blues with big names such as producer Teddy Riley.

But at the end of the day, those in pastoral and gospel circles say Winans is a preacher and a good one who'll lean on the gospel to eulogize Whitney Houston at the New Hope Baptist Church here in Newark on Saturday (Feb 18).

“He knows how to minister at times like this,” said the Rev. Joe Carter, the New Hope pastor who will be officiating. “No preacher has the extreme joy to be put in a position like this. It's one of the challenges to ministers in dark times, but that's where the Word of God comes in.”

Winans, a Grammy Award winner, is pastor of the Perfecting Church in Detroit, which he founded in the early 1990s. When you combine his ability to deliver a sermon and his musical background, he is the common-sense and hands-down choice to celebrate Whitney's life at the church where she grew up singing, mesmerizing people with her talent as young as 12 years old.

Winans had a special bond with the pop star, say those who know him and knew Houston. His family has known the Houstons for years. Both are rooted in the church, and Winans married Whitney and R&B singer Bobby Brown, her ex-husband, in 1992. They have appeared onstage together but, more importantly, Winans knows the triumphs and trials of the musical celebrity that were at the center of her life.

“That's important, because one of the clouds over this whole thing has to do with her struggles,” said the Rev. DeForest B. Soaries Jr., senior pastor of First Baptist Church of Lincoln Gardens in Somerset, N.J. “I think Marvin will be able to handle the task of broadening people's understanding of the pressures of being Whitney Houston. He's had more fame than most preachers. It uniquely qualifies him to help us understand some of these issues.”

Winans' main challenge, however, will be to uplift the family's spirit. Yes, he'll talk about Houston, whom he has described as his sister. And more than likely, he will be moved to sing, a style of ministry that is upbeat, inspiring, bringing another dimension to the service while staying focused on Houston's life and contributions.

Stefanie Minatee, artistic director of Jubilation Inc., a well-known Newark choir, said Winans is one of the most beloved male vocalists in the gospel industry. She said he's very well respected not only for his music, but also as a preacher of the gospel.

Whatever he does from the pulpit won't be planned. “We move by how God directs us,” Minatee said. “He (Winans) is always led by God. God will decide what he'll do so he'll be a comfort for the family. We're praying the Lord will give words of comfort so the family can move on. I'm sure he'll be prayerful that God will give him what to say and what to sing,” she said.

The service will be attended by superstars and celebrities, mega-personalities, legends. It is certain to be a celebration filled with voices the Rev. Jesse Jackson says will make you think of a Scripture often quoted at times like this.

“Weeping may endure for a night, but joy cometh in the morning,” Jackson said. “We rejoice through our pain. Celebration is a form of healing.”

No one knows when that joy will come for the Houstons or for anybody who has lost a mother, a daughter, a sister, a friend. It varies from one family to the next.

“Religion does not help you get over your loss,” Soaries said. “It helps you get through the pain.”

But for Saturday, you just have to trust that Winans will get the family to smile through their tears. And when that happens, you'll understand why they felt he was the best person for this going-home service.

(Barry Carter writes for the Star-Ledger in Newark, N.J.) 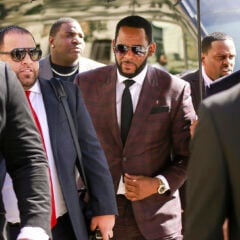 Opinion
Will the Black church continue to sing ‘I Believe I Can Fly’?

Martini Judaism
Does NBC have a Jewish problem?
Follow us on Facebook!
Submit your photos to RNS