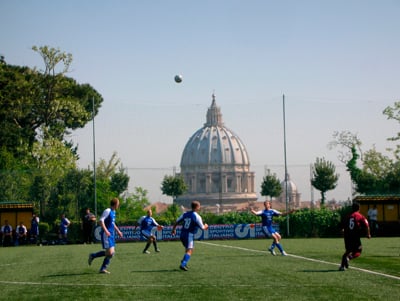 Members of the Pontifical North American College soccer team (in blue) play the Pontifical Gregorian University in Rome in 2007, with St. Peter’s Basilica in the background. The teams
are participants in the Clericus Cup, which lost its Vatican-sponsorship.

VATICAN CITY (RNS) A Vatican department has withdrawn its support from a soccer tournament that pits teams from Rome's seminaries against each other because it has lost its “educational” value.

Sixteen teams from Rome's seminaries and religious orders compete against each other in the Clericus Cup tournament, including the “Martyrs” from the Pontifical North American College, the U.S. seminary in Rome, which placed fourth in 2011.

The Rev. Kevin Lixey, who heads the Church and Sport office at the Pontifical Council for the Laity, said the decision came after the Clericus Cup stopped offering programs to help seminarians reach out to youth and teach them good sportsmanship, which was part of the original intent of the tournament.

“They are just organizing a soccer tournament, and they are doing a good job. But this is not what we are interested in: we want to equip seminarians for their job in the field, to help them reach youth through sport,” he said.

Clericus Cup organizers declined to comment on the matter but stressed that, this year, the tournament had obtained the patronage of another Vatican department, the Pontifical Council for Culture.

The Clericus Cup was launched six years ago, after the Vatican Secretary of State, Cardinal Tarcisio Bertone, said he hoped the Vatican could one day field its own team in international competitions.

Just as Italy's Serie A soccer tournament was embroiled in a match-fixing scandal, the Clericus Cup league stressed fair-play and integrity in its players, with the motto “a different soccer is possible.”

But in 2010, a bitter fight broke out among players during a match. There have also been reports in the Italian press of supporters chanting sharp-tongued songs against rival teams.

Signs of the Times
Dear Pope Francis, six reasons you should wear a mask
News
In wake of financial scandals, Vatican releases budget for first time in four years
News
Pompeo, on impromptu visit to Rome, warns Vatican on China deal
News
Pope Francis accepts resignation of cardinal named in Vatican financial scandals
News
Black Jesus version of Michelangelo’s Pietà divides Catholics on race and politics
© Copyright 2020, Religion News Service. All rights reserved. Use of and/or registration on any portion of this site constitutes acceptance of our User Agreement and Privacy Policy, Privacy Statement and Cookie Notice. The material on this site may not be reproduced, distributed, transmitted, cached or otherwise used, except with the prior written permission of Religion News Service.