(RNS) Stripped of its supernatural elements, does religion have anything to offer atheists? What can nonbelievers borrow from the organizations, practices and rituals of believers — without borrowing a belief in God?

According to Swiss philosopher Alain de Botton, a lot. 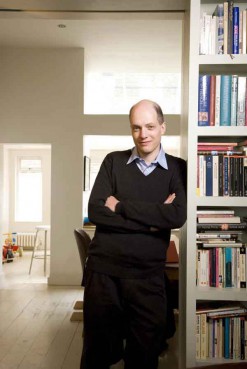 Swiss philosopher Alain de Botton's new book, “Religion for Atheists,” argues that atheists have much to learn from organized religion.

In his new book, “Religion For Atheists: A Non-believer's Guide to the Uses of Religion” he outlines an array of things he contends religions get right and that atheists can adopt to create a better, richer secular society.

“The starting point of all religions is that humans are weak and vulnerable and needing direction,” de Botton said shortly after arriving in the U.S. from his home in England to promote the book.

“But as I look at secular society, I see how we've been abandoned to make our own way through life and how challenging that is.”

Religion, de Botton writes, has a lot to say about how to live and love, caring for others, handling suffering, dealing with death and all the other universal experiences that make us human.

“The error of modern atheism,” he writes, “has been to overlook how many aspects of the faiths remain relevant even after their central tenets have been dismissed.”

For example, to help build a sense of community, he suggests atheists borrow the idea of a weekly, communal meal found at the heart of the Catholic Mass. Atheists could make pilgrimages — not to religious sites, but to places of renewal and meaning, such as a place of great natural beauty or silence or a secular retreat center.

The idea that has attracted the most attention is de Botton's suggestion that atheists build their own temples. He has garnered financial and ideological support for such a site in downtown London. Early architectural drawings show a tower representing the age of the Earth bisected by a thin gold line to mark the time humans have existed.

“It isn't about the worship of reason or atheism or the existence or non-existence of God,” de Botton said. “It is a space where ego is stilled and put into a wider context. It borrows (from religion) the concept that space is an integral part of getting you into the right frame of mind for something.”

The book has received mixed reviews. Writing in The New York Times' Book Review, David Brooks praised some of de Botton's ideas — like his suggestion that museums be organized on universal themes, like compassion — while calling others “silly,” such as de Botton's call for universities to reorganize to include a “Department of Relationships” and a “Center for Self-Knowledge.”

But the harshest criticism has come from within the atheist movement itself. In public and private, fellow atheists have accused de Botton of “betraying” atheism for suggesting religion has value. He was attacked in the British press by Richard Dawkins, best-selling author of “The God Delusion,” and in the blogosphere by P.Z. Myers, an American atheist and biologist.

“I am rolling my eyes so hard that it hurts,” Myers wrote on his blog, Pharyngula. “You may take a moment to retch. I hope you have buckets handy.”

But de Botton said it is not the hard-liners he is trying to reach.

“I am talking to someone who finds themselves not in a position to believe, who has no intuitive sense of the presence of the divine,” he said. “That said, they are relaxed about that, they don't hate religion, they know bad things have gone on about religion, but they don't need to go on about it at every turn. They like the arts, the ethics, the best moments of religion. They are selective.”