(RNS) A small Catholic college in Massachusetts has been pressured by the local bishop into cancelling an invitation to Sen. Ted Kennedy's widow to deliver the school's commencement address because of her support of abortion rights and gay marriage. 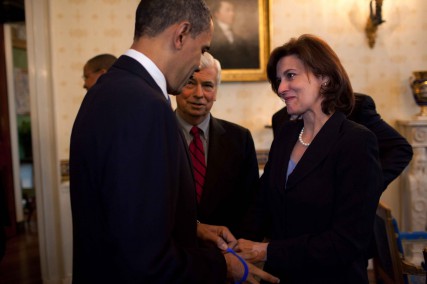 President Obama speaks with Vicki Kennedy, wife of the late Sen. Ted Kennedy, in the Blue Room of the White House prior to signing the health insurance reform bill on March 23, 2010.

Kennedy is a lawyer and founder of Common Sense about Kids and Guns, a nonprofit organization that seeks to reduce gun deaths and violence among children. She has not been notably outspoken on abortion rights and gay rights, though her late husband was a prominent champion of those causes.

Commencement invitations often become a flashpoint in the Catholic Church’s culture wars – the controversy over President Obama’s 2009 address at the University of Notre Dame remains a sensitive subject – and a presidential election year only raises the stakes.

Kennedy, who was to have received an honorary degree in public administration, said in a statement that she was “disheartened” by the cancelation. She said that McManus had not responded to her invitations to discuss the matter, nor had the bishop spoken to her pastor.

“I am a lifelong Catholic and my faith is very important to me. I am not a public official. I hold no public office nor am I a candidate for public office,” Kennedy said. “Yet by objecting to my appearance at Anna Maria College he has made a judgment about my worthiness as a Catholic. This is a sad day for me and an even sadder one for the church I love.”

Kennedy said she understood the pressures faced by officials at Anna Maria College, a liberal arts school of about 1,100 students located in Paxton, Mass.

Anna Maria officials said in a statement to local media that they canceled the invitation after intense debate and with “deep regret.” The executive committee of the college’s Board of Trustees noted that “as a small, Catholic college that relies heavily on the good will of its relationship with the bishop and the larger Catholic community, its options are limited.”

Victoria Kennedy wrote an Op-Ed in The Washington Post in 2004 arguing against denying communion to pro-choice Catholics politicians, a position many bishops accept.

Delisle said unnamed critics of Kennedy supplied McManus with “more local, Massachusetts-scene things where her position has certainly been public.” He did not elaborate on the items or the critics. He said that while Kennedy is not an elected or appointed official who bears responsibility for public policy decisions, “she is a public figure insofar as she certainly holds a position of public prominence.”

In 2010 Kennedy was given an honorary degree by Emmanuel College, a small Catholic liberal arts school in Boston, and there were no objections. “Vicki was a good choice. A great choice,” Sister Janet Eisner, the school’s president, told the Boston Globe. “I find it hard to believe in Massachusetts, in 2012, that this is happening.”

Patrick Whelan, a pediatric specialist at Harvard Medical School who is president of Catholic Democrats, said he had spoken with McManus, and described the bishop as “combative” about denying the invitation to Kennedy.