NEW ORLEANS (RNS) Arriving steadily as singles, or in clumps of twos, threes and fours, thousands of people have streamed in and out of the dimly lighted chapel at Ursuline Academy to sit or kneel and quietly contemplate a phenomenon spreading by social media and word of mouth: a shadow, never noticed before, of a bearded man's face gazing toward the chapel altar.

The shadowy image is projected on the lower half of a sanctuary pillar, with the clear symmetry of a face, a thin beard, and something complicated going on above the forehead. 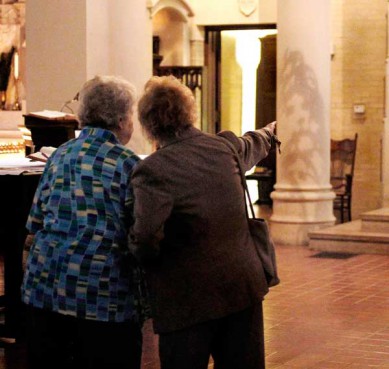 Inez Maxell, left, and Ann Farrelly, came to the Shrine of Our Lady of Prompt Succor at Ursuline Academy to see an unusual image projected on a pillar near the shrine. Many see the image as the face of Jesus bearing a crown of thorns.

In Christianity's solemn week marking the trial and execution of Jesus, people converging on the National Shrine of Our Lady of Prompt Succor interpret the shadow as an image of Jesus bearing a crown of thorns.

The Ursuline nuns have been forced to keep the shrine open far past its usual hours, which they are delighted to do, said Sister Carla Dolce, the head of the small community of five Ursuline nuns. Some visitors come with cameras, hoping for a picture. But most sit or kneel quietly, praying or engaging in whispered analysis of the image on the pillar.

Eight years ago a casino bid $28,000 on eBay for a grilled cheese sandwich bearing the putative image of the Virgin Mary.

In 1999, hundreds of Catholics in nearby LaPlace, La., believed a Communion wafer had visibly transformed into the flesh and blood of Christ until the Archdiocese of New Orleans determined it was mold.

Twelve years ago, 7,000 people visited a small Baptist church in Port Sulphur to view luminous crosses shining on its windows. And 10 years before that, hundreds lined up at two different homes in St. Bernard to see crosses projected on bathroom windows.

The visage at Ursuline seems to be a naturally occurring shadow cast by an ornate chandelier above the sanctuary. But, asked Kim Thompson, who had come to see it, why had no one seemed to report it before? And why this, of all weeks?

“It's got me believing,” she said.

In fact, there are two shadows on two pillars. On one, the man's face. On the other, some see an image of the Virgin Mary, although that takes a more imaginative leap.

Many pilgrims came already knowing part of the back story, confirmed by Dolce: two weeks ago, an Ursuline student in prayer at the shrine had asked for a sign, and shortly thereafter saw the shadow she had never before noticed.

She told the administration, and word leaked out, slowly at first, then more quickly. On Monday, April 2, 2012 more than 2,000 pilgrims have come to the Shrine of Our Lady of Prompt Succor at Ursuline Academy since late last week to see an unusual image projected on a pillar near the shrine. Many see the image as the face of Jesus bearing a crown of thorns. Although it is pretty clearly a shadow cast by an overhead chandelier, it seems to have escaped public notice until now. Miraculous or not, many say the image helps them focus their prayers at the threshold of Holy Week, the most solemn week of the Christian year.

Harolyn Ramsey came to the shrine to see for herself. Like many, Ramsey knew she was looking at a shadow. But shadows come and go, and this one was here, now, attracting dozens of people during the most prayerful week of their year.

“It makes you think more. Pray harder, even if it's just a shadow. It puts me more in mind of Christ's Passion, and that's a good thing at this time of year, shadow or not,” Ramsey said.

Ramsey's goddaughter, Penny Curran, had come with a friend, Trisha Wells, because she wanted Wells, a hard-headed electrical engineer, to see the thing.

Wells was clear: “It's obviously a shadow cast by the scroll work on the chandelier,” she said.”Is it a miracle that a chandelier would cast a shadow in the image of the face of Jesus? Maybe so. But I don't think it's a mystery how it got there.”

Dolce, the superior of the Ursuline community, has an explanation that threads its way between the sacred and the mundane.

“God gives us gifts. Some are natural. Some are supernatural,” she said. “This is a natural gift. It's caused by light filtering through a chandelier.”

“If, when we experience that image, we feel God's unconditional love for us, that's the greatest gift of all,” she said. “When we leave the shrine with that experience the world will be a kinder and gentler place.”