(RNS) Kirk Cameron was once one of Hollywood's babies, the spunky, handsome teenager who starred in the 1980s hit “Growing Pains,” and whose picture was taped inside many a schoolgirl's locker. 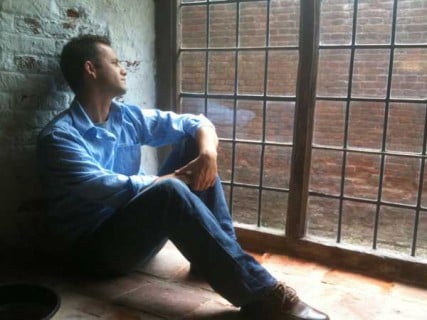 Former TV child star Kirk Cameron knows he is now the darling of only a certain segment of (conservative, evangelical) America.

But now, Hollywood scolds and even mocks Cameron who, at 41, is a vocal evangelical Christian, and, in the view of many of his fellow celebrities, kind of a jerk.

Cameron's more recent acting and directing projects almost always carry a deeply Christian message, and he knows he is now the darling of only a certain segment of America. He even seems to take some pride in the fact.

“I'm kind of a Hollywood freak,” he said in a recent interview. “I didn't really turn out the way most people turn out growing up in this industry.”

Which raises the question: Can an actor be both a pop culture icon and an outspoken Christian?

The latest chapter of Cameron's tense relationship with Hollywood played out as the actor promoted his new documentary, “Monumental,” in which he argues that American civilization will self-destruct if it continues to spurn its Pilgrim forebears' God-inspired blueprint for a righteous society.

“You look at the state of the world that we live in and all signs say 'panic,'” he said.

Talking about the film with CNN's Piers Morgan, Cameron gave his unvarnished opinion when asked about homosexuality. It's “unnatural,” he said on the April 2 show. “I think that it's — it's detrimental, and ultimately destructive to so many of the foundations of civilization.”

The response drew rebukes from gay rights organizations, and ridicule from several Hollywood stars, including an off-color video from a group of fellow former child actors.

As Morgan later summed up the backlash, many people were “shocked by the fact of this sweet nice boy from 'Growing Pains' has come out with what he clearly felt were perfectly normal comments but actually in the cold light of day are transparently offensive.”

“I just don't think you can sit there with a straight face and say 'I'm a Christian, God-fearing, all-around good person, but by the way, I hate these people who were born the way they were.'”

Cameron fans, rushing to his defense from both Christian and secular corners of the Internet, made the point that he never actually said he hated anyone.

To them, he was attacked merely for speaking his and their truth; the very secular forces that Cameron warns of in his movies and ministries had once again proved just how eager they are to silence a believer.

“Finally someone had the courage to speak up for the Word of God,” one viewer posted on Morgan's website. “Thank you, Kirk, you made me proud to be a Christian woman.”

But Cameron's choice of words still sounded mean and backward to many in a country where a slim majority now supports gay marriage.

Hollywood evangelicals work in all parts of the industry, said Patton Dodd, who writes on religion and culture and has worked closely with evangelical pastors Ted Haggard and Rick Warren. But Cameron takes a different approach than most.

“It's kind of like the difference between Peyton Manning and Tim Tebow,” Dodd said. Both are NFL star quarterbacks and believers. “But Manning is quieter about his faith. It's just as fervent and strong by every indication. But he hasn't made it part of his public image and Tebow has _ and Cameron's the same way.”

Well before he appeared on Morgan's show, Cameron had made himself a hero to many conservative Christians, in both his personal and professional life.

At 17 _ still starring in “Growing Pains” _ he was an avowed atheist raised in a family that did not attend church. Then he went to a service with a friend's father, and, as he has attested many times, realized that he was headed to hell.

The Cameron family still lives in Los Angeles, not far from the Hollywood sign. His acting and directing, though, has kept him almost exclusively in the realm of Christian media.

In the past 15 years, Cameron has starred in the “Left Behind” franchise, a series of Christian thrillers based on the end of days. The books have sold 65 million copies, and the movies have fared well within Christian markets.

He also headlined the 2008 drama “Fireproof,” the highest-grossing independent film of 2008, about a firefighter who saves strangers but neglects his wife. Christian critics loved it. Mainstream critics found it preachy.

As he has pursued his Christian film projects, Cameron also founded, in 2002, a radio and television ministry, “The Way of the Master,” with New Zealand preacher Ray Comfort. The two men joined forces to inspire and teach Christians to evangelize, and the shows have further endeared Cameron with committed, traditional Christians.

But the choice to partner with the often brash Comfort also helped define Cameron as the kind of Christian who is bound to find himself marginalized in Tinseltown, said Larry Poland, an evangelical minister whose Los Angeles consulting firm aims to bridge the gap between Christians and mainstream Hollywood.

“I wouldn't have picked Ray Comfort,” said Poland. “Ray Comfort brought to the TV show and to their writing a kind of acidity and an attitude. That didn't help Kirk perpetuate that image of the gracious, reasonable Christian.”

“Monumental,” which Cameron narrates, was released in 500 theaters on March 27. It promotes the gospel of American exceptionalism, rooted in the religious zeal of the Pilgrims who crossed the Atlantic to build a more divinely inspired society than the one they left in England.

Though educators who work on social studies curricula say most American public school children are taught of the Pilgrim's religious motivation, Cameron complains of a nationwide campaign to strip Christianity from U.S. history. He refers to public schools as “government schools,”  and deplores an “all-out assault on the Christian heritage of our country.”

In Plymouth, Mass., he finds the Pilgrims' faith-based blueprint sculpted into a little-known, towering granite monument that was dedicated 123 years ago. Cameron spends a good part of “Monumental” walking around its base with an evangelist, trying to decipher its message.

“Monumental” does not rail against homosexuality or abortion. Cameron asks his audience to help the nation reclaim its godly heritage, but makes few specific demands. Perhaps when the project is nothing short of saving America, it's best to speak as inclusively as possible.

But Cameron, despite his star status with some evangelicals, may never reach the larger, more diverse audience that made “Growing Pains” a prime-time hit. And maybe he doesn't care. But given the monumental goal of his latest big-screen endeavor, it seems as if he does.

“The moral fabric of our nation is unraveling so quickly,” he said. “If we care about our kids and the world that they're living in, we need to change course before the whole thing goes down the toilet in the next 20 or 30 years.”