(RNS) Charles W. Colson, the Watergate felon who became an evangelical icon and born-again advocate for prisoners, died Saturday (April 21) after a brief illness. He was 80.

Despite an early reputation as a cutthroat “hatchet man” for President Richard M. Nixon, Colson later built a legacy of repentance, based on his work with
Prison Fellowship, a ministry he designed to bring Bible study and a Christian message to prison inmates and their families. 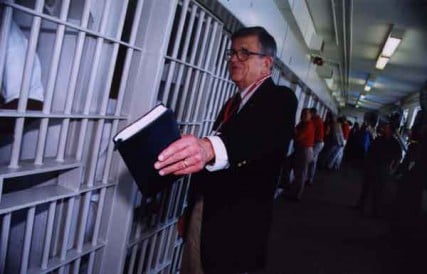 Colson founded the group in 1976 upon release from federal prison on Watergate-related charges. Prison reform and advocating for inmates became his life's work, and his lasting legacy.

Colson had undergone surgery on March 31 to remove a pool of clotted blood on his brain. On Wednesday (April 18), Prison Fellowship Ministries CEO Jim Liske told staff and supporters that Colson would soon be “home with the Lord.”

Due to his illness, for the first time in 34 years, he did not spend Easter Sunday preaching to prisoners, his ministry said.

“For more than 35 years, Chuck Colson, a former prisoner himself, has had a tremendous ministry reaching into prisons and jails with the saving gospel of Jesus Christ,” evangelist Billy Graham said in a statement. “When I get to heaven and see Chuck again, I believe I will also see many, many people there whose lives have been transformed because of the message he shared with them.
He will be greatly missed by many, including me. I count it a privilege to have called him friend.”

In many ways, Colson's life personified the evangelical ethos of a sinner in search of redemption after a dramatic personal encounter with Jesus. He also embodied the evangelical movement's embrace of conservative social issues, although often as a happy warrior.

Today, Prison Fellowship has more than 14,000 volunteers working in more than 1,300 prisons across the country. More than 150,000 prisoners participate in its Bible studies and seminars every year.

The organization founded by Colson also provides post-release pastoring for thousands of ex-convicts, and supplies Christmas gifts to more than 300,000 kids with a locked-up parent through its Angel Tree program.

Colson also founded Justice Fellowship, to develop what he called Bible-based criminal justice, and advocate for prison reform. In 1993, Colson won the $1 million Templeton Prize for Progress in Religion, and donated the money to his ministry.

“We do not exaggerate when we say that this is the greatest threat to religious freedom in our lifetime,” he wrote with George, comparing the mandate to policies of Nazi leader Adolf Hitler.

In 2009, Colson was a chief architect of the “Manhattan Declaration,” which advocated grass-roots resistance to abortion, euthanasia and same-sex marriage. He called the manifesto “one of the most important documents produced by the American church, at least in my lifetime.”

“The Christian's primary concern is bringing people to Christ,” Colson told Christianity Today magazine in 2001. “But then they've got to take their cultural mandate seriously. We are to redeem the fallen structures of society.”

Colson also was a key figure in Evangelicals and Catholics Together, a network of religious leaders who found common ground supporting a ”culture of life” and reaffirmed their stance in 2006 when they called abortion “murder.” 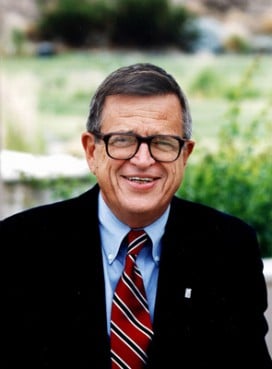 Religion was far from Colson's mind during his early adult life, when his main passion was politics. A Boston native, Colson showed early signs of political acumen as a star debater in high school.

After graduating from Brown University, Colson enlisted in the Marines and rose to the rank of captain. Following law school and a stint in the Pentagon, Colson worked on Capitol Hill as a top aide to Sen. Leverett Saltonstall, R-Mass.

After serving on Nixon's 1968 election team, Colson was appointed by the newly elected president as special counsel to the president. During Nixon's first term, he was known as Nixon's feared but respected “hatchet man.”

Colson once bragged of a willingness to “walk over my grandmother if necessary to assure the President's reelection,” and was roundly known within the Nixon administration as the “evil genius.”

Nixon himself described Colson as one of his most loyal aides. “When I complained to Colson I felt confident that something would be done, and I was rarely disappointed,” the former president wrote in his memoirs.

Among other activities, Colson helped set up the “Plumbers” to plug news leaks. The Plumbers engaged in illegal wiretapping of Democratic headquarters at the Watergate apartment complex, triggering the scandal that took down the Nixon White House.

Colson was also involved in the creation of the Special Investigations Unit, whose members broke into the office of Dr. Lewis Fielding, the psychiatrist of Dr. Daniel Ellsberg, who had given copies of the Pentagon Papers, a secret account of U.S. involvement in Southeast Asia, to newspapers.

Nixon aides justified the break-in on the grounds of national security, but
Colson later admitted that the agents were trying to dig up damaging information about Ellsberg before his espionage trial.

As the Watergate scandal mushroomed, Colson pleaded guilty to obstruction of justice in 1974, and the felony led him to serve seven months of a one- to three-year sentence at Alabama's Maxwell Prison as Prisoner 23226. 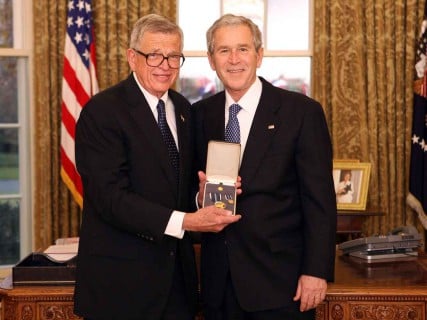 Colson later said he became a Christian before going to jail, and his time behind bars cemented his faith.

“There was more than a little skepticism in Washington, D.C., when I announced that I had become a Christian,” he said in 1995. “But I wasn't bitter. I knew my task wasn't to convince my former political cronies of my sincerity.”

In addition to his work with Prison Fellowship, Colson authored more than 30 books that sold more than 5 million copies, including his seminal 1976 autobiography, “Born Again.”

Colson became an evangelist for better prison conditions and championed what he called “restorative justice,” in which nonviolent criminals should stay out of jail, remain in the community where they committed their crime, and work to support their families and pay restitution to the victim.

Colson also forcefully advocated President Clinton's impeachment and removal from office in 1998 over what he called perjury and obstruction of justice stemming from the Monica Lewinsky affair.

News
A new Billy Graham archive opens on the late evangelist’s birthday
Follow us on Facebook!
Submit your photos to RNS