SPOKANE, Wash. (RNS) After nearly 700 people tried to push Gonzaga University to rescind its commencement speaker’s invitation to Archbishop Desmond Tutu, supporters of the anti-apartheid hero responded with 11,000 signatures of their own.

Opponents claim the Jesuit school had lost sight of its Catholic values by inviting the former Anglican archbishop of Cape Town, South Africa, to speak at next month’s commencement and receive an honorary Doctor of Laws degree.

Now a second petition is circulating, this one protesting the anti-Tutu petition. 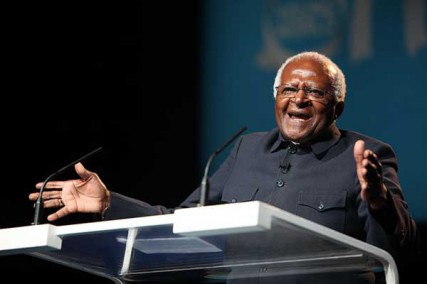 Desmond Tutu at One Young World.

“For some time now the religious right, and Catholic right in particular, has been succeeding in creating these ridiculous controversies around who speaks on Catholic college campuses,” said Michael Sherrard, director of Faithful America, an online community sponsored by Faith in Public Life.

The original petition, spearheaded by Spokane attorney Patrick Kirby, called Tutu an inappropriate choice because he supports abortion rights, has made offensive statements toward Jews, and supports contraception and the ordination of gay clergy.

In response, Faithful America launched its own petition urging Gonzaga administrators not to back down. Within 48 hours, the petition gained 11,000 signatures.

Gonzaga President Thayne McCulloh said the university would continue with commencement as planned.

“We are very much looking forward to having him,” he said. “I really believe that this is very consistent with what both the church and Jesuits want for its institutions; and of course in any community people will have different points of view around that. But we believe what’s most important here is celebrating the achievements of our graduates and faculty.”

McCulloh said the archbishop is an example to all Christians, particularly for his work fighting apartheid. “We’re not just simply choosing somebody who people know,” McCulloh said.

(Tracy Simmons is the editor of SpokaneFAVS.com)

Opinion
My child with Down syndrome is not a political statement — and neither is Amy Coney Barrett’s
News Analysis
The top three faith moments in the Harris-Pence vice presidential debate
Opinion
Calling all women: It’s time to take our stand together against tyranny and injustice
News
Nationalism ‘must not prevail,’ Pope Francis says, addressing the United Nations
Spiritual Politics
With Ginsburg’s seat open, abortion moves to the center of the 2020 election