(RNS) As millions of Americans bow their heads next Thursday (May 3) for the annual National Day of Prayer, atheists, humanists and other nontheists will mark a day of their own.

The National Day of Reason – or “NDR” in the shorthand of the nontheist community – will also be held May 3, part protest, part celebration and totally godless. 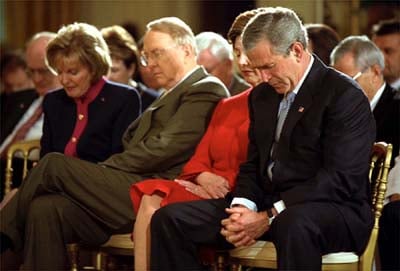 President Bush and wife Laura bow their heads along with National Day of Prayer Chairwoman Shirley Dobson and her husband, religious broadcaster James Dobson, at a May 2003 ceremony in the East Room of the White House. President Obama has said he will appeal a federal judge’s ruling that the law creating the National Day of Prayer is unconstitutional, even though he declined to host a Bush-style observance at the White House.

“In times of great conflict and worry, people want to look to a higher power, and I am sympathetic to that, ” said Paul Fidalgo, communications director at the Center for Inquiry. “But our day puts the focus back on people and what we can do for ourselves. We are trying to make a better world on our own by emphasizing good works and good deeds on the day.”

To that end, local groups of nontheists will hold blood drives (Groton, Conn.) training in lobbying politicians (Raleigh, N.C.) and voter registration drives (Flagstaff, Ariz.), as well as marches, rallies and social gatherings. One group in Putnam, Conn., is holding a “science for reason” book exchange — turn in a Bible and receive a free copy of Charles Darwin's “The Origin of Species,” among other titles.

NDR was started in 2003 by a Washington-based group of humanists who viewed government participation in the National Day of Prayer as a violation of the separation of church and state.

The victory was short-lived, as a higher court ruled in 2011 that government participation did not equal compulsory participation.

This year, while there are no pending legal challenges, nontheist groups would still like to see the National Day of Prayer become a strictly private holiday.

“We feel that having our chief elected officials proclaim a religious day to be a clear violation of the separation of church and state,” Fidalgo said. “Besides that, it is exclusionary not just for nonbelievers but to everyone who does not buy into monotheism.” 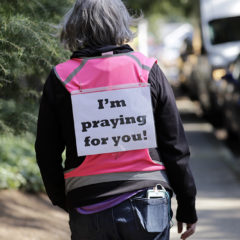 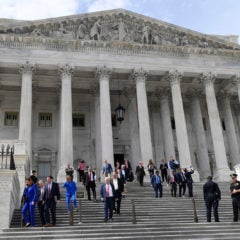