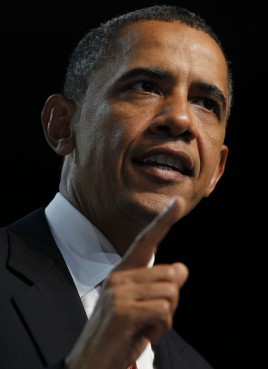 “At a certain point, I’ve just concluded that for me personally it is important for me to go ahead and affirm that I think same-sex couples should be able to get married,” Obama said, less than a week after Vice President Joe Biden also backed same-sex marriage.

“I had hesitated on gay marriage in part because I thought that civil unions would be sufficient,” Obama said. “I was sensitive to the fact that for a lot of people, the word marriage was something that invokes very powerful traditions and religious beliefs.”

Obama's announcement on Wednesday marked a shift in his religious views on marriage.

When he was campaigning for the Senate in 2004, Obama said: “What I believe, in my faith, is that a man and a woman, when they get married, are performing something before God, and it’s not simply the two persons who are meeting.”

Obama repeated that sentiment in a 2008 campaign event at Rick Warren’s Saddleback Church, saying “I believe that marriage is the union between a man and a woman. For me as a Christian, it’s also a sacred union. God’s in the mix.”

But on Wednesday, Obama cited his faith as part of the reason he changed his views:

“This is something that, you know, we’ve talked about over the years and (Michelle Obama), you know, feels the same way, she feels the same way that I do. And that is that, in the end the values that I care most deeply about and she cares most deeply about is how we treat other people and, I, you know, we are both practicing Christians and obviously this position may be considered to put us at odds with the views of others.

“But, you know, when we think about our faith, the thing at root that we think about is, not only Christ sacrificing himself on our behalf, but it’s also the Golden Rule, you know, treat others the way you would want to be treated. And I think that’s what we try to impart to our kids and that’s what motivates me as president and I figure the most consistent I can be in being true to those precepts, the better I’ll be as a as a dad and a husband and hopefully the better I’ll be as president.”

News of Obama's “evolution” quickly spread on Twitter. Here's a sampling of what religious leaders had to say. (If you have trouble viewing this Storify feature with your web browser, you can also see it here.)

News
How opposition to Prop 8 led Latter-day Saints to back Senate’s same-sex marriage bill
Follow us on Facebook!
Submit your photos to RNS