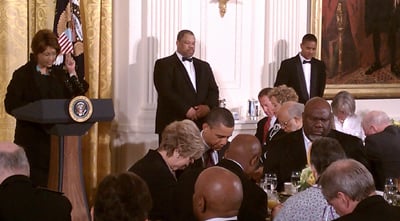 WASHINGTON (RNS) After nearly four years in the Oval Office, President Obama is incorrectly thought to be Muslim by one in six American voters, and only one quarter of voters can correctly identify him as a Protestant, according to a new poll.

(RNS) President Obama and his family pray during Easter services at Allen Chapel AME Church in Washington on April 4, 2010. As many as four in 10 Americans cannot identify the president as a Christian. RNS file photo courtesy Pete Souza/The White House.

Voters do better identifying Mitt Romney’s Mormon faith, according to a poll released Thursday (May 10) by the Public Religion Research Institute in partnership with Religion News Service. A slim majority of voters -- 51 percent -- knows the presumed Republican presidential nominee is Mormon.

“Wow. He said it 100 times that he’s not a Muslim,” said Zainab Al-Suwaij, executive director of the American Islamic Congress, expressing surprise over the persistent number of American voters (16 percent) who make the mistake.

Is there something insidious behind the belief, a concerted attack to link the president with a religion that's considered alien -- or worse -- by some Americans?

“I think it’s more a lack of information than an attack on him,” said Al-Suwaij.

While Americans across the board get the president's religion wrong, the religious group that most often thinks Obama is Muslim is white evangelical Protestants (24 percent). American unaffiliated with a religious group make the error least often: just 7 percent identify Obama as Muslim.

Daniel Cox, PRRI’s research director, said the small but not insignificant sliver of Americans who still believe Obama is Muslim is “fascinating.”

“Quite frankly, I’m not really sure what to make of it other than this person, although he speaks quite comfortably about his faith, doesn’t wear his religion on his sleeve,” Cox said. “It’s an important part of who he is, but it’s not an important part of his public persona.”

The poll also found that white evangelical Protestants, who were suspicious of Romney in the early GOP primaries, are warming up to Romney now that he’s the presumptive nominee.

Romney’s support among white evangelicals has jumped 27 percent since October; evangelicals support him over Obama, 68 to 19 percent.

“There are clear signs that white evangelical Protestants are moving beyond any reservations they may have held earlier in the campaign about Romney’s Mormon faith,” said Cox.

Earlier this year, when primary voters faced more choices, evangelicals showed a preference for Catholics Rick Santorum or Newt Gingrich, who campaigned hard on social issues dear to conservative Christians before dropping out.

“Americans want someone with strong religious convictions, but they don’t have to be the same as their own,” said Cox. “The exception is white evangelicals, who want them to be the same.”

But with a Mormon now the presumptive GOP nominee, that’s no longer a possibility for evangelicals, and the poll shows they are coalescing around Romney, Cox continued.  “It’s a binary choice for them between someone who is on the right side of their issues and someone who is not.”

White evangelicals -- depending on how the term is defined and how the question is asked – make up between 20 and 25 percent of American voters. Among Republicans, they are a particularly powerful bloc, representing about 40 percent of GOP voters.

Obama’s support lies in Catholic and mainline Protestant territory. Catholic voters overall say they would be more likely to vote for Obama (46 percent) than Romney (39 percent), though white Catholic voters state a preference for Romney over Obama (48 to 37 percent).

The scenario of four years ago, in which Obama enjoyed strong support among Hispanic Catholics and weaker support among white Catholics, seems to be playing out again.

-- Obama maintains a significant lead over Romney in a head-to-head matchup (47 to 38 percent).

-- Sixteen percent of voters have yet to make up their minds about a presidential candidate. Among this group, Obama holds a slight edge (42 to 37 percent).

-- More than 60 percent of white evangelical, white mainline Protestant and Republican voters know that Romney is Mormon. Less than half of Catholic and Democratic voters know this.

The poll, of 1,006 Americans surveyed between May 2 and 6, has a margin of error of plus or minus 3.5 percentage points.