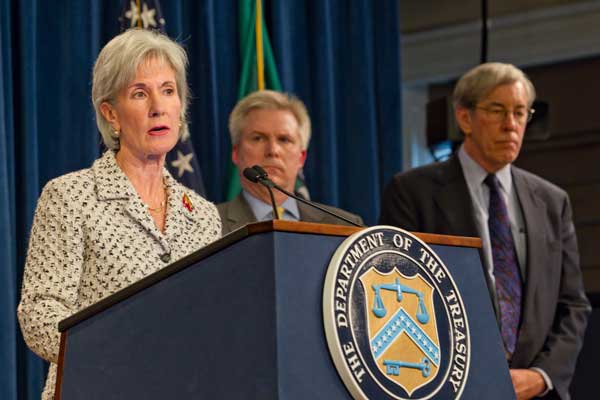 (RNS) Tensions between the Archdiocese of Washington and Georgetown University are escalating ahead of an address on Friday (May 18) by Health and Human Services Secretary Kathleen Sebelius, a conflict that is becoming a microcosm of the political battles raging inside the Catholic Church. 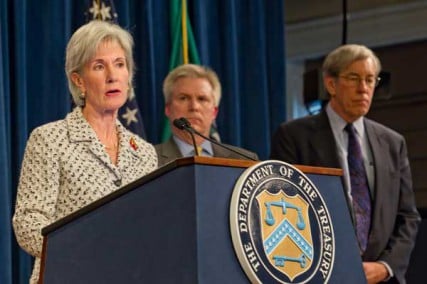 Sebelius, a Catholic whose support for abortion rights and President Obama’s contraception insurance mandate has infuriated bishops and conservative Catholics, was chosen last fall by students at Georgetown’s Public Policy Institute to deliver a speech at the school’s annual awards ceremony on commencement weekend.

The event will be one of Georgetown’s 18 awards programs this weekend – there are 10 other official commencement ceremonies – and Sebelius will not receive an honorary degree.

But when her selection was announced earlier this month, it sparked the ire of conservatives who were still angry that House Republican Budget Chairman Paul Ryan was publicly challenged over his faith and policies when he was invited to give a prestigious lecture to the Public Policy Institute in April.

The Cardinal Newman Society, a conservative watchdog group, called the Sebelius invitation “outrageous,” and on Wednesday (May 16) sent an online petition with 26,000 signatures to Georgetown President John DeGioia, warning him that he had “two more days to stop this scandal and insult.”

A range of conservative Catholics also joined in, demanding that Georgetown rescind the invitation. (Some 90 faculty and administration officials who signed a letter objecting to Ryan’s use of Catholic teaching to justify his severe budget cuts said they welcomed his appearance but wanted him to justify – and change – his views.)

Washington Cardinal Donald Wuerl declined to comment on the Sebelius invitation, but after criticisms continued, the archdiocesan newspaper last Thursday (May 10) published an editorial calling the invitation “a disappointment but not a surprise” because it said Georgetown has strayed so far from its Catholic roots. It also echoed complaints that by allowing Sebelius to speak, Georgetown was directly challenging the bishops, who have become some of the most outspoken opponents of the Obama administration.

On Monday (May 14), DeGioia responded to the criticisms by reiterating Sebelius’ public service accomplishments, most notably her work in advancing Obama’s health care reform and helping to expand coverage to millions of Americans. DeGioia also noted that she is the spouse and the mother of Georgetown graduates.

DeGioia added that the invitation was not a challenge to the U.S. hierarchy and said that “as a Catholic and Jesuit university, Georgetown disassociates itself from any positions that are in conflict with traditional church teachings.” But he also stressed that the university is “committed to the free exchange of ideas” and would not reverse course.

On Tuesday, the Washington archdiocese issued a statement – though still not quoting Wuerl himself – rejecting DeGioia’s arguments. It called the Sebelius invitation a “shocking” action that undermines the Catholic Church and supports the administration in what the hierarchy says is an unprecedented attack on religious freedom because it mandates that insurance companies provide free contraception coverage for most employees.

“It's practically a civil war,” Michael Brendan Dougherty, politics editor at Business Insider and a Catholic, wrote on Wednesday.

The commencement season is always an opportunity for bishops and conservative Catholics to protest the selection of certain speakers and make a point about the perceived liberal drift in Catholic higher education. The uproar over Notre Dame’s commencement invitation to President Obama in 2009 was one notable example, and there have been others so far this spring.

But the addition of the presidential campaign and the increasingly pointed opposition of the bishops to the White House’s policies has heightened the potential for drama this year, and the final act may not have played out.

The Cardinal Newman Society delivered its petition to Wuerl as well as DeGioia, and Philip Lawler, editor of Catholic World News, chided the cardinal by turning the words of Wuerl’s own newspaper back on him. Wuerl’s “consistent failure to speak out,” Lawler wrote, was “a disappointment but not a surprise.”