(RNS) Omar Abdelkader, a student at Northeastern University in Boston, is an observant Muslim but admits that, at least as a kid, he was occasionally seduced by the swish of a perfect jump-shot over the Islamic call to prayer. 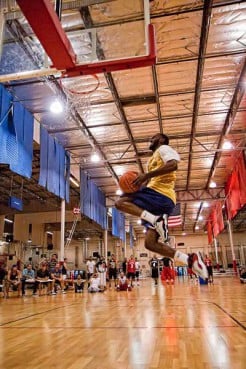 Hanif Madyun (Los Verdugos) goes up for a dunk during the dunk contest with the Muslim Basketball League in Southern California.

“It’s not supposed to be like that, but kids love to play the game,” Abdelkader said while watching a recent Boston Celtics playoff game on a big-screen television at the Islamic Society of Boston Cultural Center. He was joined by about 20 other Muslims, a scene that is being replicated in living rooms and Islamic community centers as the NBA playoffs head toward the finals in June.

At the moment, there are at least eight Muslim players in the NBA (four Turks, two African Americans, one Iranian, and one Tanzanian), and one of them — center Nazr Mohammed of the Oklahoma City Thunder — is currently in the middle of a tense series against the Los Angeles Lakers.

But the special relationship between Muslims and basketball goes beyond any particular player or team and embraces the sport itself. It is not unlike the one described in “Jews and Baseball: An American Love Story,” a 2010 documentary film written by Ira Berkow, a Pulitzer-prize winning sportswriter.

For many Muslim Americans, college and professional basketball provides heroes they can take pride in, symbols of affirmation at a time when they face hostility from some Americans. And it serves as a way to develop fellowship with their fellow believers while reaching out to non-Muslims.

Abdali, 19, is helping organize the youth program of an annual convention sponsored by the Muslim American Society and the Islamic Circle of North America, a pair of religious and outreach organizations. This year's convention will be held in Hartford, Conn., over Memorial Day weekend. The “highlight” is the 3-on-3 basketball tournament, which is expected to draw close to 200 players, Abdali said. “Basketball has become more than a sport; it’s a culture for us.” 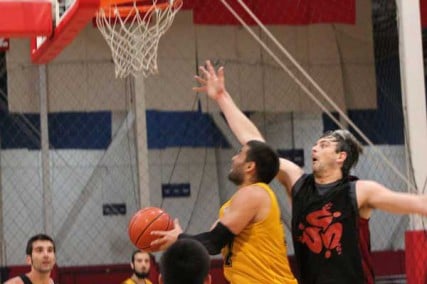 Zeeshan Hyder with the up and under layup during a Muslim Basketball League game in Southern California.

That culture is manifesting itself in Muslim basketball leagues and tournaments across the country, and is even recognized by the country’s major Islamic organizations, which are often criticized for being out of touch with Muslim youth.

Evolving from pick-up games in Chicago, the National Muslim Basketball Tournament was launched in 2010 and now holds at least four tournaments per year. The most popular one is in Chicago and has attracted 42 teams with 8 or 9 players each.

The Islamic Society of North America has recruited the organization to set-up a tournament during its annual convention in Washington D.C. this September.

Many of the leagues are highly-organized and high quality: they include players with college basketball experience, and they have summer and winter seasons where games are tracked with standard basketball statistics. Many leagues are funded by player registration fees and, occasionally, sponsors. That helps pay for certified referees, court rentals, and jerseys.

Prayers are generally held before or after games but in most leagues every third or fourth player is a non-Muslim.

“We do that so we could set a good example to non-Muslims,” said Ziad Pepic, a co-commissioner of the Muslim Basketball League in Southern California. The league started in 2005 and now has close to 300 players.

“We can’t go out to a bar Saturday night and meet people. But being able to go to a basketball court and play is a great way to meet people and build bridges with them,” said Saad Khurshid, one of the organizers of the Muslim Basketball league in Parsippany, N.J.. The league, whose motto is “Building Brotherhood Through The Game Of Basketball,” has more than 200 players who play on teams named after cities in the Muslim world, such as Mecca, Cairo, and Timbuktu.

So what explains the attraction between Muslim Americans and basketball? Abdul Yousef dunking over his brother, Yaser Yousef, during the dunk contest with the Muslim Basketball League in Southern California.

For starters, basketball has provided Muslim Americans with more heroes than any other major sport in America [see box below]. To be sure, Muslims have competed professionally in football, boxing, soccer and other sports, but the number of Muslim basketball stars whose fame put their faith in a positive spotlight is unrivaled. These include all-time NBA leading scorer Kareem Abdul-Jabbar and 12-time NBA All-Star Hakeem Olajuwon, who retired in 2002 after a long career spent mainly with the Houston Rockets.

Shaquille O’Neal, in a 2010 interview with a Turkish journalist, referred to Olajuwon as a “Muslim brother” and said he planned to make the annual Hajj pilgrimage to Mecca.

“We have people to look up to. We have Muslims who have won championships and who have set records,” said Abdali. His favorite player is Olajuwon, who is famous for fasting during games during the Islamic holy month of Ramadan. “He was such an inspiration,” Abdali said.

Shareef Abdur-Rahim, another former All-Star who retired in 2008, also played while fasting.

Many Muslim Americans who are not black also identify with blacks as a fellow minority in a country still marked by prejudice, so they embrace popular culture associated with black culture, especially basketball and hip-hop music.

“Hip hop culture still has a large sway in public life, and there are Muslims who are involved in hip culture, and basketball is integral to that culture,” said Suhaib Webb, a former hip-hop DJ and playground player, who is now imam at the Islamic Society of Boston Cultural Center.

Basketball is also the easiest and most affordable sport for Muslims to organize. Those are important considerations for a faith whose numbers and communal finances are still small. Basketball teams require half the number of players needed in football, soccer or baseball, and they don’t need any special padding or equipment.

“My take is logistics. You don’t need a lot of space like you do in football or soccer,” said Basharat Saleem, director of youth programs for the Islamic Society of North America’s annual convention.

The grass-roots popularity of basketball in the Muslim community means that Muslim Americans have been able to maintain their passion for basketball despite the current absence of pro and college players on par with past Muslim legends. But that may change. The nation’s top high school basketball player, Shabazz Muhammad of Las Vegas, is Muslim, and he will be a freshman at UCLA this year.