Quinn, 23, a quiet engineering student from Springfield, Mo., wanted to settle down, and asked his parents to play matchmaker. Through church friends, they found Thompson, an apple-cheeked 17-year-old from Manhattan, Kan.

“We spent one day together, and then his dad said, `Yes or no? We’re leaving tonight with an answer,’” Thompson recalled with a giggle. 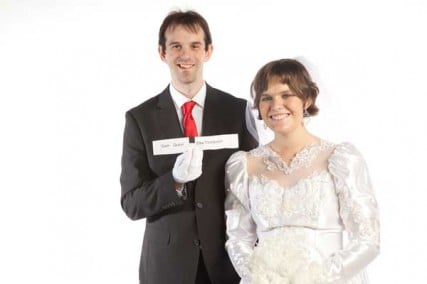 Elke Thompson and Sam Quinn got engaged the old-fashioned way: their parents arranged it.

Most of the courtship occurred among the parents.

“I was very sure that I was going to take whoever they thought was right for me,” Thompson said. “I didn’t want to worry about what I want in a guy.”

Fifteen months later, Thompson wore a wedding dress and Quinn donned a dark suit as they sat in a hotel ballroom in New York City, quietly fidgeting around a table adorned with white flowers, waiting with 42 other couples for the Rev. Sun Myung Moon to bless their union via a satellite video beamed from Korea.

The Korea-based Moon, 93, who says he's been matching couples since he was 8, periodically holds “mass weddings” with thousands of couples on several continents connected via video. The children of first-generation Unificationists, such as Thompson and Quinn, are encouraged to attend the ceremonies.

Several religions practice arranged marriages. Hindu and Jewish matchmakers abound, for instance. But rarely does it rise to the level of dogma. Unificationists believe that marriages arranged through the church and blessed by Moon are “sinless” and foster the kingdom of God on earth, one happy family at a time.

“This is the way to restore world peace,” said Quinn.

Arranged marriages – or lessons imparted by them – could also help lower the American divorce rate, according to research recently highlighted by the Unification Church. 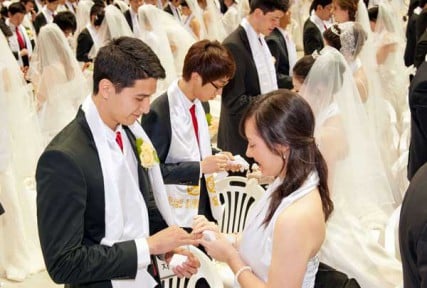 A couple exchanges rings during a mass wedding ceremony arranged by the Unification Church in Korea on March 24, 2012.

With about 12,000 Unificationists in the United States, the days when Moon filled American stadiums for “mass weddings” are long gone. But more than 70 percent of Moon-matched couples are still together, U.S. church officials estimate.

Fading from view and in need of good press, Unificationists are eager to share the secrets of their success, holding a recent press conference in New York City and printing glossy publicity packets.

“You don’t have to do it exactly like I did,” said Jack LaValley, a Unificationist and relationship coach featured in the publicity blitz. “But I have things to show you about how I made a successful marriage, and I wasn’t even in love my wife when I married her.”

In fact, LaValley, who lives in Irvington, N.Y., wasn’t even awake when he got engaged.

A phone call from Korea in 1978 informed LaValley that he had been betrothed to a Korean woman overnight. Moon blessed the couple at a 1982 ceremony in New York’s Madison Square Garden, and they remain happily married, LaValley said.

Arranged marriages like LaValley’s may seem odd and outdated to modern Americans, but that’s precisely the point, Unificationists say. The hook-up, fall-head-over-heels route to the altar clearly isn’t working, the church argues, if nearly half of American marriages end in divorce.

In countries such as India and Pakistan, marriages are often brokered by families or professional matchmakers for religious and cultural reasons. In many of these marriages, expectations start low, love blooms slowly and extended families lend support, said Robert Epstein, a research psychologist.

“Whatever anyone wants to say about the Unification Church, the marital aspect is not crazy,” said Epstein. “It really seems to work.”

But Stephanie Coontz, director of research and public education for the Council on Contemporary Families, says Epstein draws broad conclusions from narrow studies.

“Many arranged marriages in many countries are associated with a lack of choice for young people and are particularly repressive to women,” she said.

“The fact that arranged marriages tend to be more stable is not a measure of success because we know that people are sometimes held in them without any options,” said Coontz, author of “Marriage, A History: How Love Conquered Marriage.”

Moon, now 93, rarely matches couples anymore, leaving it to parents and his church’s “certified matching advisors.” The mass blessings are not legal weddings; couples have civil ceremonies before or afterward.

Ji-il Tark, a religion scholar at Busan Presbyterian University in Korea who has studied the Unification Church, said Moon’s fixation on harmonious families is ironic considering the discord in his own. Some of his children have split from the church, abused drugs and fought bitterly for control of the family’s business empire.

“They ask people to practice something that they do not practice themselves,” Tark said.

But church studies suggest that many Unificationists do practice what Moon preaches. A 1998 survey found that 83 percent of the 2,075 couples matched by Moon in 1982 remained together, according to the Rev. Phillip Schanker, director of the church’s Blessed Family Ministry. Schanker estimates that 70 percent are still married today.

When you agree to marry a stranger for world peace, it’s less likely that you’ll divorce, cheat on, or abuse your spouse, said Jeanne Carroll of Dover, N.J., who was among the couples married at the 1982 ceremony. Carroll met her husband, Jerome, six days before they wed.

Nearly 30 years later, the Carrolls returned to New York with a table full of relatives to see their daughter, Jaime, whom Jeanne matched through the church, be blessed by Moon.

Carroll said it wasn’t hard to keep her daughter from dating, which Unificationists frown upon. Jaime, 23, saw her friends fawn over boys and end up broken-hearted or pregnant. Arranged marriage was an easy sell.

“We’re lucky, in a way, that our society is so bad,” Carroll said. “It makes arranged marriages look really good.”

Do you think Americans can learn something from arranged marriages? Share your thoughts with us by commenting in the section below.