WASHINGTON (RNS) The Ahmadiyya Muslim Community is persecuted around the world, but it has plenty of friends on Capitol Hill. 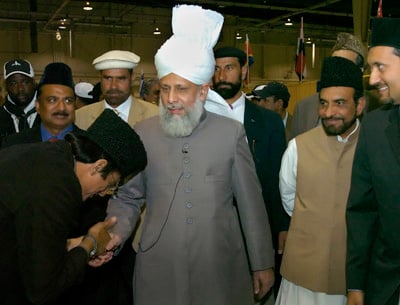 The worldwide spiritual leader of the Ahmadiyya Muslim movement, Mirza
Masroor Ahmad, greets followers of the Ahmadiyya movement during their convention in
Harrisburg, Pa. The movement attracts persecution overseas and skepticism from some U.S.
Muslims because of some unorthodox beliefs.

The Ahmadiyya have faced severe repression, Pelosi said,  “but you refused to turn to bitterness or vengeance.”

“The message we carry is 'if you are being hurt, do not respond with hurt,'” said Ahsanullah Zafar, president of the Ahmadiyya community in the U.S.

The branch of Islam, founded in India in 1889, emphasizes tolerance and nonviolence, and claims to have tens of thousands of followers in the United States and millions more abroad. The Ahmadiyya, also known as the Ahmadi, believe the messiah has already come as the founder of their community, Hadhrat Mirza Gulam Ahmad, a view perceived as heretical by most other Muslims.

The Ahmadiyya are prohibited from freely practicing their faith in Pakistan, Egypt, Indonesia and Saudi Arabia, among other nations, and are often victims of violence that authorities often do little to discourage.

In 2010 in Lahore, Pakistan, two Ahmadiyya mosques were attacked, killing 86 people and injuring 120 during Friday prayers. The Taliban took responsibility.

Globally, the Ahmadiyya have built hospitals and schools and organized disaster relief and development projects around the world. They have also pressed for the separation of church and state.

Katrina Lantos Swett, the chair of the U.S. Commission on International Religious Freedom, asked the audience to stand up for the Ahmadiyya.

“The message of the Ahmadiyya community is a positive call for world harmony and liberty,” Swett said. “We who believe in peace and freedom dare not be silent.”