(RNS) At 26, Syed Farhaj Hassan was a devout Muslim, and a man who took a lot of pride in being one of the relatively few Muslim Americans to join the military and then go to war in Iraq. 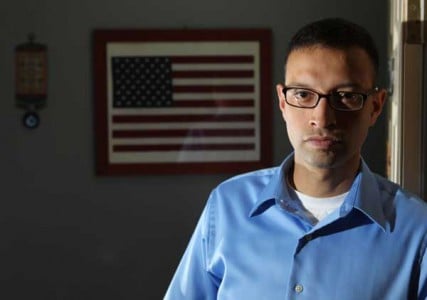 Syed Farhaj Hassan, 35, who is now the first-named plaintiff in a lawsuit filed last week by Muslims Advocates group (on behalf of NJ Muslims) vs. the NYPD is photographed in his home in Helmetta, NJ on June 15, 2012.

He dropped out of Rutgers University and enlisted in the U.S. Army in 2001. He was sent to Iraq two years later, where he served with a unit that assessed and planned the rebuilding of places like the war-torn city of Hillah, where he even slept some nights in one of Saddam Hussein’s palaces.

Born in Chicago and raised in New Jersey, he’d grown up engrossed in military-themed TV shows like “M*A*S*H” and “G.I. Joe.” And nearly a decade after his war service, he’s still patriotic — he’s even an active reservist in a civil affairs brigade.

But these days, Hassan is also frustrated and upset with an arm of the U.S. government. Hassan said that he’s been “betrayed” by the New York City police department for its years of post-9/11 spying on Muslim communities in New Jersey.

Hassan signed on recently to be the lead plaintiff in the first lawsuit to challenge any portion of the NYPD’s surveillance of Muslims — a systematic program that has gone on both in New York and across state borders.

“I was upset that this was happening to a community, simply based on their faith,” Hassan said.

Hassan and his seven Muslim co-plaintiffs seek in their lawsuit, filed June 6 in U.S. District Court, to stop the NYPD from spying in New Jersey. They’re also asking the court to declare that the NYPD has violated their First and 14th Amendment rights. And they want the police department to expunge all records made “pursuant to past unlawful spying.”

There are plenty of people who disagree with Hassan, his co-plaintiffs and Muslim Advocates, the national civil rights group that filed the lawsuit in Newark, N.J., on Hassan and the others’ behalf. A recent poll said New Jerseyans approve of the NYPD spying in New Jersey. And the NYPD itself says the surveillance it has conducted has been careful and that it does not cover all of New Jersey’s Muslims indiscriminately.

“I want no derogatories, I want a crystal-clear record,” Hassan said, referring to his U.S. Army record. “It’s been my job for over 10 years to keep off of lists.”

Hassan, now 35, claims that if his name or license-plate number, for example, were to be discovered by the Army on an NYPD surveillance dossier, “it would only be detrimental to my future in government and to my military career, in my opinion.”

When he joined the military, he noted, officials did a background check on him. “I know I wasn’t on a list of people being watched over” at the time, he said. A simple speeding ticket can be a “derog” in the Army, he added, and “derogs” can affect a soldier’s clearance or the standing he or she has worked to achieve.

“Being on a list as an active surveillance target, definitely a ‘derog,’” he claimed.

According to Mohammad Ali Naquvi, a friend of Hassan’s since they both started attending the Astaana-e-Zehra mosque in Englishtown — each at age 13 — Hassan’s military commitment and ambitions have always been central to who he is.

“He’s always been just so, so pro-American,” said Naquvi, a Manhattan lawyer and an activist who has fought the NYPD’s Muslim spying. “He was always very gung-ho with the freedom and independence, and the rhetoric from the military. He actually believed that sincerely.”

“I can be very honest with you,” Naquvi, 35, said, “a lot of his friends had issues with him joining the military.”

Hassan claims in the civil rights suit that the NYPD has spied on four mosques he’s attended in New Jersey over the years — scaring him away from attending one of those mosques, in particular.

In the 25-page lawsuit, the lawyers from Muslim Advocates paint the NYPD’s spying in New Jersey as coordinated, invasive and long-standing.

“NYPD officers snap pictures (and) take video … of congregants as they arrive at mosques to pray,” the lawsuit alleges. “They also mount surveillance cameras on light poles and aim them at mosques.”

In May New Jersey Attorney General Jeffrey Chiesa announced he had determined the NYPD’s actions in New Jersey did not violate any state civil or criminal laws. And a Quinnipiac University poll released in April found New Jersey voters said, by a margin of 70 percent to 21 percent, that the NYPD is “doing what is necessary to combat terrorism” in the Garden State.

The NYPD did not comment for this article, despite multiple requests. But in a five-page email sent to The Star-Ledger in March, Paul Browne, the department’s spokesman, wrote that “NYPD surveillance has resulted in terrorist arrests, including in NJ, and was done within federal Handschu guidelines,” referring to a New York legal case that resulted in standards for NYPD surveillance of groups.

“We also looked to identify locations where operatives sent from abroad might hope to lie low, just as the 9/11 hijackers did in Paterson, New Jersey,” he added. And he noted, “These plainclothes officers were not conducting blanket ongoing surveillance of communities.”

Hassan draws a bright line between law-enforcement actions taken because officials have dug up “actionable intel” or leads and a general spying on and cataloging of Muslim activities simply because “you’re a Muslim, and we need to watch you.”

“If there is actionable intel, then by all means, conduct the law-enforcement operation that you need to,” he said. “But this case doesn’t revolve around law enforcement and hog-tying them from doing their job. In the end run, good law enforcement is keeping all of us safe.”

(Jason Grant writes for The Star-Ledger in Newark, N.J.)