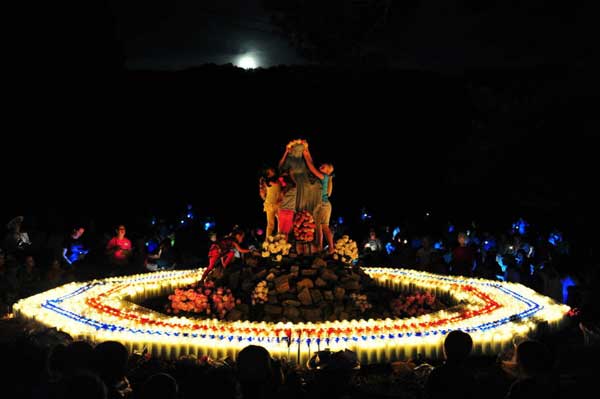 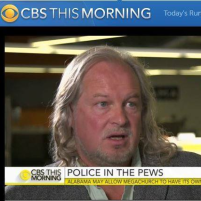 BIRMINGHAM, Ala. (RNS) Could a Virgin Mary statue under a pine tree in the middle of a cow pasture in rural Alabama one day become an officially recognized international pilgrimage site of the Roman Catholic Church?

Yes, it could, said Michael D. Murphy, chairman of the anthropology department and a professor of anthropology at the University of Alabama who has specialized in studying the role of Virgin Mary apparitions in the Catholic Church.

“Without a doubt,” Murphy said. “Some very unusual places have ended up becoming pilgrimage sites.” 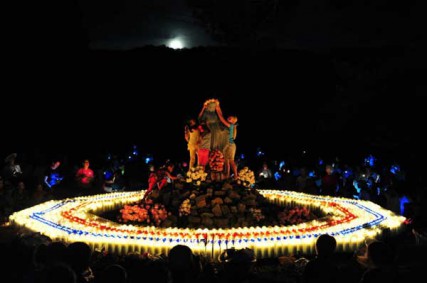 Caritas of Birmingham decorated the site of reported Marian apparition visions with red, white and blue candles for the Fourth of July.

Marija Lunetti, the visionary who has been reporting daily visions of the Virgin Mary since she was a teenager in Medjugorje, Yugoslavia, had two outdoors apparitions in a field under a pine tree in Shelby County, Ala., during a highly publicized “five days of prayer” July 1-5 at Caritas of Birmingham.

Lunetti was one of six Medjugorje youths who began reporting apparitions of Mary in 1981. She was 16 at the time and known as Marija Pavlovic. Now 47, married with four children and living in Italy, Lunetti continues having daily visions.

She has been visiting Alabama since 1988, when she came to donate a kidney at UAB Hospital for her brother, Andrija Pavlovic. She had apparitions in the hospital and at the home of Caritas of Birmingham founder Terry Colafrancesco.

Caritas is a ministry that organizes tours and publishes books and pamphlets promoting the visions of Medjugorje, in what is now Bosnia-Herzegovina. Lunetti also began having apparitions in the field under the pine tree, at Colafrancesco’s request, where large numbers of pilgrims could gather around to pray.

Colafrancesco expressed confidence during Lunetti’s latest visit that the Vatican will eventually endorse the Medjugorje apparitions.

“The Vatican is going to take the taboos off and let it flower,” he predicted.

Murphy said there is a good chance the church will eventually endorse the visions — just as it did the apparitions in Lourdes, France, in 1858 and Fatima, Portugal, in 1917. But it won’t happen as long as the visions are still going on, because of the potential for heresy. The Catholic Church has monitored and investigated the apparitions for 30 years, neither endorsing nor forbidding them. A Vatican commission is currently studying the visions.

“The Catholic hierarchy is very reluctant to sign off on authenticity as long as they are still current,” Murphy said. “If they were to approve and then the seers start making heretical statements the Vatican doesn’t approve of, they’re stuck.”

“The typical strategy is to wait until all the critical people are dead,” Murphy said.

The visions already would have been shut down if there had been blasphemous statements made, he said. Many church officials have commented on the fact that interest in the visions has revived many people's faith.

“That’s one of the reasons the church hasn’t clamped down,” Murphy said.

There has been little specific in the reported messages at Caritas, which are heavily peppered with talk of faith, devotion, peace and prayer. Much of the time, Lunetti reports that the Virgin Mary appeared, looked over the crowd and blessed their religious medallions, without a specific message. During the apparitions, Lunetti says the Virgin Mary appears to her and prays over the pilgrims, although they cannot see her vision.

Colafrancesco said the week of prayer drew about 15,000 to 18,000 visitors from states across the country.

“A lot of people are telling us they’re deeply moved by it,” Colafrancesco said. “People are leaving here saying they’re going to start prayer groups.”

EWTN talk show host the Rev. Mitch Pacwa, who has been to Medjugorje and did a documentary about it with actor Martin Sheen, said the Vatican will look carefully at the reported messages.

For example, early on, there was a dispute between Franciscans based in Medjugorje and a regional bishop, who was skeptical of the Marian apparitions.

“Some of the visionaries took a stance and said the Virgin Mary is on the side of the Franciscans,” Pacwa said. “That’s odd. That’s inappropriate. The church does not want the visionaries to ask questions trying to get answers. If it’s from God, God is going to take the initiative.”

EWTN, the Catholic broadcasting network based in Irondale, welcomes Catholics who visit Alabama to go to Caritas, but does not take a stand on the apparitions or make recommendations to pilgrims.

Pacwa said there is no chance for the visions to get approval while they’re still going on, and it’s a long shot even after they stop.

One quirk that emerged was when two of the Medjugorje visionaries said the Virgin Mary endorsed a book, “The Poem of the Man-God,” that had been condemned by the Vatican. The fanciful 1940s biography of Jesus by Maria Valtorta contains details like a dancing girl brushing up against Jesus, Joseph giving young Jesus an anachronistic tool kit with screwdrivers and the Virgin Mary making statements such as “man disgusts me,” Pacwa said.

“The book had been condemned by the church in 1959 because it said a lot of silly things that contradicted what was in the gospels,” Pacwa said. “The church rejected it. Any vision must be judged by revelation that exists in the gospels. You can’t say anything you want.”

What may be the unraveling of the Medjugorje visions is the lack of any spiritual depth to the messages, Pacwa said.

“That is a much more pointed critique,” he said.

The writings of Sister Faustina, now a saint, describe visions from Jesus. “As you kept reading, a new depth of spiritual life began to show itself,” Pacwa said. “You can see definite growth over the years in her spiritual messages. I don’t see that with the messages of Medjugorje. They tend to be the same thing over and over again. Something I would look for is a growth in spiritual depth. I haven’t sensed it.”

Pacwa said Vatican theologians will take all that into account and that Medjugorje in the end may be denied church approval.

“I don’t have a sense this is going to go swimmingly. I am very impressed with a number of the positive things I have experienced there. I have a lot of respect for the good things that have occurred. But I’m not going to be naive about some of the problems. It has to be dealt with, with full integrity.”

(Greg Garrison writes for The Birmingham News in Birmingham, Ala.)