(RNS) For one hot August night, the St. Paul Saints, a Minnesota minor league baseball team, will become the “Mr. Paul Aints” in a game sponsored by a local atheist group. 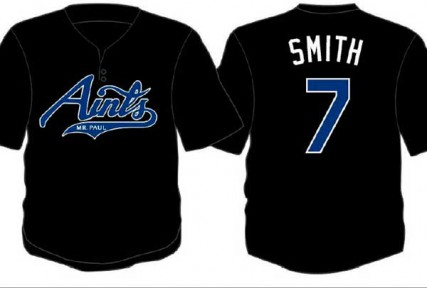 The St. Paul Saints, a Minnesota minor league baseball team, will become the “Mr. Paul Aints” in a game sponsored by a local atheist group.

Dubbed “A Night of Unbelievable Fun,” the Aug. 10 game against the Amarillo Sox will include an auction of players’ special “Aints” jerseys, fireworks and a ceremonial first pitch by David Silverman, president of American Atheists.

The letter “S” in all Saints signs and logos around the stadium will be covered, and there are planned references to Big Foot, UFOs and other targets of the skeptical community, team officials said.

“We want to show that atheists can have fun,” said August Berkshire, president of Minnesota Atheists, which is sponsoring the event with American Atheists a day before its regional conference in downtown St. Paul.

One atheist blogger wondered if the seventh inning stretch would include the singing of “Dog Bless America.”

Saints General Manager Derek Sharrer told The Associated Press the team has “no intention of mocking or making fun of anyone’s faith.”

The Saints have hosted several religiously themed events before, including Christian concerts and a Jewish Heritage Night. It would be “hypocritical” to tell the atheists no, Sharrer said.

The team, which is partly owned by actor Bill Murray, has a history of unusual promotions and events. The team’s mascots are two pigs named Kim Lardashian and Kris Hamphries who carry baseballs to the umpires.

Nor is this the Saints' first dip into the religion and science debate.  In 2010, the team gave away a rotating Cro-Magnon/Charles Darwin bobblehead doll to salute the 150th anniversary of the publication of Darwin’s “On the Origin of Species.”

Opinion
Harvard’s ‘atheist chaplain’ is no contradiction. It’s a chance to grow as a nation.
Follow us on Facebook!
Submit your photos to RNS