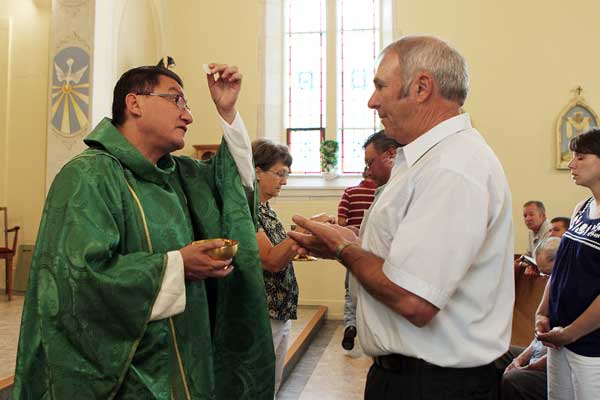 MARINE, Ill. (RNS) Joseph Haegele remembers going to the church across the road from his grandparents' house on Windmill Street in this farm town in 1956, when he was 5 years old.

Haegele has attended other Catholic churches in the area. But St. Elizabeth's remains special to the former General Chemical employee and his wife, Lynn. The annual church picnic has been part of family tradition for decades. And after their 25-year-old son died of a brain tumor 15 years ago, Haegele said, the couple adopted a priest's flower garden behind St. Elizabeth's rectory as a memorial. 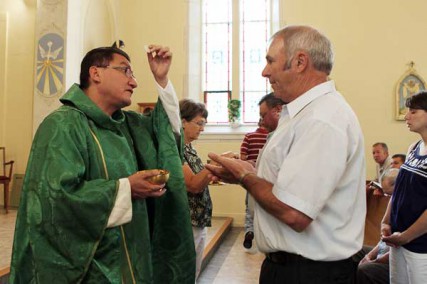 But a Madison County Circuit Judge Duane Bailey has ruled that Haegele can worship at St. Elizabeth's only on the last weekend of each month.

Legal experts say the judge's order illustrates the conflict between orders of protection and religious liberty. And prior cases have affirmed the rights of courts to issue restraining orders on individuals even if it affects their ability to attend a house of worship.

Bailey's order is extraordinary in that it imposes not only distances of separation, but specifically bars access to a church on particular days.

Charles Haynes, a senior scholar with the First Amendment Center in Washington, said he'd "never seen anything quite like" Bailey's order.

"It's pretty problematic to limit a person's attendance at church," Haynes said, adding that the order "enters into an area that I'm not sure judges have any business in."

What led to Bailey's order was a decade-long tale involving a family feud over hundreds of acres of farmland that split 11 Haegele siblings into two factions. Accusations along the way have included notary fraud, harassment and stalking. 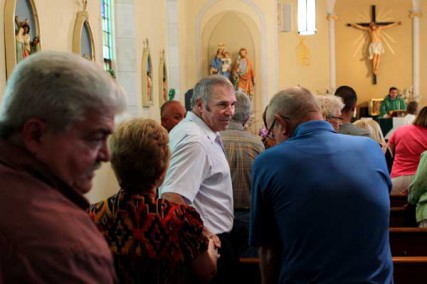 After years in which various courts have attempted to broker peace, Bailey ruled in April that one faction of Haegele's siblings proved that he'd violated a 2010 protection order instructing him to stay 100 feet away from his family members, and found him in contempt of court.

Except for the last weekend of the month, according to Bailey's order, Haegele is to stay away from St. Elizabeth's and stay at least 200 feet from his grandparents' old house, where his brother John Haegele now lives.

At his house on Route 140, 13 miles away in New Douglas, Joseph Haegele sat in his kitchen recently — a toothpick in his mouth and wearing wide, gray sideburns and brown cowboy boots.

"Why shouldn't I be able to go to whatever church I want to go to?" he asked.

The dispute began among the 11 Haegele children in 2002, when their father died without leaving a will, Joseph Haegele said. He left hundreds of acres of prime farmland that also included oil rights and machinery that Haegele says is worth millions.

As the siblings began to quarrel over the trust left by their father (their mother died six years earlier), two factions developed.

As brothers and sisters aligned with one another and hired attorneys, the two sides stopped talking and began accusing. Joseph Haegele — 61, the oldest of the siblings — has accused John Haegele, 14 years younger, of stealing notary stamps to fake legal documents. John Haegele has accused his brother of harassing his family and stalking his 10-year-old daughter.

John Haegele did not respond to requests for an interview and other siblings on his side of the argument would not speak to a reporter.

But court documents show the feud started almost immediately after their father died in October 2002. That December, John Haegele says in court records, Joseph Haegele tried to run him off Interstate 55 near Collinsville.

For the next eight years, John Haegele recorded instances of harassment from Joseph Haegele — everything from hang-up phone calls at 3 a.m., to a threat of "causing a scene" at John Haegele's parties during the annual picnic at St. Elizabeth's, according to court documents.

Joseph Haegele calls every instance his brother documented "a crock of baloney."

In 2010, the sides signed a legal agreement to stay away from each other. But in 2011, John Haegele documented 77 times when, he said, Joseph Haegele broke that agreement by passing by a house John Haegele owned near Joseph Haegele's home. At the end of 2011 and the beginning of 2012, the younger brother documented other occasions when his sibling attended church at St. Elizabeth's.

Attorneys for John Haegele's faction compiled all the incidents into a complaint requesting an order of protection against Joseph Haegele, and Bailey restricted Joseph Haegele's access to the church in April.

Bailey did not return a call seeking comment. He is not alone in trying to navigate the question of when courts can tell an individual to stay away from a church.

In 2006, a Louisiana man asked a court to reduce the distance that he'd been ordered to stay away from his wife's residence from 100 yards to 50 yards. The man argued that his wife's house was within 100 yards of his church and that the order restricted his constitutional right to worship freely.

An appellate court denied the request, saying the man had consistently ignored the court's order to stay away from his wife and her "right to be protected from abuse, harassment, and stalking outweighs" his "perceived constitutional right to attend the church of his choice."

When he first heard the judge's ruling allowing Joseph to attend Mass at St. Elizabeth's only once a month, Bohorquez said he felt Bailey had made "a pastoral, rather than a legal" decision.

"He was trying to keep them away from each other," the priest said. "It would have been an issue if the only other Catholic churches were outside a 100-mile radius. If that had been the case, I would have had to address this — talk to the judge, or even convince the community to take a stand."