(RNS) A hotel in the United Kingdom has replaced in-room Gideon Bibles with the soft-porn best-seller Fifty Shades of Grey.

The change was made earlier this month in all 40 guest rooms at the Damson Dene Hotel in the Lake District of England. 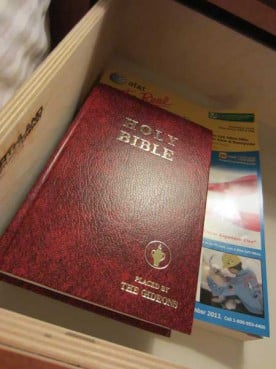 The Holy Bible placed in a hotel by the Gideons.

The hotel's owner Jonathan Denby explained his decision in a blog post:

“Tonight millions of women will be curling up in bed with a good book and you can bet your life it won't be the Bible. More likely than not it will be Fifty Shades of Grey. I haven't read the book yet – I'm not in the target audience – but I'm told it's a ripping good yarn and everyone who's in the target audience loves it. This made me wonder about the sense of providing a book, the Gideon Bible which no one reads, and many dislike, in the bedside cabinet of our hotel bedrooms, instead of a book which everyone wants to read, such as Fifty Shades of Grey.”

Denby bought the hotel from a Methodist group 10 years ago, according to NBC News.

He said he had been considering substitutions for a long time.

“I was thinking originally of putting in a book by Ayn Rand — Atlas Shrugged was my first thought,” Denby told NBC News.

Denby said he did not do it for any philosophical reasons.

That hasn't stopped the local vicar from publicly denouncing the change.

The Rev. Michael Woodcock — parish priest at St. Mary's Church in Crosthwaite, where the hotel is located — told British media that the hotel's decision is just a gimmick, according to NBC.

There is also much criticism coming from the United States, where the Gideon Bible is more popular, Denby said.

“People in the States feel much more strongly,” he told NBC. “We've had quite a few e-mails quoting the scriptures to us and suggesting that it would be a good thing to put the Bible back.”

In an update on Thursday (July 26), Denby posted that response in England to the move had been “overwhelmingly favourable” but that emails continued to pour in from the U.S. characterized by a “very un-Christian combination of lies, threats and intimidation.”

He also noted that an NBC online poll on the move drew nearly 32,000 responses to the question “Which book would you be more likely to pick up in your hotel room?” As of Thursday, 42 percent said Fifty Shades of Grey and 37 percent said the Bible, with the rest expressing no preference.

Denby said in his blog that he's not completely giving up on the Bible. “I'll keep a couple behind the reception desk so that if any guest whose preferred bedtime reading happens to be the Bible finds that they have forgotten to pack their copy, they'll be pleased to read in the guest handbook that they can borrow a copy from the receptionist.”