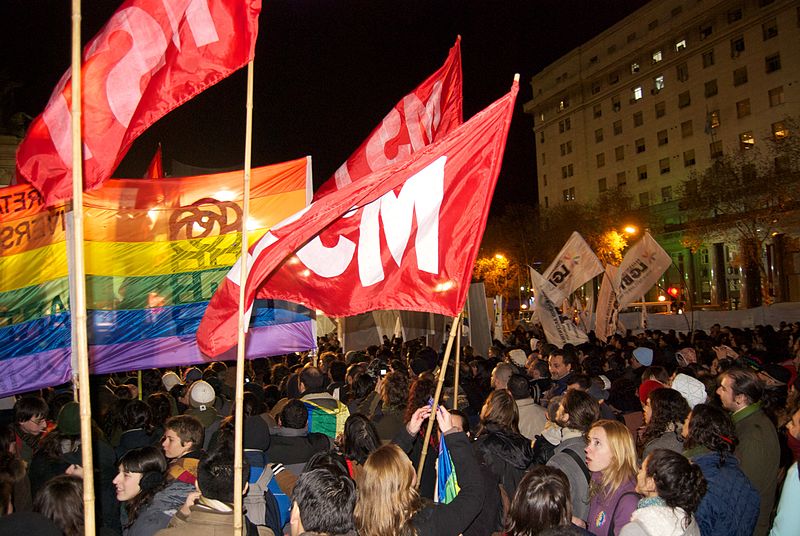 The likelihood that this year's Democratic Party platform will support same-sex marriage and condemn the Defense of Marriage Act creates as bright a culture war line as one could wish with the Republicans, for whom the sanctity of the Old-Time Nuptuality has long been an article of partisan faith. In 2008, their platform had this to say under the heading of "Preserving Traditional Marriage":

Because our children’s future is best preserved within the traditional understanding of marriage, we call for a constitutional amendment that fully protects marriage as a union of a man and a woman, so that judges cannot make other arrangements equivalent to it. In the absence of a national amendment, we support the right of the people of the various states to affirm traditional marriage through state initiatives.

Does anyone expect this year's GOP platform to dial it back?

Whatever the political consequences, there's seems to be little question that the Democrats do have or will soon have a majority of Americans on their side. As with the movements to secure equal rights for African Americans and women, so gay rights moves inexorably forward, as well they should. How, then, should we deal with religious refusals to get with the program?

As usual, Ross Douthat offers the readers of the New York Times little help in thinking this through. In last Sunday's column, "Defining Religious Liberty Down," Douthat takes the position that because the free exercise of religion involves more than freedom of worship, religious objectors to the HHS contraception mandate or Chick-Fil-A's opposition to gay marriage should be accommodated, not condemned. But, says he, the "Western leadership class" (i.e. Times readers) doesn't really respect religious liberty and ought to stop paying lip service to it.

Douthat does concede that religious liberty doesn't entitle cannibalistic sects to eat their neighbors. But what about a tougher issue, like the religious liberty to racially discriminate. Does Douthat think that Bob Jones University v. United States, wherein the Supreme Court said it was OK for the IRS to remove Bob Jones' tax exemption for racially discriminating, was wrongly decided?

It is not easy to decide how to respect liberty in the face of changing social norms--norms that sometimes even Douthat himself might agree had changed for the good. If society collectively decides to guarantee the rights of gay couples, can it in good conscience underwrite religious adoption agencies that discriminate against them? How do we balance society's decision that women should have a right to free contraceptive services against a church's principled opposition to contraception?

What can be said without fear of contradiction--but which conservatives like Douthat almost never say--is that the member of the Western leadership class who did the most to tilt the legal balance away from religious liberty in America is Justice Antonin Scalia. In Employment Division v. Smith, he persuaded four other justices that the claim of a constitutional right to free exercise was null and void in the face of any neutral law of general applicability. Until then, the court was prepared to require a "compelling state interest" to overturn free exercise claims. In U.S. jurisprudence, it was Antonin Scalia who defined religious liberty down.