(RNS) At Charity Missionary Baptist Church in North Charleston, S.C., the Rev. Nelson B. Rivers III supports and follows his African-American congregation’s policy: They will only conduct marriages between one man and one woman. 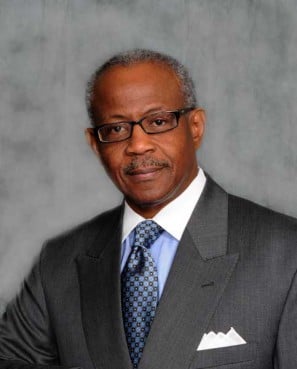 At Charity Missionary Baptist Church in North Charleston, S.C., the Rev. Nelson B. Rivers III supports and follows his African-American congregation’s policy: They will only conduct marriages between one man and one woman.

“We see no conflict in that,” Rivers said, “because I am the leader of the r-i-t-e at my church, the rites, but I’m also a strong advocate of the r-i-g-h-t-s of my members.’’

President Obama’s support for gay marriage, followed quickly by the NAACP’s, has put some black clergy in a bind, torn between their political loyalties and their religious beliefs. For some, like Rivers, it’s been a both/and proposition, while others say they can support the president without endorsing his position on gay marriage.

But the issue has highlighted that the black church has never been monolithic. The black church’s response is further complicated by the fact that people in the pew may not always go along with what pastors in the pulpit preach.

“You’ve got to balance religious convictions with all of your other interests, your racial interests, your economic interests,” said Andra Gillespie, an associate professor of politics at Emory University who studies African-American politics. “You’ve got to balance religious convictions with all of your other interests, your racial interests, your economic interests,” said Andra Gillespie, an associate professor of politics at Emory University who studies African-American politics.

Most blacks still prioritize their rights as African-Americans and economic issues over social issues, she said.

Drawing the same distinction as Rivers, the African Methodist Episcopal Zion Church issued a statement at its recent quadrennial meeting declaring that its churches cannot perform same-sex rituals. But it also noted that while it differed with Obama on gay marriage, his positions on health care and student loans are “consistent with the interests of our congregant members.”

“We do not believe in same-sex marriage but we do not believe that’s the only issue,” explained AME Zion Bishop Darryl Starnes. “There is more in the scriptures about treating the poor right and championing the cause of the oppressed than some of these other issues.”

Likewise, the Pentecostal Assemblies of the World has said it is “in conflict” with the president’s stance but applauds Obama for “his many achievements in improving the quality of life for all Americans.” 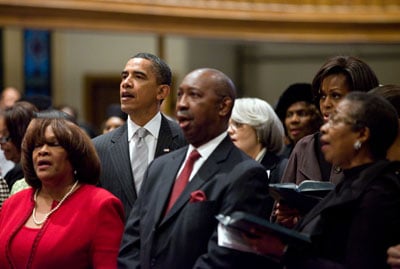 Overall, African-Americans remain one of the groups most opposed to gay marriage: 51 percent are opposed, while 40 percent support it, according to a recent poll by the Pew Forum on Religion & Public Life. That support, however, has edged up from 26 percent just four years ago.  Among black Protestants, opposition is slightly higher, at 54 percent.

Pew researchers said Obama’s support hasn’t noticeably shifted opinion in either direction, but some smaller groups are seeking to galvanize lingering black skepticism over gay marriage to make it a wedge issue for African-American voters this November.

“I would hope that the president would become wise, come to his senses and know that he has made a mistake,” said the Rev. William Owens, president of the fledgling Coalition of African-American Pastors, at a recent National Press Club news conference.

His group is circulating an online petition to ask Obama to “repudiate his assertion that gay marriage is a civil right.”

Still others, including the Washington-based group Many Voices, are working to reshape the notion that all black churches are against gay rights. Rather, many clergy are thinking carefully about their stance, said the Rev. Cedric Harmon, co-director of the three-year-old nonprofit.

Rivers said while his church doesn’t sanction same-sex ceremonies, another across town might conduct them. If gay members were to request such a service from him, he said he would recommend they find such a congregation for a ceremony because it is their right to have one.

“On the issues of justice, fairness and equality and the prophetic role of clergy and standing up for what is right, there is much consensus,” he said. “On the other issues, how you interpret doctrine, that’s up to your church.”