(RNS) What was supposed to be a slam dunk for nontheists has become a slap in the face after a petition on behalf of a jailed Indonesian atheist failed to attract even one-third of the signatures it needed to gain White House attention.

The petition was launched last month by The Center for Inquiry, a humanist organization, on We The People, a government website designed to bring grass roots efforts to the attention of the White House. Petitions must garner 25,000 signatures within 30 days in to secure a government response. 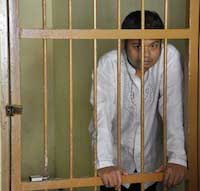 The atheist community has embraced the cause of an Indonesian man, Alexander Aan (pictured here behind bars), who was beaten and jailed after denying God’s existence on Facebook and posting cartoons of the Prophet Muhammad.

The petition called for the Obama Administration to pressure the Indonesian government to free Alexander Aan, who was arrested for the criminal offense of expressing his unbelief online. The petition garnered about 8,000 signatures when it expired Thursday (Aug 16).

That failure has left many atheists, humanists, skeptics and other nonbelievers scratching their heads. If, as they believe, their community has grown in numbers, strength and organization in the last decade, why didn’t more people sign the petition?

“It didn’t fail for lack of effort,” said Michael De Dora, CFI’s director of government affairs, the author of the petition and its first signatory. “So there is a sense of confusion right now internally about why this failed.”

Beside CFI, the petition had the backing of most major nontheistic groups, including The American Humanist Association, American Atheists, Atheist Alliance International and Secular Students Association, all of which issued action alerts, pushed it on social media and provided links to the petition.

So why were so few moved to action? De Dora received emails from some saying a petition would have little effect – especially one aimed at a president who already has enough religious headaches in an election year. In addition, Aan’s arrest did not attract widespread media attention, so many people may not have recognized his name. Others reported technical problems with the We The People website.

“Beyond that I am at a loss for an explanation,” De Dora said. “I simply do not know why it is the case we reached so many people and so few people signed the petition.”

The petition’s failure has exposed another paradox of the nontheist community. In recent years, it has made an organized effort to promote its members as compassionate, caring and concerned about justice. The unofficial motto “Good without God” has been used to rally support for charitable organizations, food banks and blood drives, services for the homeless and disaster relief efforts.

“It is one thing to talk about ‘Good without God’ and have panel discussions about secular ethics, but it is quite another to take all that and make it part of your moral fiber and make a habit of doing good,” De Dora said. “I think that is something the community still needs to work on.”

Hemant Mehta, whose Friendly Atheist blog is widely read in nontheist circles, wrote several posts in support of the Aan petition and is equally perplexed. He compared Aan to Jessica Ahlquist, the Rhode Island student who was widely vilified last year when she requested the removal of a prayer banner from the walls of her public high school. She received an outpouring of support from the nontheist community, including legal aid and a large scholarship.

“Any one of us could have been in her situation and we wanted to protect her,” Mehta said. “It hits home. But an atheist in a foreign country who gets oppressed by his government because of his atheism? It's hard for American atheists to really make sense of that. We're not used to fighting those battles.”

There’s also the issue of distance – something that has often hindered a quick American response to human rights violations in such places as the Sudan, the Balkans and Syria. “If Aan’s story had happened in America, we would have gotten those signatures,” he said.

Still, efforts on Aan’s behalf are not dead. Atheist Alliance International continues to raise money for his legal defense, and earlier this month, De Dora and representatives from several other nontheist groups met with representatives of the State Department’s Office on International Religious Freedom to discuss the case.

“The petition failing shows us more than ever that the public needs to be educated on the issue,” he said. “That means we have a lot more work to do.”