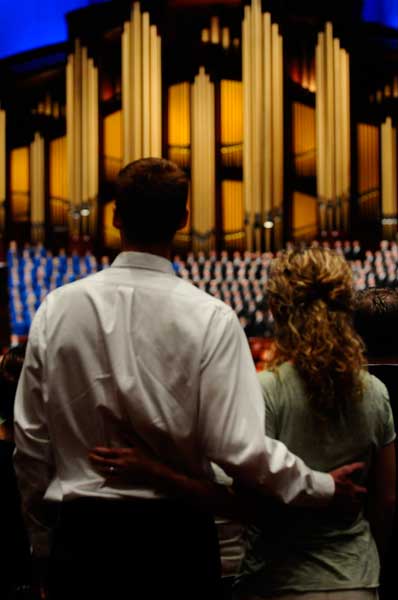 SALT LAKE CITY (RNS) For some Mormon feminists, there can be only one goal on the road to gender equality: ordination to the all-male priesthood.

After all, every worthy male in the Church of Jesus Christ of Latter-day Saints — starting at age 12 — is ordained in this priesthood. It is seen as a holy power, described as the authority to act in God’s name, yet given exclusively to men. The Mormon priesthood is reserved for men, but some Mormon women say greater visibility in church life would go a long way toward gender equality.

At the same time, lots of Mormon women are perfectly comfortable with the roles they believe God assigned to them, including motherhood and nurturing. They would not want, they say, to “hold the priesthood.”

Now comes a third and, some suggest, growing group of Mormon women somewhere between these two poles.

They are not pushing for ordination, but they crave a more engaged and visible role for women in the Mormon church. It is a role, they believe, that their Mormon foremothers played — and one that could fit easily into the institutional structure without distorting or dismantling doctrine.

These women — some of whom consider themselves feminists, while others avoid that label — point to little changes that would pay big dividends: treating a president of the local Relief Society (the church's main women's group) like her male counterpart and assigning her to be a regular speaker at conferences and in worship services; quoting more women in sermons and Sunday school lessons; selecting more women to speak and pray at churchwide General Conferences.

Many of them agree that no meeting should take place in which decisions about women are made without a woman being present.

Talk about such changes is buzzing around the Mormon blogosphere and was discussed at a recent gathering of FAIR (the Foundation for Apologetic Information and Research). It has spawned websites such as Mormon Women Project and a blog called Young Mormon Feminists by a Brigham Young University student.

“There is a tremendous amount of pain among our women regarding how they can or cannot contribute to the governance of our ecclesiastical organization,” Neylan McBaine, founder of the Mormon Women Project, said at the FAIR conference. “We need to pay attention to that pain. … The pain is real.”

These LDS women, McBaine said, are not trying to “eradicate the divine differences between men and women,” but want to be “used, engaged, recognized and appreciated … in the broadest context of the Lord’s kingdom.”

If Mormonism’s first generation of strong and charismatic female leaders had seen this era, the modern women wonder, what would they think has happened to their legacy?

In the 19th century, many Mormon women had a strong sense of partnership within the priesthood. They were outspoken leaders of female organizations who oversaw their own finances, programs and publishing. They gave healing blessings to other women and their offspring. They spoke openly of women’s spiritual powers and being the offspring of heavenly parents — one of them God the Mother.

Mormon women were early suffragettes, forming alliances with national leaders such as Elizabeth Cady Stanton and Susan B. Anthony. They were the first in the nation to vote and among the trailblazers to pursue professional careers in medicine, business and law.

“I see articulate, spiritually aware, productive, loving and amazingly resilient women in my ward (congregation). Every Sunday I hear their voices, listen to their talks, learn from their lessons, mix with them in meetings and in the foyer, and see them doing amazing things,” said Laurel Thatcher Ulrich, who teaches history at Harvard University. “But, for some reason, we get only token acknowledgment of women beyond the ward.”

She has attended regional church conferences in which “men did all the talking (except occasionally for the wife of the mission president).”

This “strange, new phenomenon” of the disappearing women “is so at odds with my early experience in the church, my understanding of the gospel, and of what looks to me like simple common sense that I am simply stunned that it persists,” Ulrich said. “The sad thing is, many young women in the church have never experienced anything else.”

Kristine Haglund, editor of "Dialogue: A Journal of Mormon Thought," also worries about the impact on younger LDS women.

“We must articulate a Mormonism that is less about lifestyle choice and more about spiritual power and a personal relationship with God that can enlighten all the facets of the lives young women choose for themselves,” she said.

Women have become “the support staff for the real work of men,” added LDS activist and writer Chelsea Shields Strayer, “which means we are basically working with only 50 percent of our human capital.”

It is essential, Strayer said, "to open up new arenas for women to have stewardship, autonomy and trust their own revelation.”

That might help deal with some of the LDS church’s other gender issues, she said, such as the “inappropriateness of young girls confessing sexual sins to their male bishops, all-male disciplinary councils and the lack of women’s voices in religious text, curriculum and decision-making bodies.”

It is time, these women say, to expand opportunities and experiences available to Mormon women. But what about the church’s 1995 family proclamation, with its detailed descriptions of men as providers and women as nurturers?

Those who have “issues with the Proclamation on the Family deserve to be heard,” said Margaret Young, who teaches English at church-run Brigham Young University. “The role definition in that document troubles many women. Might that be a document which could use more female input and even a rewrite, since it has not yet been declared official revelation, nor (as far as I know) has yet had female input?”

Young says in her own moments of trouble, she turns to other women.

“I have lunch with other mothers who are meeting great challenges in their parenting, and we comfort and support one another,” she said. “I would like to feel that same sense in General Conference — and from a woman’s voice.”

Despite the lack of contemporary role models, Mormonism teaches that women have access to all the same revelatory and healing powers as men -- just with their own faith, not priesthood authority.

“Spiritual gifts, which have been a hallmark of this church from its very inception, are given equally to men and women,” said Bonnie Atkinson, a Mormon writer and blogger in Springville, Utah. “That’s the more crucial equality, the eternal equality that supersedes any secular definition of equality.”

Atkinson argues that LDS women are not taking advantage of powers they already possess.

Mormon women need to “step forward and embrace these gifts of the spirit, acknowledge the value of what they are already doing, and ask more of themselves,” Atkinson said. Then the outside world “will take notice of their articulateness, skills and worth. It won’t be because a policy or a program changed to bestow that power on them.”

Is female ordination, then, an unreasonable hope?

“My own view is that ordination to priesthood office is neither a necessary nor a sufficient condition,” Haglund said, “for making the kinds of changes that would allow women to participate fully in the life of the church.”

Other Mormon women see no possibility of equality without ordination.

Hannah Wheelwright, a BYU sophomore majoring in political science who launched the Young Mormon Feminists blog, said that with no significant Mormon female spiritual leaders, “I fail to see how women are equal. Female ordination is the only ultimate signal of equality.”

“For the last 90 years, everything has been channeled through the priesthood — all decision-making, rituals, everything that goes on in Mormon life,” Riess said. “Women are completely shut out from having input into decision-making that affects their lives and their families.”

Riess is reconciled to the idea that she doesn’t need the priesthood to enjoy the rituals, but is deeply troubled that “women are so systematically underutilized.”

She sees two paths forward: Women either get the priesthood or the priesthood is expanded to accommodate greater involvement and visibility for women. That large middle group seems to be pushing for the latter.