(RNS) A pack of lawmakers and Capitol Hill aides, including a nude congressman, took a booze-fueled, late-night swim in Israel’s Sea of Galilee last summer, Politico reported on Sunday (Aug. 19). Which raises at least one question: Is skinny-dipping at the biblical site sacrilegious?

“Conservative Christians, obviously, aren't for getting naked in public or drunk anywhere,” said Russell D. Moore, dean of the School of Theology at Southern Baptist Theological Seminary in Louisville, Ky.

“The location of the Sea of Galilee, however, doesn't make the story any more offensive to Christians than it is to the general public.” 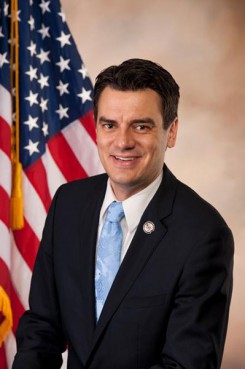 Rep. Kevin Yoder of Kansas, who skinny-dipped in Israel’s Sea of Galilee last summer, apologized for his “spontaneous and very brief dive,” which occurred during a congressional junket. The freshman GOP lawmaker is a Methodist, according to the Pew Forum on Religion & Public Life.

Rep. Kevin Yoder of Kansas, the skinny-dipper, apologized for his “spontaneous and very brief dive,” which occurred during a congressional junket. The freshman GOP lawmaker is a Methodist, according to the Pew Forum on Religion & Public Life.

Pundits pounced, saying that the incident could cost the GOP in this fall’s elections. Joe Scarborough of MSNBC’s “Morning Joe” said the story of Republicans “messing all over this holy site” will reverberate “from pew to pew, family to family, preacher to preacher,” especially within the GOP's conservative Christian base.

Still, most Christians likely see Yoder’s actions as immature — and a waste of taxpayer dollars — “but not as some intentional act of religious desecration,” Moore said.

When Christians travel to Israel, they often insist on visiting two places, said Todd Bolen, a co-author of the blog Bible Places and a veteran Holy Land tour guide: Jerusalem and the Sea of Galilee.

The pilgrims want to see and touch the water where Jesus performed some of his most memorable miracles. Christ recruited four of his apostles, walked on water, calmed a raging storm, and fed a multitude with five loaves and two fish on or near the Sea of Galilee, according to the New Testament.

A sign at a Catholic church at Tabgha, the purported site of the miracle of multiplication, declares that “this is holy ground,” said Bolen, who has taught biblical archaeology, history and geography in Israel. A view from the shore of the Sea of Galilee.

But the Sea of Galilee, which is really a lake, holds no religious significance for Israelis, most of whom are Jewish. In fact, it’s a source of drinking water and the site of watersports like sailing and jet skiing for tourists staying at  the resorts that line the coast. Even Christian tour groups often swim and take boat rides on Galilee. “I’ve water-skied on it,” Bolen said.

So, while the Sea of Galilee remains a significant site for Christians, it doesn’t demand the same reverence as Calvary, where Christ was crucified, or the Via Dolorosa.

Now, if congressmen start skinny-dipping in the Jordan River where Jesus was baptized, they might have a blasphemy problem, Bolen said.