WASHINGTON (RNS) Spike Lee is not about to give up filmmaking but – at least for a moment or two – he sounded a bit like an expert on the challenges facing the church as he promoted his new movie “Red Hook Summer.”

“Any church whose members are senior citizens and there’s no youth coming behind, they’re going to die out,” Lee said in a roundtable discussion with reporters.

“Now that goes for synagogues, mosques, temples too — any institution,” Lee continued. “You got to always try to have that infusion of youth. They might not be as smart but youth has energy.”

“Red Hook Summer” opens Friday (Aug. 24) in cities such as Washington, Chicago, Atlanta and Los Angeles. The movie’s main character echoes Lee's call to get young people to church, but he also has a particular drive to evangelize his grandson, who traveled from suburban Atlanta to spend the summer in the struggling Red Hook neighborhood of Brooklyn, N.Y. 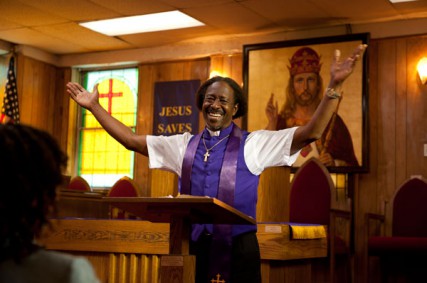 “The good Bishop Enoch Rouse is trying to rally his flock, his congregation, in this cruel and harsh world,” said Spike Lee of the character played by actor Clarke Peters in Lee's film “Red Hook Summer”.

“The good Bishop Enoch Rouse is trying to rally his flock, his congregation, in this cruel and harsh world,” said Lee of the character played by actor Clarke Peters. “He’s finally getting a chance to meet his grandson. They never set eyes on each other before and he’s desperately trying to get him to accept God.”

But Flik Royale, the iPad-toting grandson, goes to the Little Piece of Heaven Baptist Church “kicking and screaming,” said Lee.

“You embarrass me,” Royale, played by Jules Brown, told Rouse, a character who eventually is revealed to have a secret past. Spike Lee sits on the set of his film “Red Hook Summer” with actors Toni Lysaith and Jules Brown.

“You need Jesus in your life, son,” his grandfather responds.

For his part, Lee wasn’t raised a churchgoer but he says he’s not totally unfamiliar with the black church, having visited congregations such as New York’s Abyssinian Baptist Church.

He and McBride capture the vibrant worship – rollicking organ, tambourine playing and clapping congregation – at the services of the small Baptist church. And they also reflect the practice in some black churches of adorning the walls with images of a white Jesus.

Is Lee for or against that depiction?

“Can I go scriptural on you?” asked Lee. “Jesus wept.”

Lee and his siblings competed to recite the short Bible verse when asked for one during childhood visits to their Southern grandparents. 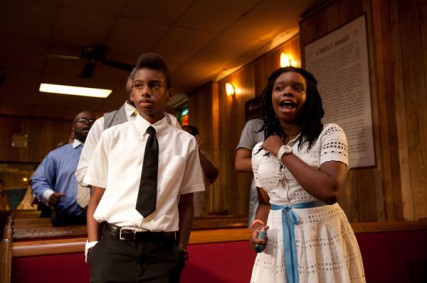 “Me and my brothers would fight for that one,” he said. “Jesus wept – two words. Can’t go wrong with that, right?”

There are aspects of some real-life churches that clearly disturb Lee, especially prosperity gospel ministers in “25,000-seat arenas’’ passing around “garbage cans” instead of offering plates.

“The politics of give me your money and I’ll put it in my pocket,” he said. “I’m going to be honest: I’m not a fan of this prosperity. Not having it.”

But he quickly adds: “I’m not saying I don’t love Jesus.”