HUNTSVILLE, Ala. (RNS) For John Mahony, a retired U.S. Army colonel who was managing projects for Blue Cross/Blue Shield, instinct came before analysis as he fought to stay on his feet the morning of Sept. 11, 2001.

“The building jerked hard, throwing everyone off balance,” remembers Mahony in the account he has written of surviving the 9/11 attacks. 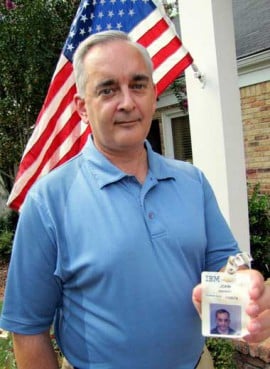 For John Mahony, a retired U.S. Army colonel who was managing projects for Blue Cross/Blue Shield, instinct came before analysis as he fought to stay on his feet the morning of Sept. 11, 2001. *This photo is not available for print.

Mahony was working on the 19th floor of the North Tower of the World Trade Center that morning.

“My support was gone, and I had to catch my balance to remain on my feet.”

Mahony had lived in California. “Earthquake,” he thought, even as his military training diagnosed “bomb.”

Mahony directed his co-workers to a stairway, checked the area for anyone else, and headed down through what was quickly a haze of smoke and dust.

This was when his daily habit of saying the Lord’s Prayer bobbed to the surface of his mind, providing a grillwork of stability in the midst of the writhing building.

“As I stepped into that smoky stairway, the Lord’s Prayer ran through my mind; over and over and over: ‘Thy will be done.’ At first, I could only get through part of the prayer. But after a few floors, prayer relaxed me and I was able to say it completely.”

On what will always be the worst day of his life, Mahony also saw great generosity and courage around him.

“For everyone who was having a hard time with hysterics, there were three or four who went out of their way to offer an arm, an encouraging word or a prayer.”

Mahony has found that most people who ask him about that day keep wanting to find out about the tragedy, the chaos of it all. But his most enduring memory comes from the other side of that day.

With hundreds of others, Mahony and his office mates trudged downstairs through the smoky air, grateful that the lights and ventilation remained on.

When the fire sprinklers came on, they grabbed the handrails to keep from being swept off their feet from the waterfalls that ran down the steps.

But out of the chaos, to the rhythm of the Lord’s Prayer, Mahony sensed something that reminded him of when his mother would wrap him up as he’d climb out of a cold swimming pool, and he would be held, safe and warm, in loving arms.

“As I walked down that stair, somewhere between the 12th floor and the 10th, somewhere between ‘Our Father’ and ‘Thy will be done,’ that same feeling came over me. Suddenly, I was wrapped in warmth, and love, and comfort. In that smoky, wet stairway, in a burning building, surrounded by a thousand frightened people; I felt wonder. I felt God’s peace, and I knew that regardless of the physical outcome, everything would be all right.”

The group came out into a smashed lobby, service elevator shafts open and filled with rubble.

A firefighter directed him to a side door, saying that he couldn’t go out the front; people were jumping.

“I moved through the rubble of the lobby vaguely registering impressions of a woman receiving oxygen, a heavyset woman crying as she was carried over the back of a co-worker, another who was so badly burned that I could not tell the original color of her skin.”

Outside, he ran through a scene, he said, from a post-apocalyptic movie: cars on fire, chunks of metal and glass in the street, lots of shoes. He had just crossed the street to the far side when the sound of jet engines made him look up. The second jet collided with the second tower.

“At first it didn’t look real. The building seemed to absorb the jet as if it were some macabre magic trick. Then the glass wall rippled and glass and jet fuel exploded outward and spilled down the side of the building.”

Only after he had run a few blocks, getting away from the debris, did he turn to look again.

“The dawning realization that a pilot could abandon those in his care and intentionally fly into a building suddenly hit me. It made me sick.”

So did the hundreds of bodies falling through the air because people above the crash chose to jump.

“Each new descending body emphasized how terrible the conditions were on the upper floors.”

Then the first tower collapsed, sending a billow of ash out that seemed to embody evil.

“I try not to ascribe human emotion to inanimate things, but the debris cloud seemed malevolent. It roiled with greenish brown smoky shadows deep within the white dust. And it was fast. It was warm, not as hot as a sauna, but close. It itched. Thousands of cement particles whose edges had not yet worn smooth went into my nose, eyes, and ears and down my shirt.”

Mahony was trapped on the south side of the building, the tip of Manhattan at Battery Park. All he could do was watch and pray.

“My prayers continued, but now with a difference. For the most part, I stayed with the Lord’s Prayer, but Jesus seemed so close, that I added specific prayers for those we passed. There was the overwhelming sense of the physical presence of Jesus. He was radiating that sense of love, compassion, and peace that I was feeling.”

Despite the horror of that day, Mahony reached a deeper sense of the suffering, abiding compassion of Jesus, of the durability of the peace of God in the midst of death and destruction.

It was only later that Mahony learned that the smoke he inhaled in the six hours before he managed to leave the area would leave him with health issues that will shorten his own life. In the years since the attacks, he realized he was also left with insights that have enriched every day of his life since the attacks.

“When I walked from those ruined towers, I took two priceless gifts with me. First, I carry God’s peace with me every day. Even if I get distracted, Christ’s love is all around us. It takes just a few lines from a simple prayer for it to wrap itself around me once again.

“Second, I know, with a certainty that my words cannot possibly convey, I know what will happen to me when I die. I will rise from this shell, like a child fresh and clean from a bath, and I will be wrapped in the warmth of His love and His forgiveness and His peace.”

(Kay Campbell writes for The Huntsville Times in Huntsville, Ala.)