VATICAN CITY (RNS) Pope Benedict XVI embarks Friday (Sept. 14) on a high-risk trip to Lebanon, as the country's stability is threatened by spillover from the conflict in neighboring Syria. 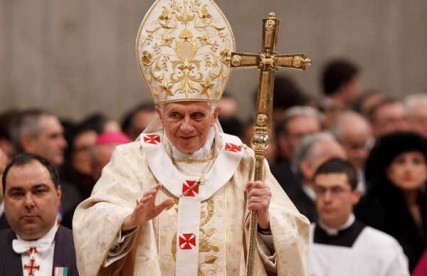 The three-day visit is also the pope's first foray into the Middle East after the Arab Spring, giving him the opportunity to reassure the region's Christian minorities who fear the recent rise to power of Islamist leaders in the region.

“My apostolic voyage in Lebanon, and by extension in the Middle East in its entirety, comes under the sign of peace,'' Benedict said Sunday during the Angelus prayer at his summer residence in Castel Gandolfo. Despite the “dramatic situation” of a region torn by “incessant conflict,” people “shouldn't resign themselves to violence or worsening tensions,” he added.

Officially, Benedict travels to Lebanon to hand over “Ecclesia in Medio Oriente,” the final document of a 2010 meeting of Middle East bishops at the Vatican.

But the conflict in Syria – between Sunni-led rebels and the regime of President Bashar al-Assad, a member of the minority Alawite faith with links to Shiite Islam – will loom large over the trip.

In recent weeks sectarian clashes between Alawites and Sunnis broke out in the northern Lebanese town of Tripoli, threatening the country's fragile equilibrium among religious groups.

Lebanon has the Middle East's largest Christian community, numbering around 4 million people — 40 percent of the majority-Muslim population — though the situation is made more complex by the fact that both Christian and Muslim communities are further divided into sects.

“There's never been a (papal) trip in such a dramatic situation,” said the Rev. Paolo Dall'Oglio, a Catholic priest recently expelled from Syria after three decades in the country for his support of the rebels.

The Vatican spokesman, the Rev. Federico Lombardi, attempted to dispel fears that the trip might be canceled. But Lombardi admitted that the decision to go ahead with the Lebanon trip despite growing tensions is “an act of great courage” for the 85-year old pontiff.

Lebanese authorities reassured the Vatican that security will be tight during the trip, which they hope will highlight Lebanon's example of Christian-Muslim cooperation in a region where such agreements are rare. Lebanese political and religious factions have announced a warm welcome for Benedict, including Hezbollah, the Islamist party and militia that is labeled a terrorist organization by the United States. Hezbollah's leader, Sayyed Hasan Nasrallah, called the pope's visit “historic.”

Najib Mikati, the head of the Hezbollah-backed Lebanese government, even declared Sept. 15, the central day of Benedict's visit, a national holiday.

But tensions that threaten Lebanon's fragile fabric “have only been frozen, not resolved,” warned the Rev. Jean Azzam of Beirut's Redemptoris Mater Seminary, and the conflict in Syria has deepened those tensions.

During his stay, Benedict will have to walk a diplomatic line between calls for a military intervention to topple Assad and the position of Syria's Christian communities, who have enjoyed religious freedom under his regime and fear persecution should he be removed.

On Friday, the Rev. Miguel Angel Ayuso Guixot, a senior Vatican official, spelled out the Holy See's official policy on Syria at an international conference in Istanbul. He called for an immediate end to violence, urged Assad's government to respond to the “legitimate aspirations of the Syrian people” through dialogue and asked the international community to “dedicate itself to a process of peace in Syria.”

“The pope will speak in general terms on Syria,” said Dall'Oglio, but he “will appeal to those in power to respect human rights.”

The leader of Lebanon's largest Christian group, Maronite Patriarch Bishara Rai, came under fire in past months for voicing support for Assad, though he has since softened his stance.

In Lebanon, Benedict will also have the opportunity to take stock of the changes brought to the Middle East by the Arab Spring.

Post-revolution elections in Egypt, Libya and Tunisia have brought Islamist parties to power. This has further fueled the fears of Christian communities in the region, who suffered several episodes of violence in the instability that followed the fall of the old regimes.

Though the Vatican in general supported democratic reforms, it has also stressed the need to defend the rights of minority groups, including Christians, in those Muslim-majority countries.

Guixot said Christians in the Arab world are “ready to play their part” alongside Muslims in the effort to “build societies that respect the human rights of all citizens.”