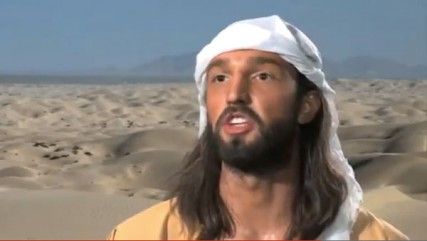 An actor portrays Muhammad in the trailer for the film “Innocence of Muslims” on www.youtube.com.

(RNS) When inflamed mobs stormed the U.S. embassies in Libya and Egypt on Tuesday (Sept. 11), the media quickly looked to a likely spark. 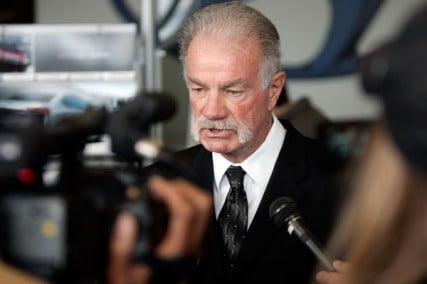 But in the days before the protests, Jones made no public mention of the film – called “Innocence of Muslims” – even as he prepared to stage an “International Judge Muhammad Day” on Sept. 11.

Instead, the man who translated the film into Arabic, sent it to Egyptian journalists, promoted it on his website and posted it on social media was an obscure Egyptian-born Coptic Christian who lives near Washington and proudly touts his ties to Jones.

Morris Sadek describes himself as a human rights attorney and president of a small group called the National American Coptic Assembly, based in Chantilly, Va. Sadek's online biography says that he is a member of the Egyptian and District of Columbia bar associations. It also says that has “defended major human rights cases” including the late Coptic Pope Shenouda III, who died in March.

But fellow Copts depict Sadek as a fringe figure and publicity hound whose Islamophobic invectives disrupt Copts’ quest for equal rights in Egypt. Images from the film trailer for “Innocence of Muslims” on www.youtube.com.

“Mr. Sadek is a maverick who belongs to a very narrow extreme current of Coptic activists,” said the Washington-based group Coptic Solidarity. “He likes to use inflammatory and abrasive language to insult Muslims and Islam. As his actions agitate more the Islamic extremists, some people wonder if he is not in fact working to fulfill their agenda.”

Sadek “has done a lot of harmful things for Copts in Egypt,” said Cynthia Farahat, Coptic Solidarity's director of advocacy. “Every single thing he says is used by Islamists to justify terrorism against Copts.”

According to the Egyptian Independent newspaper, Sadek was banned from entering Egypt and had his citizenship revoked in May 2011 because he called for war against the country.

As protests against the anti-Muslim film spread throughout the world, Palestinians shredded posters of Sadek and Egyptians chanted his name, according to international reports. While the Egyptian protests appear to have been incited by the film, the Obama administration is investigating the possibility that al-Qaida plotted the Libyan attack to mark the anniversary of 9/11.

Sadek’s Facebook account and Twitter feed are rife with anti-Islamic sentiments, as is his website, where he is described in one media report as “ignorant” and “crazy.” A YouTube video dated to 2010 shows the 69-year-old wearing a cowboy hat and waving an American flag and gold crucifix while shouting “Islam is evil!” outside the National Press Building in Washington. A photo on his website shows Sadek with Jones, whom he calls a “Bible hero,” at a small protest outside the White House.

On Sept. 6, Sadek emailed journalists around the world, promoting Jones’ anti-Islamic event and including footage of “Innocence of Muslims,” according to The Wall Street Journal. A conservative TV host in Egypt broadcast the video on Sept. 8, sparking protests at the U.S. embassy in Cairo.

“I really think Morris just wanted to get famous in the Egyptian media,” said Michael Meunier, president of the Washington-based U.S. Copts Association.

Sadek has said that he hyped the film to highlight the plight of Christians in Egypt.

“I am only (leading) a Coptic organization that promoted the film. I am only interested in the first part about persecution of Copts,” he told Reuters. The trailer’s first minutes show Egyptian police standing idle as a Christian medical clinic is ransacked by bearded marauders.

Details about the film’s makers remain sketchy, but the AP reports that Nakoula Basseley Nakoula, a 55-year-old Coptic Christian who lives in Southern California, said he managed logistics for the company that produced it. Nakoula also told the AP that he is concerned about Muslims’ treatment of Coptic Christians.

According to the State Department, Egypt’s 7 million Copts — about 10 percent of the population — face frequent personal and group discrimination. They have been barred from building churches and applying for government jobs, among other restrictions.

Tensions between Christians and Muslims have been mounting since the Arab Spring. A bomb attack in January 2011 at the Coptic Orthodox Church of the Two Saints in Alexandria killed 22 and injured 96. In late 2010, a riot that began over a church-building led to the death of two Copts, reportedly by security forces, according to the State Department. “The government failed to prosecute perpetrators of violence against Coptic Christians in a number of cases,” the State Department said in a report last September.

Fears have intensified since the Islamist Muslim Brotherhood won power in June.

Sadek’s promotion of the anti-Islam film may backfire against Copts, Meunier said. Last month, a Copt teacher was arrested for insulting Islam and some Copts fear a blasphemy law will be inserted into Egypt's constutition.

“These activities are being used now for political gains by the Islamists because they are trying to rally their supporters to vote for the constitution they are drafting,” Meunier said. “They also stated that they will have to put safeguards in the new constitution against similar insults in Egypt. What they mean is that we are going to put even more articles to curb freedom in the new constitution.”

Sadek told Reuters that he felt sorry about the deaths in Libya, where four Americans, including Ambassador J. Christopher Stevens, were killed. He did not respond to requests for comment from Religion News Service.

Brent McBurney, president of Advocates International, a human rights firm in Washington, said Sadek volunteered on cases involving persecuted Copts in Egypt from 1999-2000. “But as his views became more and more askew we disaffiliated ourselves from him,” McBurney said.

General story
Poet Cavafy remains an unlikely symbol of Greek culture in Egypt
Follow us on Facebook!
Submit your photos to RNS