(RNS) A series of recent developments are renewing questions about the Catholic bishops' alignment with the Republican Party, with much of the attention focusing on comments by Philadelphia Archbishop Charles Chaput, who said he “certainly can’t vote for somebody who’s either pro-choice or pro-abortion.” 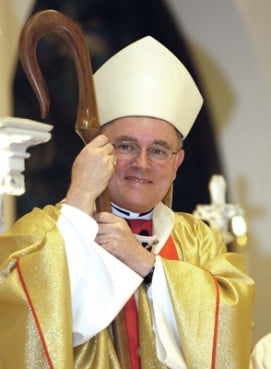 A series of recent developments are renewing questions about the Catholic bishops’ alignment with the Republican Party, with much of the attention focusing on comments by Philadelphia Archbishop Charles Chaput, who said he ?certainly can?t vote for somebody who?s either pro-choice or pro-abortion.?

In a wide-ranging interview published last week (Sept. 14), Chaput also echoed the views of a number of prominent bishops when he praised Republican vice presidential nominee Paul Ryan for trying to address the “immoral” practice of deficit spending through his libertarian-inflected budget proposals.

“Jesus tells us very clearly that if we don’t help the poor, we’re going to go to hell. Period. There’s just no doubt about it,” Chaput told National Catholic Reporter.

Chaput stressed that he is a registered independent “because I don’t think the church should be identified with one party or another.” But he said that the Democratic Party’s positions on abortion rights, gay rights, and religious freedom “cause me a great deal of uneasiness.”

He added that economic issues are “prudential judgments” open to a variety of legitimate approaches. Abortion, on the other hand, is “intrinsically evil” and must always be opposed.

That is a talking point voiced by many Catholic conservatives, including Ryan himself. Last Friday, Ryan told the Christian Broadcasting Network that opposition to abortion and same-sex marriage, and support for religious freedom, are all “non-negotiables” for a Catholic politician while “on other issues, of economics and such like that, that’s a matter of prudential judgment.”

The debate over Catholic social teaching has become an unanticipated focus of the presidential contest, and has exposed growing divisions within the church.

Bishops like New York Cardinal Timothy Dolan, president of the U.S. Conference of Catholic Bishops, have voiced support and sympathy for Ryan – a disciple of the late philosopher and atheist Ayn Rand, the patron saint of modern libertarianism.

Many church experts say Ryan's views stand in contrast to traditional Catholic teaching on social justice, and Ryan’s policies have been the target of sharply critical statements from politically active nuns and the hierarchy’s own committee that deals with poverty and domestic issues.

But the dynamic within the USCCB appeared to shift even further to the right on Monday with the announcement that bishops had hired the head of Catholic Charities in Denver, Jonathan Reyes, as the new head of the bishops’ Department of Justice, Peace and Human Development – in effect their chief lobbyist on domestic and international social justice issues.

The appointment was being closely watched because it is a critical post in trying to influence Congress on anti-poverty legislation.

The previous head of that office was John Carr, a widely respected social justice advocate who left the job last month after almost 25 years. Carr had come under increasingly sharp attack by the Catholic right for pushing church positions that did not always line up with conservative policies.

Liberals noted that not only was Reyes a longtime collaborator with Chaput before the archbishop was transferred from Denver to Philadelphia last year, but he has deep ties to conservative church activists and to institutions like Christendom College in Virginia. In addition, Reyes appears to lack the Washington experience that would be important in an era expected to focus on budget battles over entitlement programs.

“It is unclear from Mr. Reyes’ resume that he knows which Metro stop to get off at Capitol Hill, let alone which doors to knock on,” Michael Sean Winters wrote at National Catholic Reporter.

Signs of the Times
Workers deserve a living wage, not just a minimum wage