BOSTON (RNS) At 3:30 a.m. on a Sunday morning, nine Muslim parents anxiously watched the clock at an International House of Pancakes restaurant. The 24-hour diner was packed with young partygoers and Muslims there for suhur, the pre-dawn breakfast that Muslims consume before starting their daily fasts during the Islamic month of Ramadan. 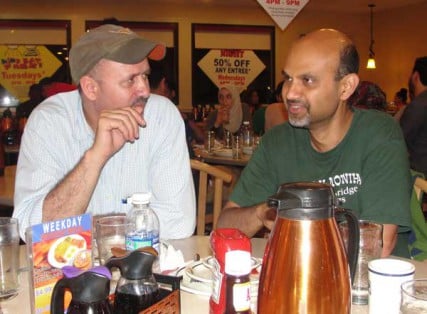 Fathers Amr Ragy (left) and Mohamad Ali both go the Islamic Center of Boston in Wayland, Mass. They are pictured here having a Ramadan breakfast with their children at the International House of Pancakes.

The daylong fast was scheduled to begin at 4:12 a.m. and last until sunset, almost 16 hours later.

“We have 40 minutes to order our food, have it cooked, and eat it,” said Muneeb Khan, glancing at a neighboring table where his son Eamon and nine other kids were seated.

A waiter arrived a few minutes later and took orders: chocolate chip pancakes, omelets, French toast filled with sweet cream, chocolate milk and Splashberry drinks. Almost all of it was gone by 4:11.

“You still get the flavor of international traditions, but we mostly integrate them with American culture,” said Mohamad Ali, who came to the Boston area at age 11 from Guyana in 1981, and now brings his own 11-year-old son to IHOP.

An active member of the Islamic Center of Boston in Wayland, Mass., Ali has been taking his kids to the weekly IHOP gatherings for the last six years. “We always look forward to it, every week.” 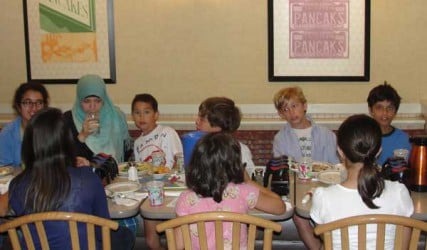 Muslim immigrants frequently worry whether their children will be able to maintain their Islamic identity in a country reputed to be rampant with vice and promiscuity. The group of kids pictured attend the Islamic Center of Boston in Wayland, Mass. and are having a Ramadan breakfast at the International House of Pancakes.

Muslim immigrants to America frequently worry whether their children will be able to maintain their Islamic identity in a country with a reputation for rampant vice and promiscuity. Many respond by limiting their children’s social contacts to school, family, and mosque.

But that approach can backfire, some Muslim family experts say. While they advise parents to help their children make Muslim friends, they also say Muslim kids can — and should — fully participate in American culture without compromising their Islamic values.

Both she and her husband were practicing Muslims and well-educated, and wanted the same for their children. She became involved in the international clubs at the universities where her husband worked – cooking for potlucks, manning information booths and presenting about Islam at churches, community centers, and her children’s schools.

“We were a little apprehensive about what life would be like in America,” Husain acknowledged. “But it worked out. People were pretty respectful, and those things we did helped the children keep an awareness of their values and religion.”

“The girls love it. They get to stay up late, they watched the Olympics, they talk. We fix them breakfast and then they go to sleep. When they wake up, they’re happy,” said Husain Baloch, who doesn’t allow her younger daughter to sleep over at other homes. “When we can’t let our kids do whatever they want, we have to create our own opportunities.”

Like her mother, Husain Baloch has talked about Islam at her kids’ schools, and has read “Ramadan,” a children’s book by Muslim-American author Suhaib Ghazi, to their classes.

“That made it (Ramadan) feel like it was something special,” said her daughter, Sidrah Baloch, 19, now a student at Wellesley College.

Not all new traditions endure. Kausar Qidwai thought it would be more fun on Eid al-Fitr, the holiday celebrated after Ramadan, to give their children gift-wrapped presents instead of money like they do in their native Pakistan. But her husband didn’t like the idea, and after a couple of years the family went back to cash gifts.

With its restrictions on dating, alcohol and attire, Islam can seem stifling to some young Muslims, a feeling compounded by some parents who see the outside world as a gateway to vice. That leads some Muslim immigrants to limit their children’s non-Muslim social contacts.

“Many of them just keep their children inside, only within the community,” said Ayfer Abed Aljabar, who founded the Iraqi American Community Center last year in Lowell, Mass.

“When Muslim kids look at American kids, they often feel like they are being deprived,” said Dr. Othman Mohammad, a volunteer youth coordinator at the Islamic Center of New England in Quincy, Mass. Yet excessive curbs on children’s social lives can lead to duplicity and secrecy, said Mohammad, adding that many Muslim kids talk about having an “at-home personality” and “at-school personality.”

Suzy Ismail, curriculum developer at the Center for Muslim Life in New Brunswick, N.J., worries that many Muslim immigrant parents also isolate themselves within the local community, often because they feel intimidated by the new environment.

“When we don’t mingle with others, we don’t hear what goes on in school from other kids’ parents. And because we’re still often seen as the other, people hesitate to include us in these talks,” said Ismail.

Aljabar, who fled Iraq in 2007 with her husband and three young daughters, now 10, 8, and 5, encourages her daughters to get involved with school activities and get together with friends.

“The other day they went to a pool party and had so much fun,” she said. “If I don’t feel like I can give them their freedom, why am I living here? That’s part of this society. You’re not going to stop them. But parents have to teach them, and prepare them,” Aljabar said.

(This story was made possible by a fellowship from the French-American Foundation—United States as part of the Immigration Journalism Fellowship.)