(RNS) Mitt Romney angered evangelicals during his first White House run in 2008 by blurring the theological lines between their faith and his Mormonism. Lurching in the other direction, he irked them again by rarely mentioning religion during this year’s GOP primaries. 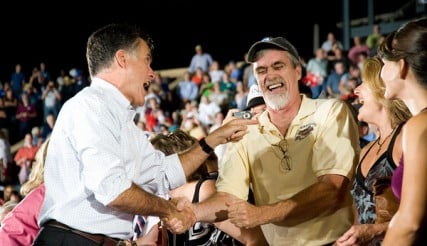 Mitt Romney shares a laugh with supporters at a rally in Nashua, NH. Romney has finally found a religious middle ground, evangelical leaders say, by sidelining Mormon theology and stressing the ?Judeo-Christian values? that he shares with social conservatives.

But Romney has finally found middle ground, evangelical leaders say, by sidelining theology and stressing the “Judeo-Christian values” that he shares with social conservatives.

“He’s made it very clear not to gloss over the theological differences that his faith has with evangelicals,” said Tony Perkins, president of the conservative Family Research Council in Washington. “As long as he talks about the shared values of our religious traditions, I think he’s good.”

Romney did exactly that during a Sept. 9 “Meet the Press” interview, saying that religion inspired him to run for president — without mentioning the word “Mormon.”

“The Judeo-Christian ethics that I was brought up with — the sense of obligation to one’s fellow man, an absolute conviction that we are all sons and daughters of the same God and therefore in a human family — is one of the reasons I am doing what I’m doing,” he said.

Conservative Christian leaders are taking the same approach, urging evangelicals to focus on Romney’s policies and principles, not the particulars of his faith.

The GOP platform, including opposition to abortion and gay marriage, fits “squarely within the Judeo-Christian tradition,” more than two dozen Christian notables wrote in a Sept. 7 public letter congratulating Romney on the document. The signers included activist Ralph Reed, evangelist Franklin Graham and Focus on the Family President Jim Daly.

Romney’s standing among evangelicals has risen since the summer, according to a recent Pew Research Center poll, with 74 percent now saying they support him. Trailing in national polls, the GOP nominee is counting on a huge turnout from social conservatives, especially in swing states like Colorado, North Carolina and Virginia.

“It captures a common core set of values without getting tangled up in religious doctrine or theology,” DeMoss said.

The “Judeo-Christian” phrase first gained currency in the United States during the 1930s, when American Christians sought to distinguish themselves from the fascist and frequently anti-Semitic Christian groups emerging across Europe.

With the modern rise of the religious right in the United States, honoring the country’s “Judeo-Christian” heritage became a battle cry for culture warriors who fought to keep 10 Commandments in courthouses and sectarian prayers in public schools.

Just as the phrase allowed Catholics, Protestants and Jews to soft-pedal theological differences in favor of shared political causes, Romney and evangelical leaders are hoping to expand the big tent again, this time to embrace Mormons.

While many Mormons agree with conservative Christians on matters of public morality, the “Judeo-Christian” rhetoric is rarely mentioned within the Church of Jesus Christ of Latter-day Saints, said Patrick Mason, chair of Mormon studies at Claremont Graduate University in California.

“It's not heard all that often in the halls of a Mormon ward,” said Mason. “I suspect that he’s picking up cues from outside his Mormonism.”

But Mason noted that “Judeo-Christian” phrase's implicit nostalgia for a pre-1960s America — before the rise of religious pluralism and church-state lawsuits — resonates with many Mormons.

For instance, Romney wrote in his 2010 book “No Apology” that Americans’ “respect for life” is “the product of our Judeo-Christian heritage, which teaches that we are created in the image of God.”

Romney also argued that “our Judeo-Christian heritage” is “central to America’s rise to global leadership” in a May commencement speech at Liberty University. But he also noted that his Mormonism and the graduates’ evangelicalism are “different faiths.”

The admission was a theological step back from Romney’s first White House run, when he tried to woo evangelicals by portraying himself as one of them, said John-Charles Duffy, a scholar at Miami University in Ohio.

“He spoke of Jesus as his 'personal savior,’ an expression more characteristically evangelical than Mormon,” Duffy wrote recently in the online journal Religion & Politics. “He professed his faith in the Bible as 'the word of God' without mentioning the Book of Mormon.”

As Duffy notes, the move backfired.

“When he goes around and says 'Jesus Christ is my Lord and savior,' he ticks off at least half the evangelicals,” Richard Land, the former head of the public policy arm of the Southern Baptist Convention, said back in 2007.

On the other hand, Judeo-Christian rhetoric suits evangelicals, said Perkins. “It’s less of a religious denomination or sect, than a description of our past history and heritage. You don’t have to be a born-again Christian to fall into that category.”

But some evangelicals remain reluctant to label Mormonism “Judeo-Christian.” Land, for example, calls Mormonism “the fourth Abrahamic religion” after Judaism, Christianity and Islam, all of which trace their roots to the Hebrew patriarch.

“The real problem is that Mormonism is evolving. It’s hard to pin down,” said Witherington. He noted that the church renounced polygamy in the 1890s and opened its priesthood to blacks in 1978.

“It’s very hard to know what Romney means by 'Judeo-Christian values,’” Witherington said. “I have to be agnostic about it until he spells it out.”