QUINCY, Mass. (RNS) Sayed Mohammad Jawad Al-Qazwini was 12 years old when his family fled Iran and settled in Los Angeles. Now 28, he sat with some 70 Shiite Muslims at the Iman Islamic Center on a recent Friday night, preaching about the Mosque of the Trash Picker in Iran, and a Turkish mosque peculiarly named “As if I have eaten.” 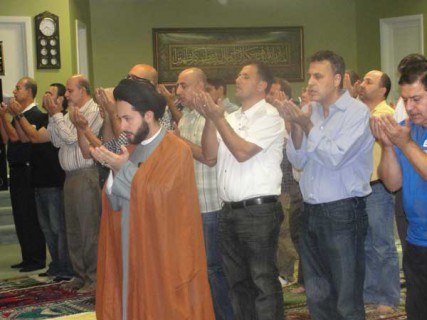 Al-Qazwini, a descendant of Islam's Prophet Muhammad, soon veered into a theme he had raised before on his two-week visit to the center: the discrimination and violence that Shiite Muslims have suffered at the hands of Sunni Muslims.

“Some Muslims don't like other Muslims praying on the rock,” Al-Qazwini said, referring to a biscuit-sized stone or piece of dried mud that Shiites place their foreheads on when prostrating during prayer. Sunnis do not use this stone, and some believe it goes against Islamic tradition, and is even heresy.

“It's happened to me at least 50 times in Saudi Arabia. They see the rock, they take it away and say that it's shirk, polytheism,” Al-Qazwini declared, eliciting gasps from his audience.

The variation in the proper way to pray is one among several differences that exist between Shiites, who make up about 15 percent of Muslims globally and in America, and the majority of Sunnis. Until recently, those differences mattered little in the United States, where the two groups bonded as Muslim minorities and prayed in the same mosques.

“There weren't enough of either to justify the cost of building sectarian mosques, and because in general, early generation immigrants were less focused on establishing formal houses of worship,” said Andrea Stanton, a religious studies professor at the University of Denver.

That is changing, however, as American Shiites are increasingly establishing their own mosques. According to “The American Mosque 2011,” a survey sponsored by several Muslim American organizations, 7 percent of roughly 2,100 mosques in America are Shiite, and most have been built in the last 20 years.

One reason: Shiites have become numerous and financially strong enough to manage the expensive process of buying or building their own mosques. Another factor: the growth in Shiite populations as immigrants flee persecution in Iraq, Bahrain, Saudi Arabia, Afghanistan, and Pakistan, where Taliban gunmen recently executed at least 22 Shiite bus passengers.

Many Shiite Muslims say that while American mosques profess to be open to any and all Muslims, they tend to be Sunni in practice and can be hostile to Shiite beliefs and practices.

In some ways, the Sunni/Shiite divide is similar to divisions between Protestants and Catholics — both follow the same faith, but with different ways of understanding and worshipping God.

The differences between Sunnis and Shiites are historic and theological. After Muhammad died in 632 A.D., some Muslims believed he should be succeeded by his male relatives, beginning with his cousin and son-in-law, Ali. They became the Shiites. Others supported the prophet's closest companions; they became the Sunnis.

The disagreement led to a series of civil wars beginning in 656 and that climaxed in 680 at the Battle of Karbala, in Iraq, where Sunnis routed Shiites and killed Muhammad's grandson, Hussein. The city is sacred to Shiites, and the mosque where Hussein is buried is led by Al-Qazwini's grandfather.

For Shiites, paying reverence to Muhammad's descendants by visiting their graves or observing their birthdays is a deeply ingrained act of devotion. Sunnis, on the other hand, have a more casual historic interest. The Wahhabis, the puritanical Sunni sect that controls Saudi Arabia and Islam's holiest sites, see such reverence as heretical, and have razed many important Islamic sites, including the home where Muhammad grew up, and the Medina grave of his grandson Hasan.

The two sects use different sets of hadith, or stories related to Muhammad, and also pray slightly differently.

Shiite immigrants started coming to the U.S. in the 1870s, along with Sunni and Christian immigrants, from modern-day Syria, Lebanon, and Palestine. Following Iraq's war with Shiite Iran, Saddam Hussein started persecuting Shiites, triggering another wave of Shiite immigrants.

“They came here as refugees because they could not practice their religion,” said Muthanna Waili, whose family was expelled from Kuwait in 1985 and who helped establish the Iman Islamic Center in 2006.

Some worry that anti-Shiite sentiment has intensified in parts of the Muslim world. According to an August report from the Pew Forum on Religion and Public Life, more than half of Muslims in Egypt and Morocco say Shiites are not Muslims; in Jordan, Tunisia, and the Palestinian territories, that figure is more than 40 percent.

In Saudi Arabia, the State Department report said, “The Shia minority continued to suffer social, legal, economic, and political discrimination,” and accused the government there of arresting Shiite religious leaders. Other Shiites report that many mosques in Saudi Arabia and other countries lace their sermons with anti-Shiite rhetoric.

While American mosques once offered a reliable refuge from this persecution, Shiite immigrants who have come more recently have found some mosques unwelcoming to their creed.

“They couldn't find mosques that would let them pray the way they wanted to pray,” said Waili, 39. “I've personally had people label me as a kafir, an infidel. People look at you like you're trying to change the traditional way.”

Waili said that while he had good personal relations with leaders of two nearby Sunni mosques, his efforts to foster closer relationships have been ignored or rejected. Before the Quincy mosque was finished, Waili said he asked a mosque in nearby Sharon, Mass., if his community could hold an observance there. It was rejected, he said, because he was told that some members of the community would object.

Rashid Noor, president of the Islamic Center of New England, which runs the Sharon mosque, said he was unaware of hostility toward Shiites. “I don't think we have anyone here like that. We haven't talked about these things,” said Noor.

Despite the divisions, Shiite leaders say they still hope to improve relations with Sunnis. “We're good at interfaith work but not intra-faith work,” said Al-Qazwini. “The most important thing is to educate the entire Muslim community about the different sects of Islam.”

Other challenges may have to come first, however. As their numbers grow, Shiites are increasingly divided themselves, often according to the different religious scholars they follow overseas. Not long after the Shiite center in Quincy was founded, some of the more conservative members objected that males and females were not segregated, and founded yet another center in Boston.

“We're also struggling with internal separation,” said Waili. “The center started very strong, but it has slowed down because of the friction within the community.”

(This story was made possible by a fellowship from the French-American Foundation-United States as part of the Immigration Journalism Fellowship.)