BETHESDA, Md. (RNS) The number of Americans who say they have no religious affiliation has hit an all-time high — about one in five American adults —  according to a new study released Tuesday (Oct. 9) by the Pew Forum on Religion & Public Life. The number of Americans who say they have no religious affiliation has hit an all-time high – about one in five American adults – according to a new study, with the number of self-described atheists and agnostics hitting a peak of 6 percent of the U.S. population. Photograph taken inside a Catholic church in Kansas City, Mo. on Oct. 9, 2012.

Labeled “nones” because they claim either no religious preference or no religion at all, their ranks have hit 46 million people. Much of the growth is among young people — one in three U.S. adults under 30 are now considered nones.

The report also found that the number of self-described atheists and agnostics has hit a peak — 13 million people, or 6 percent of the U.S. population. That’s a rise of 2 percentage points over five years.

And while the “nones” are growing, Protestantism is on the decline, shrinking from 62 percent of the religiously affiliated in 1972 to 48 percent in 2012. Meanwhile, the number of U.S. Catholics held steady, at about one in four Americans.

“These are continuations of longer trends in American religion,” said Greg Smith, a lead researcher on the study, as he and colleagues presented the findings to the 63rd annual Religion Newswriters Association conference here. “I think it goes without saying these are pretty significant changes in the American religious landscape.”

With some pretty significant implications, too. The study shows that “nones” lean heavily Democratic — 75 percent voted for Barack Obama in 2008, about the same percentage of evangelical Christians who voted for John McCain.

John Green, director of the Ray C. Bliss Institute of Applied Politics at the University of Akron, said the Pew survey showed the unaffiliated have become a large and important constituency of the Democratic Party — perhaps larger than black Protestants, who turned out in large numbers to support Obama.

“It may very well be that in the future the unaffiliated vote will be as important to the Democrats as the traditionally religious are to the Republican Party,” Green told reporters.

Researchers also found that almost two-thirds (65 percent) of the unaffiliated think it is not important for a president to have strong religious beliefs (compared to 29 percent of the general population), and 54 percent say it makes them “uncomfortable” when politicians talk about religion.

Ryan Cragun, an assistant professor of sociology who specializes in the nonreligious at The University of Tampa, said the study’s findings offer clear warnings for both political parties.

“The point politicians need to get is that it is time to stop pandering to the religious because there is a growing percentage of the population that does not want to hear that stuff,” Cragun said. “It is time for them to realize that they are going to be left behind if they do not do that.”

Still, claiming no religious identity does not mean an absence of religious beliefs, the report found.

The majority of “nones” — 68 percent, including some who say they are atheists — say they believe in God or some form of higher being. Half say they feel “a deep connection with nature,” and 20 percent say they pray every day.

Why do the nones continue to grow? Smith attributes it to the natural replacement of older, more conservative generations with younger, more liberal ones, as well as a worldwide rise in secularism among developed nations.

Another interesting twist to the study’s findings is how broad-based they are.

“The change is occurring among both men and women, those with college educations and those without, within several income levels and in all regions of the U.S.,” said Cary Funk, another of the study’s lead researchers. “The growth does tend to be concentrated among whites, with no significant change with blacks and Hispanics. “

The survey was conducted by digging deeper into material gathered by Pew and other organizations from 120,000 respondents between 2007 and 2012, and from the General Social Survey, with data dating to 1972. 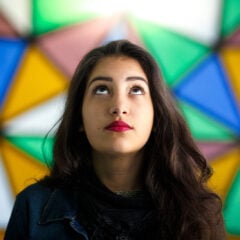 Opinion
Faith in numbers: Behind the gender difference of nonreligious Americans